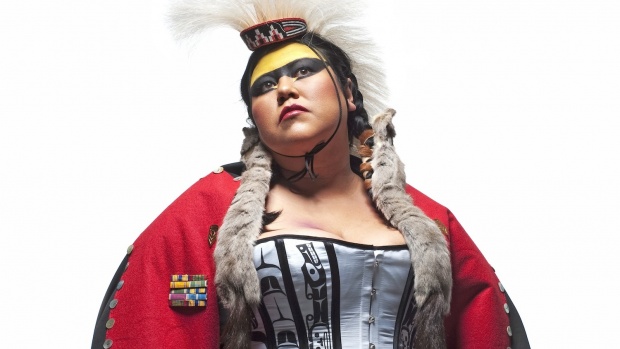 I see the colour red and think of a beating heart, of red velvet cake, of ladybugs, of my road bike, my son’s bike, his Halloween fireman costume, of Swedish berries, and my favourite shirt which I borrowed/stole from my mother this summer. I am realizing that I hold a very naive notion of red. After seeing Beat Nation: Art, Hip Hop and Aboriginal Culture at Montreal’s Musée d’art contemporain, the colour red lingers in my head. Prevalent in all of the exhibition galleries, the colour was not only incorporated into the majority of displayed works, it felt activated. It glowed, flickered, danced, and provoked. It is hard to ignore red. It’s too electric.

Red is seductive, a force. It is often the colour of revolution. In high school, to obtain a shade of red on a mood ring meant that I was feeling energetic, excited, and adventurous.

Turning the corner to enter the exhibition at MACM, I was confront with a large neon thunderbird hanging straight at the end of the hallway—a short requisite pathway before accessing the large open rooms where the rest of Beat Nation continued. In the dark hallway, Duane Linklater’s sculpture, Tautology, radiated a powerful red glow that seemed to act as a precursor for the rest of the exhibit. Tautology: a self-reinforcing repetition of an idea, statement, or word. Linklater adapted the outline from one of Norval Morrisseau’s classic paintings, modifying the medium, technology, and colour scheme to construct an appropriated reiteration. As I walked down the path, I became enveloped in red light—it reflected off all corners and borders, pervading myself in addition to each and every visitor to the show.

For the curators of Beat Nation, Kathleen Ritter and Tania Willard, and for the participating artists, red carries with it loaded connotations. During European colonization of the Americas, red was employed as a colour metaphor for race, leading to the identification of natives as redskins, red Indians, and red man, among other epithets I’m sure. The reclamation of red by indigenous peoples has become a means to assert their role as subject, rather than object, as it reaffirms control over the representation of indigenous cultural identities.

A quote from multimedia Lakota artist Dana Claxton accompanies her displayed photo series The Mustang Suite: “red is a colour that is sacred for the Lakota and represents red power, red resistance, and the red Nations of North America.” The series shows a family, each member dressed in red alongside their own version of a “mustang”—a status object that represents autonomous mobility. Mobility: the ability to move. But under what pretenses?

In thinking about the overwhelming red revealed in Beat Nation, I realize that I will never be able to fully comprehend the significance and implications of the colour as it hold for many of those of aboriginal descent. As closely as I engage with the exhibit, research the artists, and analyze aboriginal history in North America, as someone with a settler and immigrant heritage (French Canadian mother, Egyptian father), I sense a gap of knowledge that exists for myself in environments like Beat Nation.

The colour red is powerful, yet ambiguous. The only way to speak to and with Beat Nation is to negotiate my imbued associations and orientation alongside the heavy terms and aesthetic qualities carried in the artworks. I wonder, can red be translated? 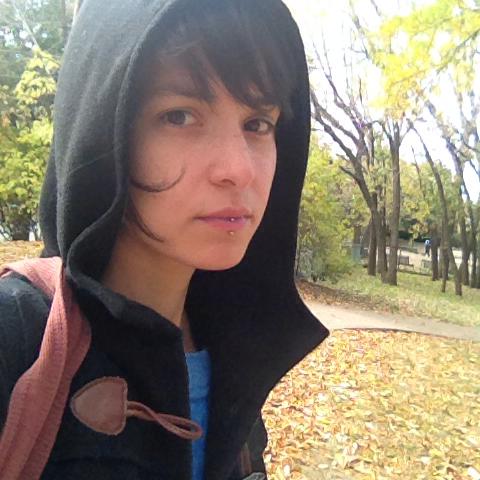 Chantale Potié is a writer, researcher, and former bookseller. She is pursing her MA in Art History at Concordia University and works as a researcher at the Montreal Museum of Fine Arts.