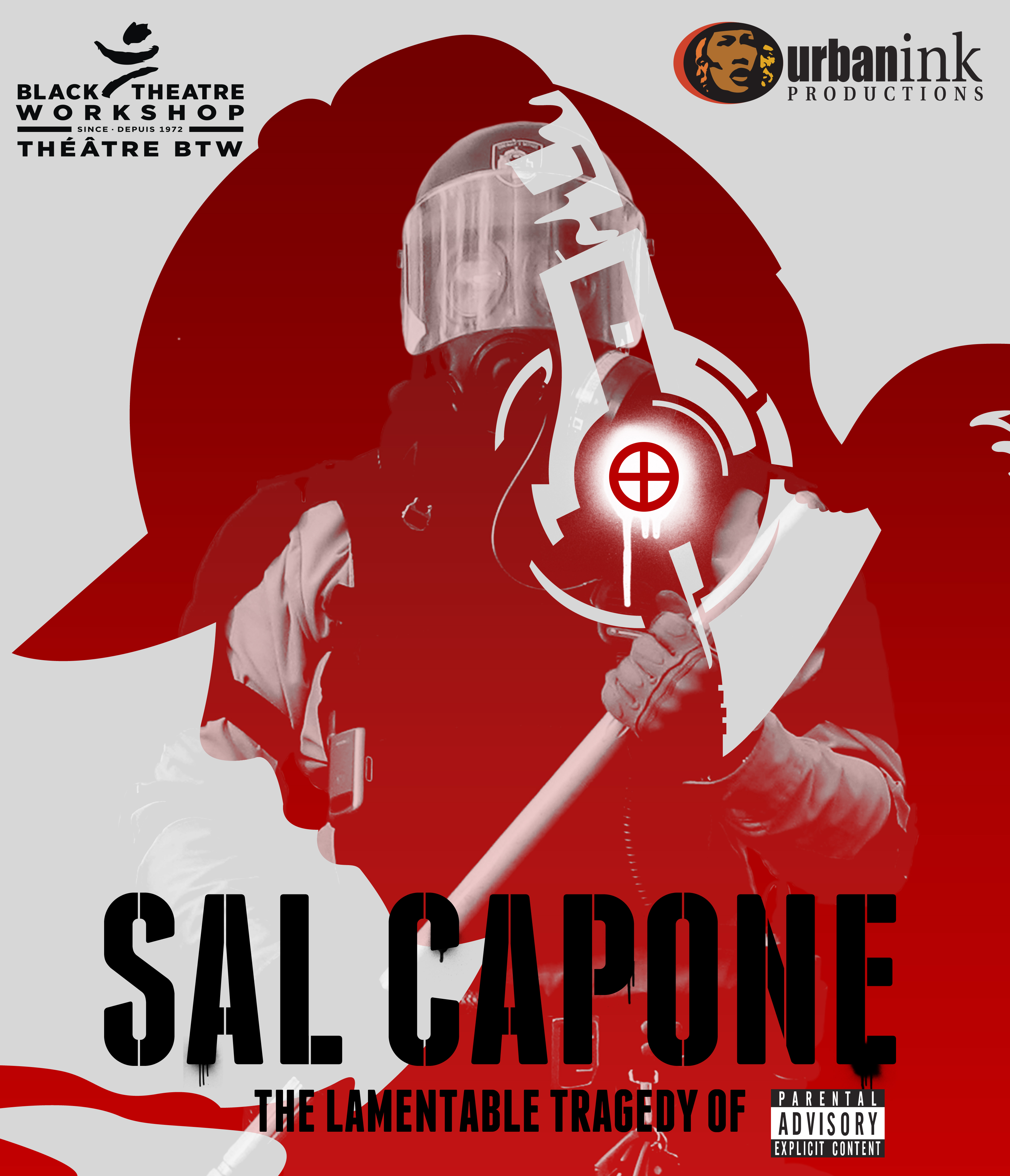 The history of racial relations in North America has certainly been a topic of interest amongst filmmakers and playwrights in recent years, and one in which audiences have been happy to engage them. One need look no further than the recent successes of Django Unchained, Fruitvale Station, or the hype around 12 Years a Slave to see the fascination that the issue has provoked. It’s no small feat then that Omari Newton’s play Sal Capone: The Lamentable Tragedy of showcases a powerful new perspective on the subject that gives consideration to multiple viewpoints without concealing the vehement anger underneath it.

As the audience enters the theatre to the sound of gunshots, sirens, and Pusha T’s “Numbers on the Boards,” it’s easy to miss the title character (played by Tristan D. Lalla) sitting with his head enveloped by a hoodie on one of the benches that compose most of the sparse set. It’s a powerful decision by director Diane Roberts that indicts the audience in the ignorance of black youth without feeling didactic.

Once the lights go down and the play actually begins, Lalla is far from inconspicuous. He brings a righteous fury to Sal (also referred to by his birth name, Freddy) that matches the ire in Newton’s script. He’s particularly strong in the slam poetry-esque soliloquies which serve the multiple functions of developing his character, promoting a political agenda, and comprising a good deal of the play’s diegetic music. It’s a credit to Newton’s versatility that the musical numbers are compelling enough in their own right to not feel like mere plot devices. The references to Nas, Public Enemy, and Eminem interspersed throughout, and the feeling of authenticity which underlies them, show Newton to be both a fan of hip-hop and a scholar of its nuances.

Not that the music is all that’s interesting about Sal Capone.  The story, narrated by First Nations drag queen Shaneney (played by Billy Merasty) concerns Freddy and the hip-hop group he has with his two friends Jewel and Chase (played by Kim Villagante and Jordan Waunch). When their DJ and friend Sam is shot nine times by the police, they find themselves in a quandary— do they go through with their album release party or put it off in Sam’s honor? At this point, the play splinters off into conversations between two groupings of the characters, which shed light on different reactions by minorities to oppression. Freddy responds to the violence by insulating himself in his room and composing reactionary lyrics which shock and offend his sister Naomi (played by Letitia Brooks). With her character, Newton’s writing falls short of the depth which he affords the rest of the cast. His portrayal of Naomi verges on caricature throughout the play. Though her resistance to protest forms an interesting contrast with Freddie’s rebelliousness, her plucky obstinacy doesn’t quite yield a fully believable character. Here, Newton lets allegory interfere with his drama—he clearly wants to show Naomi and Freddy as symbolic of opposing reactions in the black community to oppression, but his desire to depict this opposition leads him to creating a cardboard character.

The other group consists of Chase and Jewel. Jewel wants to use Sam’s shooting as an opportunity to protest police violence, whereas Chase thinks they should ignore it in the media for the sake of keeping the publicity around the group positive and unassociated with the shooting.  Once again, Newton’s aspiration to make a point gets in the way of him writing Chase as a more dynamic character. He’s meant to symbolize the corporatization of hip-hop (as further emphasized by the omnipresence of his iPhone), whereas Jewel stands in for its proud, independent voice. Their dialogue functions more than adequately as a discourse on the status of modern hip-hop but fails to make the audience care about Chase as a person.

However, the one dimensional nature of Naomi and Chase is more than made up for by Jewel’s multivalent vibrancy. Villagante herself is an up-and-coming rapper, and her skill and energy could easily make her a future star (it’s not hard to imagine her having an appeal similar to, say, Angel Haze). She brings an exuberance to Jewel that leads to her stealing many of the scenes she’s in.

Newton’s drama is further strengthened by his unwillingness to settle for simple conversations.Rather than only discuss discrimination in terms of black- white relations, he also looks at biases against homosexuals, Asians, and women. This decision lends the play a complexity, which it might otherwise lack.

Sal Capone is an angry play, though Newton’s rage (for the most part) doesn’t get in the way of his intelligence. It’s hard to know how much of an audience a play that reaches conclusions as grim as this one does about North American race relations will have. Many critics have pointed to the primarily black cast of The Wire and its look at racism from their point of view as reasons for its abysmal ratings. Though there has been a vogue for works on race recently, most of them either don’t come from a black perspective or don’t have the fury lurking beneath them that Sal Capone does. However, Spike Lee proved with Do the Right Thing that a black artist can turn his indignation into something that will resonate with a large audience, so perhaps Sal Capone can find some of that success.

Max Bledstein is an undergraduate at McGill University studying Music and English Literature. He is a staff writer for the Arts and Entertainment section of the McGill Tribune. Max is originally from New York City.