“The Sagrada Familia is the most hideous building in the world.”–George Orwell 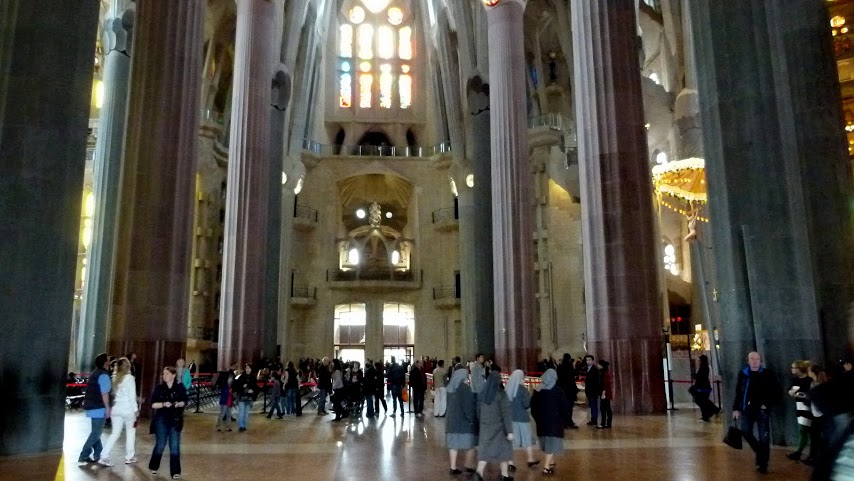 2026. Projected date of completion. When is a church complete? This is not a literal question referring to resteeplings and maintenance that must be done over the years; this is a question of what a church is. But let us look at the literal, too: a tradition in Mitterfirmiansreut, Germany calls for the construction of a church made of snow and ice. It melts every year and then is rebuilt. Is it the same church the next year?

Pipe organs. The organ at the Sagrada was not added until 2010. It is generally agreed upon that the world’s oldest playable pipe organ, built around 1435, is located in the Basilica of Valère in Sion, Switzerland. The largest pipe organ is the Boardwalk Hall Auditorium in Atlantic City, NJ. It was built between 1929 and 1932. It weighs 150 tons. It is no longer operational. Broken music. What is the world’s smallest pipe organ? Nobody knows. Pipe organ as memorial. The “hero organ” built by Oscar Walker in the fortress of Geroldseck in Kuftstein, Austria. Playing the organ is meant to serve as a tribute to those killed during the World Wars.

Mortality. Gaudi knew that the church would not be completed in his lifetime, but he was content to leave plans behind. He also explained his plans for the Sagrada to younger architects and other associates. In this way, he was ensuring that the church would live on. Even Gaudi couldn’t be sure the church would ever be finished after he was gone. Gaudi’s death. 1926. Hit by a tram and looking like a beggar, so no one would take him to the hospital in time. He asked for a crucifix to hold when he died. To build something you will never see finished. To build something at all. To not know.

Bell towers. The only bell tower whose construction Gaudi lived to see was the one dedicated to Barnabas, finished in 1921. An apocryphal “Gospel of Barnabas” mentions Mohammad by name and claims Jesus was not the son of God but a mere messenger, and that he rose to Heaven without being crucified. Furthermore, Gaudí studied music and planned for the bell towers to have tubular bells (yet to be created) that could play more complex music than other churches’ bells could. Tubular Bells was the name of the debut album released by Mike Oldfield when he was only 19, the piano solo of which is known as the theme from The Exorcist despite the fact that it only plays briefly in the film. 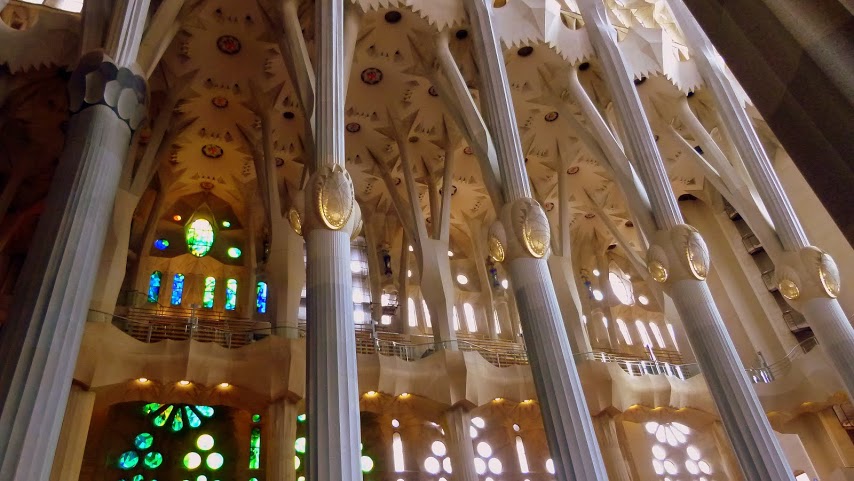 Gaudi changed his mind often during the design and construction of the Sagrada. He left instructions with his workers, but who’s to say they wouldn’t have been undone by his discovery of a majestic new rock, a shape that was also new to him?

Speaking of rock. Only porphyry stone is strong enough to support the dome. Porphyry stone, which now refers to any igneous rock, used to refer to the color purple. It shares an etymologyical root with porphyria, a metabolic disorder associated with discoloration after being exposed to light. Gaudi said, “Glory is light, light gives joy and joy is the happiness of the spirit.” He nicknamed the Sagrada Familia “The Church of Harmonious Light.” Can light be harmonious? Does light have a sound? Light travels faster than sound, so therefore light cannot, in fact, be harmonious.

Back to rock. Part of the nativity façade is made of rock from Montserrat. Gaudi was fond of comparing the textures and edges of the Sagrada Familia to the masiff there. There is a plaque in a Montserrat cavern that reads “Lloc d’inspiració de Gaudí” (Place of inspiration of Gaudí).

Another virgin. Montserrat is the birthplace of Catalonia’s patron saint, La Moreneta, the Black Virgin of Montserrat. She was declared the patron saint back in 1881 so you know it has to be true. Her hymn begins, “April rose, dusky lady of the mountain chain,” so she is sometimes known as the “Rose d’Abril.” 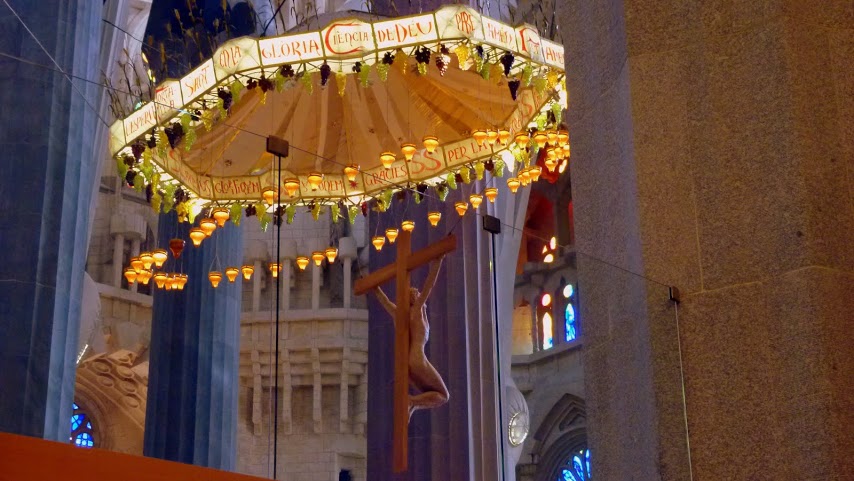 Real life. Wildlife. Instead of gargoyles, scarcely to be found in the wilds near Barcelona, Gaudi wanted his gargoyles to be representative of the creatures displaced by the building of the church. A lizard, open-mouthed, with a question mark tail. To accurately represent the Massacre of the Innocents, he had plaster casts made of stillborn babies. He raised a donkey up the side of the church to see how it would fare in a nativity scene. He attended deaths at hospitals so he could recognize the instant when the soul departed. The British architect David Mackay says the Sagrada is not Gaudi’s real-life. He says it is a tour through one of Gaudi’s plaster casts. Perhaps.

Fruit. And Ezekiel. The Sagrada Familia features gigantic baskets of fake fruit, each fruit weighing tons. Gaudi was inspired by the promise of Ezekiel 47 in his construction of the Sagrada Familia. Please note these verses: “Fruit trees of all kinds will grow on both banks of the river. Their leaves will not wither, nor will their fruit fail. Every month they will bear fruit, because the water from the sanctuary flows to them. Their fruit will serve for food and their leaves for healing.” (Ezekiel 47:12)

Eyes. Josep Maria Bockabella, the bookseller who commissioned the Sagrada, dreamed of an architect with piercing blue eyes. When he saw Gaudi’s eyes, he knew he was right for the project. Le Corbusier did not have piercing blue eyes. Arvo Aalto’s eyes were lighter, but not piercing blue. Both men signed a petition in the 1960’s that the Sagrada be left unfinished or assigned to a young architect. They said the church was not in keeping with Gaudi’s desires. An unfinished church was also not in keeping with Gaudi’s desires.

Accidental death. One would be remiss to talk about Gaudi without the phrase “hit by a tram.” It was not the self-imposed starvation he undertook before beginning the Sagrada that killed him, though that weakened him so much that he had to be helped out of bed. It was an ordinary tram, one passing on June 7, 1826 as Gaudi walked to prayer and confession. An ordinary tram, the kind that happens to kill ordinary people, and the kind that killed Gaudi too, presumably on an ordinary street. It was on the Gran Via de les Corts Catalanes between Girona and Bailén streets where he was struck by a passing tram and lost consciousness. Having no identification, he was presumed a beggar and not given proper medical care. If it were the custom to give even beggars medical care, would Gaudi have been saved? Was he able to point at the buildings all around him, to take his rescuers on one last tour of his accomplishments? A hospital chaplain, too late, recognized him. He died June 10, 1926. He was buried in the church of Our Lady of Mt. Carmel in the Sagrada Familia. The crypt is one of the few pieces finished before Gaudi took on the basilica. It was not his work. 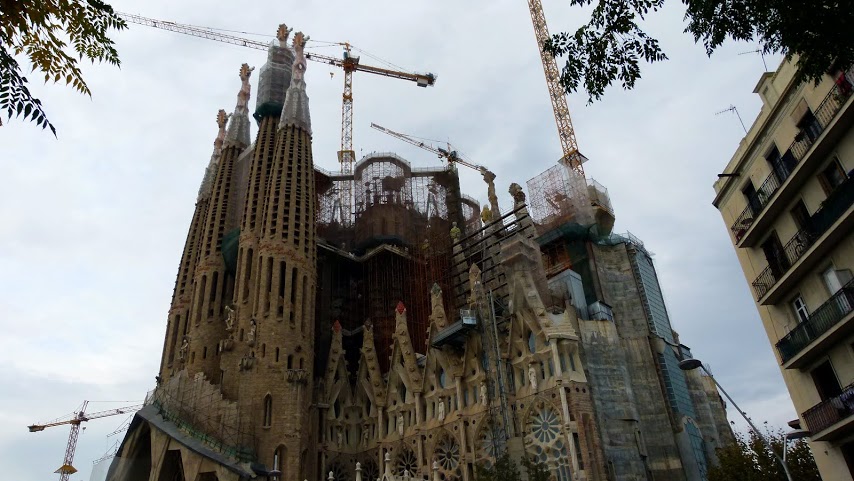 Scaffolding. The Sagrada Familia has never been seen without scaffolding. Is the scaffolding part of the church, then? What about the cranes? In Florence, in 1418, there was a problem with construction on Santa Maria del Fiore, the new cathedral of the city. There was not enough timber in all of Tuscany to make scaffolding that would support the construction of the dome. In 1419, the Arte della Lana, the wool merchants’ guild, held a competition to see who could resolve this. Filippo Brunelleschi won the competition and became known as one of history’s greatest architects. Every day, he would walk up lunch food and watered-down wine to his workers so they wouldn’t tire themselves out going up and down the construction edifices all day. Scaffolding is not uncommon at cathedrals. Renovations at London’s St. Paul’s began in 1996, with the scaffolding removed in 2013. To commemorate the removal of the scaffolding, St. Paul’s held a competition to submit your best photo of the cathedral.

When the scaffolding is removed from this essay, please submit your best photo of it to me.

* All images credit to Janine Bischoff

Erin Lyndal Martin is a writer and artist based in Madison, WI.