I have spent much of today mesmerized by online video clips. It’s the usual YouTube trail of one to the next, yet this is the future that awaits you too, when reading Redell Olsen’s newest work, Film Poems (Les Figues Press, 2014).

Film Poems is a collection of five poetic sequences – that is, unified poems of over 20 pages broken down into multiple shorter sections – spanning Olsen’s performance projects from 2007 to 2012. Olsen is known for reading her work in the semi-dramatized context of film screenings, alongside found or reorganized footage. The text itself is often harvested from various sources. “A Newe Booke of Copies,” one of the poem sequences, repurposes words from treatises on penmanship and needlework, specifically an Elizabethan manual on how to achieve perfect handwriting. Although found poetry, Olsen’s work is not derivative; she weaves together short phrases or single words from multiple texts into a poetic vocabulary which is wholly her own. Throughout, lyricism is interposed between playful sections, developing according to sound rather than syntax. Indeed, it is one of Olsen’s strengths that she can avoid full sentences altogether, while maintaining a sense of coherence, leading the reader with keywords alone to a clearly articulated thesis.

Olsen brings together different media – in specific, word and image – yet it is refreshing that her multi-disciplinary collaborations tend to evade, rather than embrace, fusion. The film footage does not illustrate the text; the text does not describe the footage; as Olsen points out: “not writing as refabrication” (118). The different media co-exist. They may be enjoyed separately or juxtaposed, as poetry, as performance, as film. They are strands that sometimes intersect, but also diverge, contradict and chafe at each other. When Olsen performs “A Newe Booke of Copies,” for example, her voice strains against the increasingly loud film soundtrack. Whereas the film supposedly creates ambiance and adds context to the words, it simultaneously acts independently, subverting the poetry, voiding it by rendering it just about inaudible.

The interaction and simultaneous negation of one creative medium by another is thematized throughout Olsen’s collection. Although film and the visual in general are integral additions to the poetry, Olsen deliberately composes poems, which undermine the visual. For example, “Bucolic Picnic,” a poem sequence about textile and tapestry production, a poem littered with references to colours and light, continues to assert that writing is a form of camouflage meant to obscure the image. Here she writes: “future signatures/ set to confuse […] colour,” “rewrite […to] blend broken surrounds” (76-7). Or again, “all organs to conceal […] used by the women who did/ the pinceautage or penciling” (78). Similarly in “London Landmarks,” famous architecture, monuments and parks in London are replaced by Olsen’s insistence on orthographically breaking down the word “landmarks.” What one finds, instead, is a writer’s hand marking the land.

Repeatedly, the supposedly collaborative visual material proves to be a self-referential commentary on writing. When Olsen introduces the film footage of women sewing, she soon discards it, transforming it into a simile for writing: “lines ready sewn written” (60). Video clips of women swimming are transfigured, as arms weave a cursive script through water (“The Lost Pool”). Olsen camouflages visual images as words. Olsen reasserts moving picture as writing process. Olsen is “against drowning writing” (118). The poems may be multi-media, but the juxtaposition rather than integration of these media ensure that they hover on a meta-level over the writing, allowing Olsen to weave, to stitch, to employ diverse metaphoric articulations of her poetics. As highlighted on the last page of the last poem sequence, “SPRIGS & spots”: to “discover her self […] fall to writing” (160).

Olsen’s new collection is labeled Film Poems, but her writing is at heart anti-cinematic. 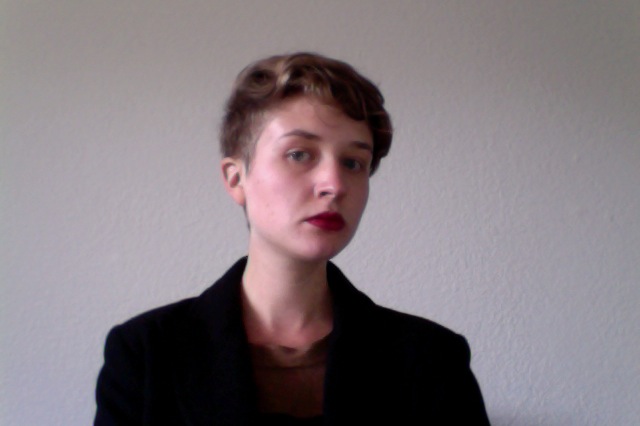 Klara du Plessis is a poet residing in Montreal. Currently, she is working on a book project, tentatively entitled Hell Light Flesh.  Klara wrote and performed in a multi-disciplinary show of poetry, music and dance, Medusa Shaved (Montreal, December 2013). She was shortlisted for the 2013 Robert Kroetsch Award for Innovative Poetry, and curates the monthly Résonance Reading Series. She holds a MA degree in English Literature from McGill University.