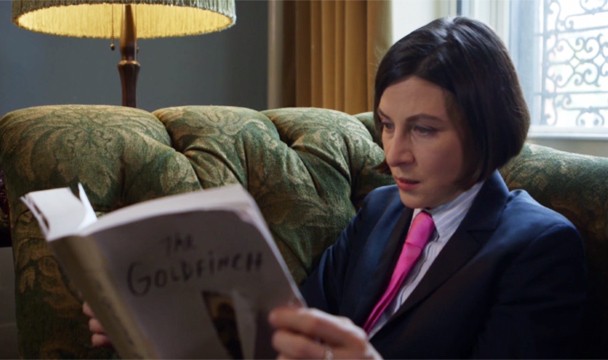 Twenty pages into The Goldfinch (Little Brown and Company, 2013) I started having chest pains, accompanied by shortness of breath. My wrist tingled. I figured it must be something I ate, or maybe early signs of a heart attack. But the most obvious source of discomfort lay close at hand, no more than twelve, maybe fourteen inches from my face.

Donna Tartt’s long-awaited new novel is a 771-page hardcover, weighing in at 1.08 kilos, which is a lot to support during so many hours of reading. It’s a mesmerizing experience, one I wouldn’t want to repeat soon. How often can you afford to put your life on hold for a novel?

The narrator, Theo Decker, New York-born, late twenties, begins in a hotel room in Amsterdam and flashes back to age 13 when a terrible explosion in a museum killed his mother and put a small, precious oil painting into his possession.

Here is a chronology of how this book won me over, and what to expect, if you read like me:

Donna Tartt spent ten years writing her third novel, and won the 2014 Pulitzer Prize for her trouble. James Wood took her apart in The New Yorker for relying too heavily on genre elements, being too bulky, commercial. I don’t agree. Neither did anybody on Goodreads.

Tartt’s project is thoroughly modern. The enemies of concentration are so fierce these days that a truly ambitious writer should be praised for taking extreme measures to lure readers into her work and keep them there for as long as possible. The sheer weight of the book, the time it commands, is part of its power. The ending is perfect. Moral, conclusive, open.

Guernica Editions will publish Holy Fools, a novella and two stories by Marianne Ackerman in the fall of 2014. This post appeared originally on The Rover and is posted here with permission from the author.

Photo from a reading with the BBC’s Kirsty Wark, available here.