Bitten by doubt, I pick at my prose. I stop writing. Though the novel is nearly done, a crucial element is missing. To prevent myself from destroying the manuscript, why not turn it into something other? Could it “coexist” in a second form?

In the novel the year is 1974 and a teenaged German, named Heinrich, longs to escape the claustrophobia of his hops-growing hometown of Tettnang. In 1980 he will arrive in Canada. It is still the era of letters and postcards. From Pangnirtung, on Baffin Island, he’ll hike alone up the Weasel River to the Turner glacier and back. This should take him two weeks. But for reasons unknown to him, he’ll be yanked from the 20th century and deposited in the 21st. When he returns to Pangnirtung, thirty years will have vanished though he is no older. A computer-nimble, Inuit teenager will befriend him, while he struggles with his predicament.

I experience a sudden hunger to send Heinrich Schlögel travelling in fragments, away from me, through “real” time. What if I were to copy the novel onto the back of postcards and drop it, bit by bit, into to the machinery of Canada Post? I gather postcards into a small mound. 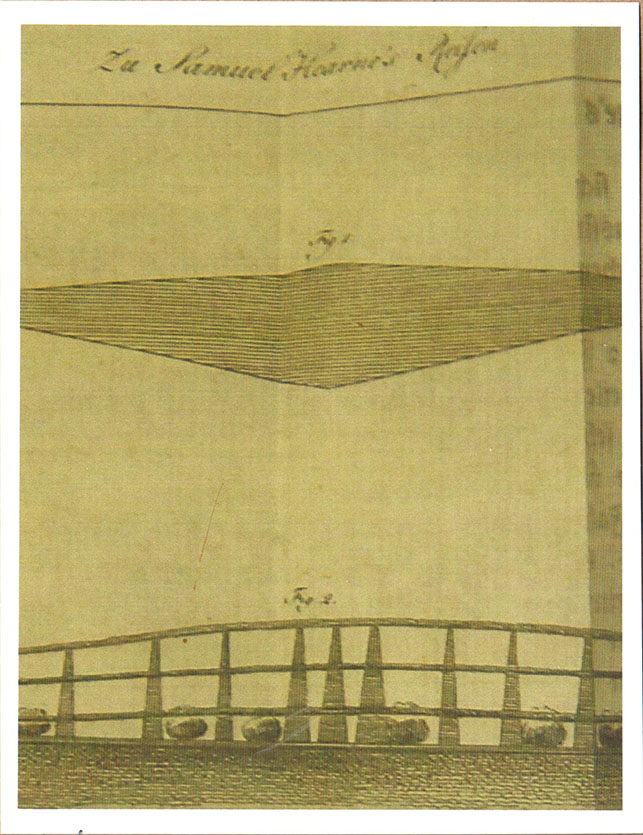 From the AGO I buy crisp new postcards, and in a used bookstore where the vintage postcards, arranged by theme, fill several shoeboxes on a shelf, I spend more money than I’d intended. I put out a call for donations and soon am inundated: souvenir images from the Freud Museum in London, Star Trek, Ikea, Disney Land, A New Brunswick amateur taxidermist who stuffs squirrels and dresses them in costumes. The possibilities multiply. Can such random cards successfully illuminate my novel?

I go online, search for specific images: photos, old or recent, of Pangnirtung or Tettnang. Vacationers have indeed posted holiday snapshots of both. I contact several to ask permission to reproduce their shots of Tettnang’s town square, of the hops fields and orchards surrounding the town. A few of my own quick shots, taken on a two-week hike in Auyuittuq Park, on Baffin Island, become postcards. I email the National Archive of Canada, who grant me permission to reproduce, for use in an art project, a selection of photos taken on Baffin Island in the nineteen twenties and fifties; most of these are portraits of unidentified, de-named people.

In January 2012, I begin transcribing. One double-spaced, printed page of the manuscript becomes four handwritten postcards. I press on. For the duration of the experiment, Heinrich, shredded and strewn, will travel around the globe; he’ll escape beyond the last sentence of the novel to experience unwritten encounters with readers. Though still a prisoner of the text, he’ll flee my grasp; and while he voyages I may discover the novel’s missing element. 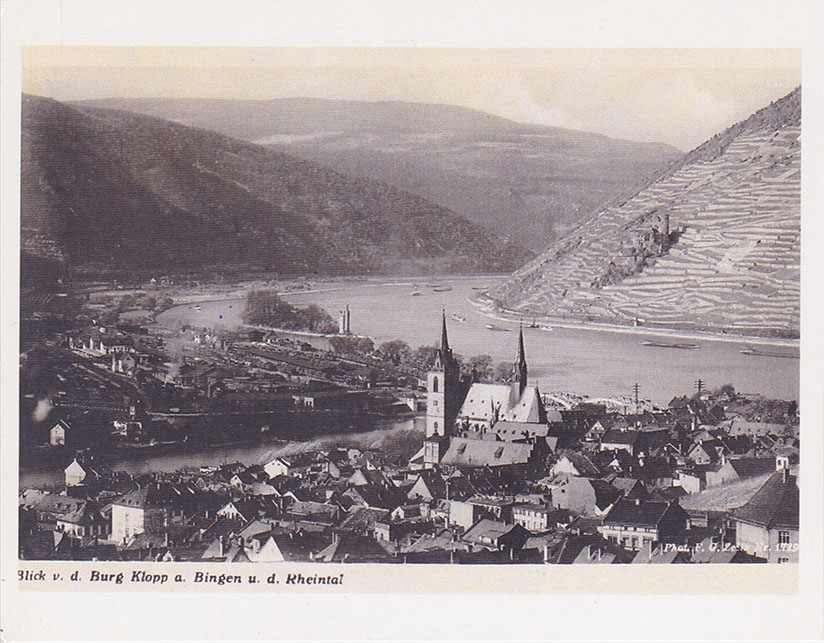 In a large cookie tin containing photos and letters that once belonged to my father, I come across a postcard of the Rhine, purchased by him at the age of twenty-two. A young Canadian cycling through Germany in 1937, his adventure was the reverse of Heinrich’s. I scan his Rhine postcard,and on to it transcribe a passage from Heinrich’s hike along the Weasel river in Baffin Island. My father, when he bought the card, did not know that in two years’ time he’d be abandoning graduate school to fight in a war against Germany. How many stories can one archive tell? How many can it hide? While Canadians fought oversees against fascist Germany, back in Canada, First Nations children were being forcibly taken from their parents and placed in residential schools. 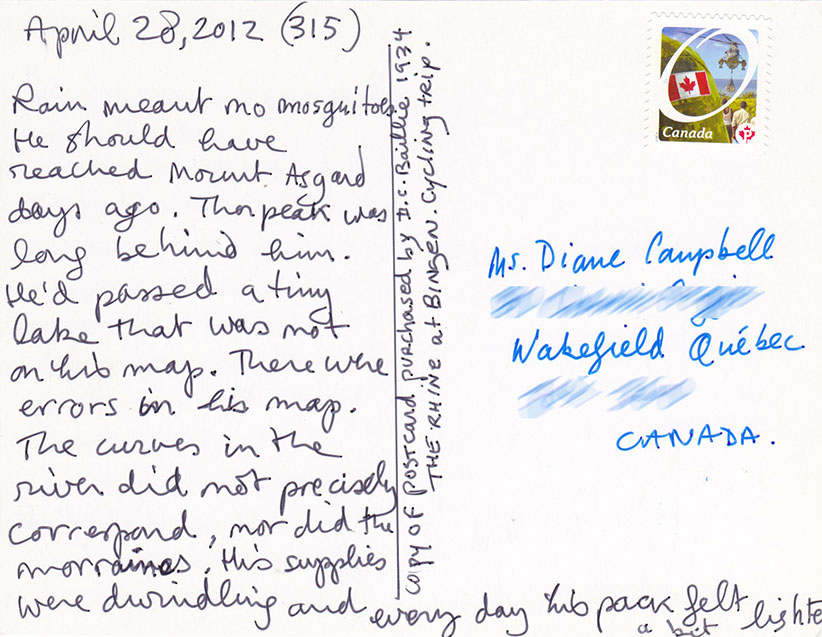 I’ve completed a sufficient number to start mailing them. Excited by the prospect of their imminent journey, yet regretful at having to part with them, I hesitate. The act of mailing them feels final; I sense that I have no right to ask that the postcards be returned to me. I may never see them again. I am givingthem away. Why not scan them and create a digital archive before dropping them in the mail? Why not? Later, I am seated in a bar, holding up a postcard, eagerly reading aloud. My listener remarks that hearing the words, while his eyes are on the front of the picture postcard, allows his mind to move more fluidly between picture and text. Aha. What if postcard recipients were willing to record themselves reading, and these audio files were dropped in to the archive?

Over fifty postcards have been scanned and archived by my dear friend, who is either crazy or has not yet realized the proportions this project may take on – that we are creating a creature with tentacles. Already, certain passages “belong” to particular readers, whose recorded voices inhabit the archive. Though the words are mine, I can no longer separate them from the voice of the person who received them in the mail, and took the time to read them aloud.

In 2013, the remarkable Canadian composer, Nic Gotham, who lived from September 1959 to July 2013, was commissioned to write a ten-minute work in response to the manuscript of The Search for Heinrich Schlögel. He selected as instrumentation: clarinet, piano, cello, and percussion. It became his final work, and was completed in Kensington Hospice. 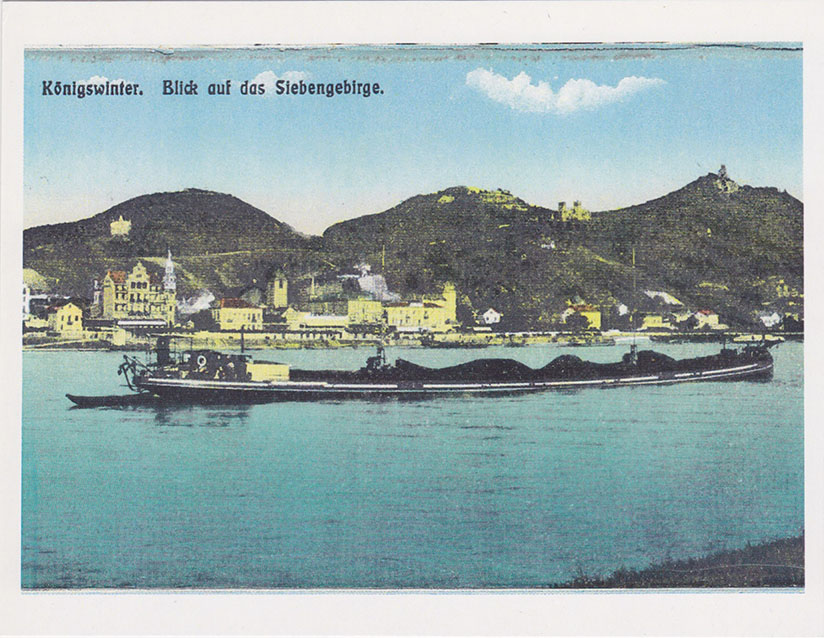 The Schlögel Archive, including Gotham’s music, performed and recorded by Array Music, will be “installed” in the Koffler Gallery, Toronto, in Spring 2015.

This archive exists thanks to the extraordinary generosity of my dear friend and collaborator, Greg Sharp, the archive’s source of tech-skill and labour; huge thanks to all who have received postcards and recorded themselves reading; I thank everyone who has donated postcards for me to write on. I thank the Ontario Arts Council for their support.

The novel, The Search for Heinrich Schlögel, will appear in Sept. 2014, as a book, published by by Pedlar Press in Canada, and Tin House in the US. 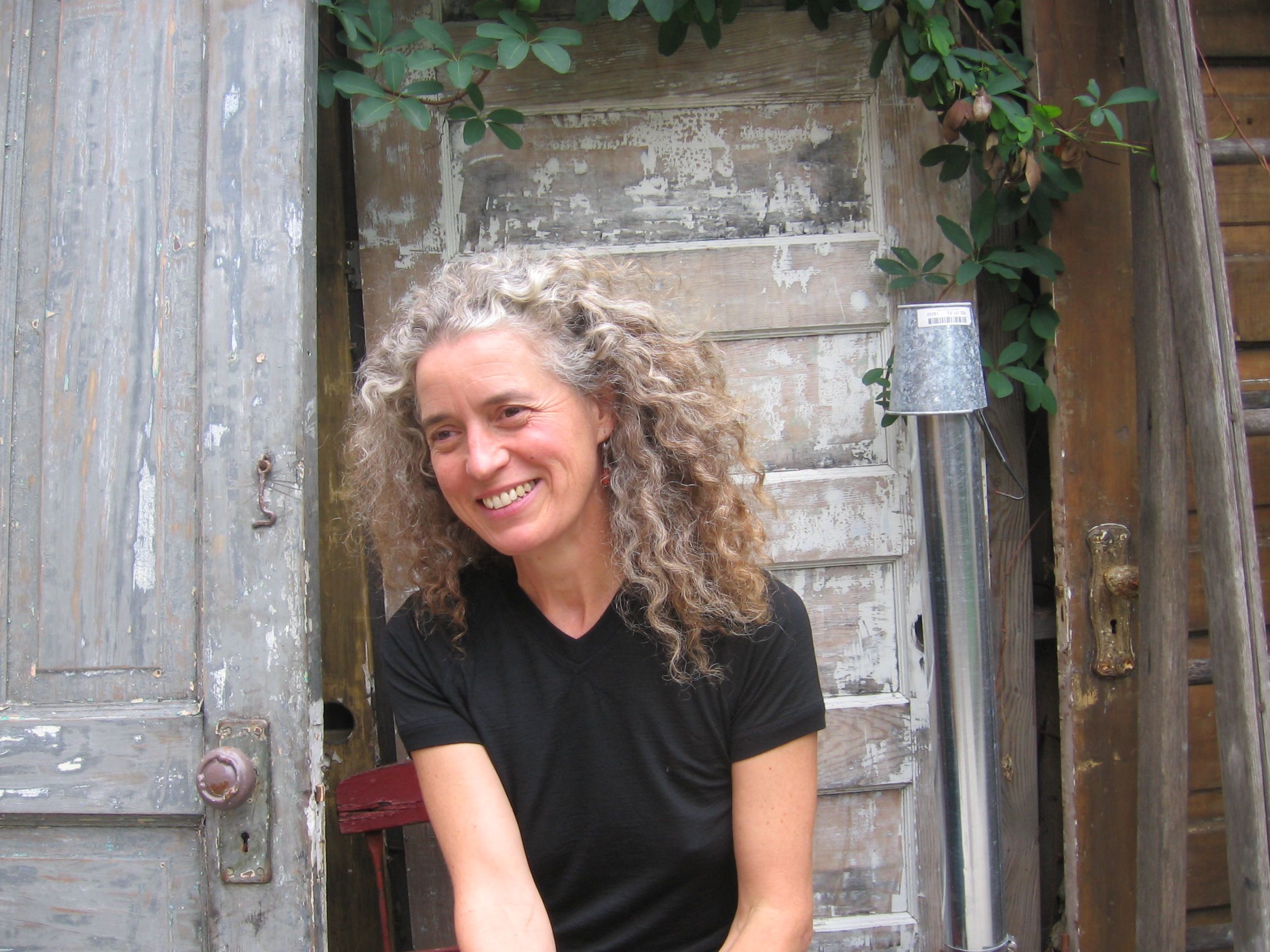 Martha Baillie’s fourth novel, The Incident Report, was nominated for the Scotia Bank Giller Prize. Her new novel, The Search for Heinrich Schlögel will be released in September, 2014, by Tin House in the US, and Pedlar Press in Canada. For the past two years she has been working on a multimedia project, to be installed in the Koffler Gallery in April 2015, and which you can visit, now, at www.schlogel.ca.

In preparation for this project, Martha crossed the Arctic Circle on foot, hiking in Auyuittuq on Baffin Island. Martha has written about contemporary visual art for the AGO, the Koffler Gallery, and Brick magazine.