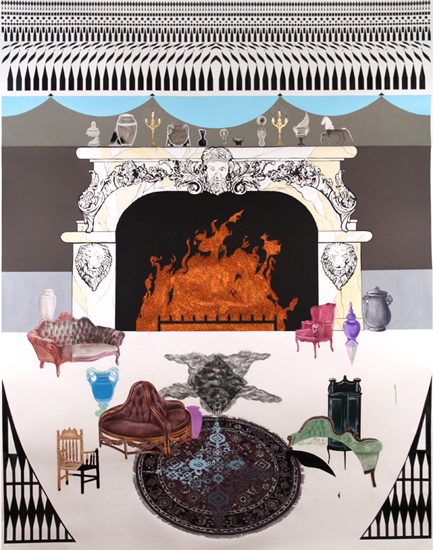 Altar for the Bourgeoisie is the eponymous drawing from Michael Young’s Coruscant Altars, exhibited in 2011 at The Rooms in St. John’s, the cultural complex that houses Newfoundland and Labrador’s provincial art gallery. Created as part of work from his Elbow Room residency, Altar for the Bourgeoisie showcases the tropes of excess among the rich and, increasingly and with an implied critique, the new middle classes.

The artifacts in the piece are delicately and skillfully rendered, perfectly replicating beautiful examples of Victorian furniture and housewares, though with colour choices and transitions that hint at pop and the fantastic. The finely captured, complex ornamentation of the fireplace and the realistic silhouette of the fire itself, done in gold and orange foil best seen in person, particularly stand out.

Touches such as the slice of negative space carved from a green sofa, the mesmerizing pattern of black shapes at the top, and comparatively plain wall paint all create interest and a nuanced, contrasting mixture of classical, modern and minimal elements. And although Young works primarily in figurative painting, this piece, along with the more recent Sleep Study, illustrate a knack for gently atmospheric yet dramatic interior scenes.

Isolating and discolouring these riches undermines their traditional legitimacy as markers of social superiority, and even communicates the absurdity with which modern ladder climbers awkwardly try to imitate the aesthetic of the past. More generally, it highlights the emptiness of economic exhibitionism while admitting and celebrating the beauty of its individual elements. Altar is certainly timely as a reflection on responses to excess in a new age of growing austerity.

A few of the mantle artifacts are unusual Egyptian items, and some of the urns and furniture use flocking powder to achieve their soft, textured light blues and pinks. Altar‘s size also makes it impressive but it avoids being overpowering, owing in part to Young’s careful use of colour gradients to create balance, such as in the oblique shadow of the rug and his weighting of the different furniture. A bar design at both corners, less busy than the black pieces up top, also helps.

Altar for the Bourgeoisie was originally hung on silver wire while at the Rooms, but awaits a home and framing at the Emma Butler Gallery on George Street West in St. John’s. 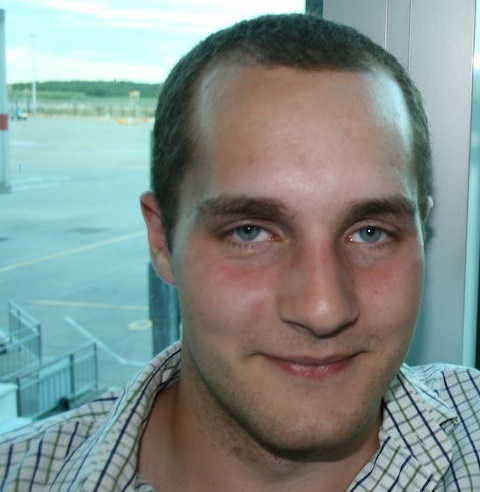 Cory Collins is a writer, artist and behaviour therapist. His work has appeared in Cordite Poetry Review, the Island Review, Off the Coast and rabble.ca, and his poetry has received two Newfoundland and Labrador Arts and Letters Awards and was specially commended in the Welsh Poetry Competition. He lives in St. John’s.