I think of the ways that I move my body across New York City. I think of the itchiness in my veins that drives me out of the apartment for a walk, amongst light on stone and eyes on me. Find a bench to sit on, read in the sunlight, or watch other bodies move through the city. I read Gail Scott’s “A Feminist at the Carnival” late at night, on the train home, and feel crazy and thrillingly exhausted with ideas, like a prophet, like I know something secret. “Women often feel stuck in a transitional gap between object and subject” (Scott 45). How to be: fractured, splitting, looking and looked at. I go out into the city and I think: look at me. And then: don’t look at me.

The narrator of Louise Dupré’s Voiceover, excerpted in Theory, A Sunday, also aches for this fractured subjectivity. “I want to be a woman without a history,” (105) she says, and later, “I’m not who you imagine me to be, I’m not the woman that I am” (109). Not not me.

I read this excerpt from Voiceover, and the preceding Dupré essay, “Four Sketches for a Morphology,” at a bar by myself. I need to be seen and to see, to be alone among people, to feel the night around me. I watch conversations that I cannot hear the words to, I watch people leave in pairs. In “Four Sketches for a Morphology,” Dupré writes that “[i]n my poetry, I constantly run up against this fact: a feminist consciousness is not a panacea,” that is, we are always writing within a patriarchal paradigm (99). Dupré goes on to say that “I write precisely in that chiaroscuro where language seeks out its patches of shadow” (99). Theory, A Sunday teaches me how to write in these dark places, these intersections of shade and light, how to write with the knowledge that my own subjectivity is one crafted by patriarchy, that there is no outside.

In her introduction, Lisa Robertson writes that, “[w]hen theory happens at home, right where life is most concentrated and messy, it’s bound to disrupt the banal and gendered dualism of public and private language” (17). Theory, A Sunday pushes me towards a kind of feminist theory making that slips in between: soft cakes on kitchen counters in the afternoon. Women in houses. Theory making as something triumphantly lazy and feminine, an everyday practice, a Sunday activity. This is how theory can become a space of revolt: by recognizing the ways in which it is lived, embodied. Robertson goes on to say that “[i]n France and in Québec, theory was not only an institutional discourse but a manual and testing ground for political revolution,” (15) that is, that theory does, theory moves through the world.

Much of liberal, second wave feminism posits its work as being a move from the body to the intellect, often resulting in a curious villainizing of feminized, corporeal spaces. This is encapsulated by Louky Bersianik’s claim, in her essay “Aristotle’s Lantern”, that women critics often internalize the grammar of patriarchal literary criticism. Facetiously parroting them, she writes: “certain women, the ‘bad ones’ will stay on the side of the flesh, while others, those who have understood, those who have crossed over to the male side of things, will at last succeed in reaching the shore of the intellect” (78). Theory, A Sunday provides a rejoinder to such politics, by valuing the work that can be done in the realm of the corporeal. 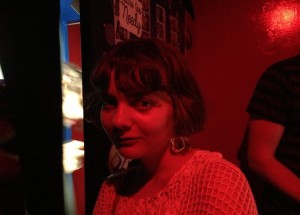 Clara Lipfert is the author of the chapbook I’ll Be Your Sometimes-Girl, as well as one half of the curatorial performance project HAG. Her work has been featured in Illuminati Girl Gang, 89plus, MIX NYC, the Scrambler, Helix Critical Project, Keep This Bag Away From Children, and Imperial Matters. Her play, What Has Been Given Cannot Be Stomached, will be presented at Dixon Place in New York City in January of 2015. You can find more of her work at hagcollective.tumblr.com.