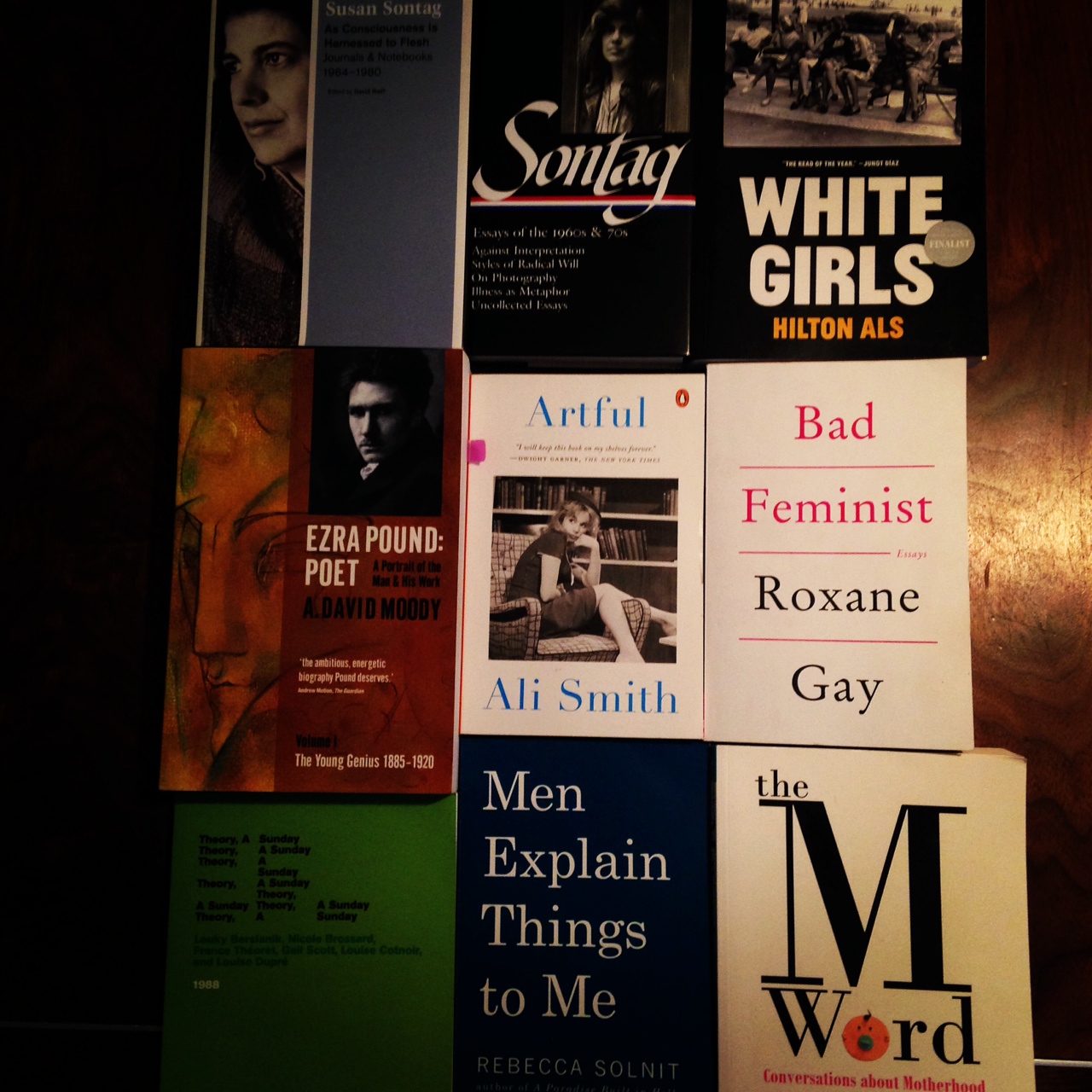 I’ve read more this year than I have in the past several years but still, nowhere near what I used to read in a given year. I understand, if I didn’t already I suppose, why there are fantasies of reading for mothers. Gone are the days when I could easily sustain a reading practice. By that I mean, the deep reading the simmers over days as you’re thinking through a book. Time that I took for granted–commuting time, cooking time, chores, walking, anything where I could multi-task the dailiness and bend my mind to the task at hand. The repercussions have been staggering.

Still, I managed to read quite a bit. Partly this is due to the new space I inhabit. There are multiple spots to read comfortably. Partly this is due to babies having now grown into 3 year-olds who go off to daycare. The following nine books above have been the non-fiction highlights. They’ve help make sense of an extraordinarily difficult year filled with questions of abuse of power in literary worlds and in police departments–culminating in massive civil unrest, the anniversary of the Montreal Massacre–and a swell of energy and organizing from new generations. So here’s to that. And to the minds that can guide us. I regret I haven’t read them all–Naomi Klein, for example…but here’s a few:

As Consciousness Is Harnessed to Flesh: Journals and Notebooks, 1964-1980 Susan Sontag, Picador 2013

This is more straightforward. Hard to believe she thought her posterity would be assured by the novel.

Excerpts from the book appeared on Lemon Hound over September and October as well as posts relating to the book. It was amazing to have Gail Scott, Nicole Brossard, Lisa Robertson and Rachel Levitsky read together at Concordia. It felt like an essential read, an essential event, an essential discussions spinning out of it. Start with Lisa Robertson’s introduction here. Find the other essays under this category. I think it’s an essential text that illuminates a significant portion of feminist writing in North America.

Moody has just published Volume 2 of his Ezra Pound biography and I can’t wait, but I have to wait. I will say I read a good half dozen books on Pound this summer and this one stood out by a long-shot. It really contextualizes the period, he’s a fluid writer, really intelligent, always on point: I  couldn’t put it down.

I’m not sure what my favorite essay is…hard to say. The essay on Flannery O’Connor was mind blowing, but so was the brief, heart-breaking essay on Michael Jackson (unlike Prince he was unable to look inward and it killed him…) or Marshall Mathers, or “The Women,” which offers a reading of Truman Capote (a real woman when there couldn’t be real women in that category of writer?) that will forever change how I think of him. I felt kinship with the palette and range of fixations but Als insights explode inside my own. I didn’t love every essay and found some long-winded, but always true. Didn’t want it to end.

Read this on a Sunday. She got me. All my assumptions. She got me, had her way with me, reminded my why fiction is fiction. I’m going to give several copies away. Really fun. I mean, I think I’ve thought about many of the things she ruminates on for a long time, and perhaps more deeply in some ways, but what she does in syncing her thoughts here really made me sit up and pay attention. Brava.

Another book I read in an afternoon. I’ll read it again. It’s slender and nourishing. If the title essay isn’t enough to sway you, her essay on rape has been discussed widely (and some fair criticism of it has been aired), and the essay on Woolf is perfect for the uninitiated.

I found this book more uneven than most reviewers but I loved it nonetheless. A bit light on even “the light” and unresearched but it’s Roxane Gay and her opinion and her readiness to share it is the point as is the emotional bravery here. I’ll read it again. Particularly the essays “Not Here To Make Friends” and “Beyond The Struggle Narrative.” These are essays we need to read.

I gave this book a rough ride earlier in the year. I stand by my points, even the point about a similar prose style that seemed to creep in. As I have said, to be fair, I should have researched that and fleshed out my argument. Absolutely. But you can see this for yourself and make up your own mind. It’s a book that I’ve gone back to and I’m happy to have on my shelf. I recommend it.

A Few More To Consider: