He had a stiff little Heidegger
one summer morn. Sipping his Nestle,
he wanted to Schopenhauer
and Chef Boyardee you.

But you were perestroika,
a fistful of nickels,
and your boyfriend was Aunt Jemima,
plus Jehovah, fused into a crystal Nietzsche.

A platter of Kierkegaard silver,
a detached puritan who became a partisan,
overnight, under a bridge, with hobos, that’s you.
You, who felt no need to Bertrand Russell me.

Sappho is mortal. Humans: portals.
You, who felt no desire to Aristotle Mozart
on the mezzanine. Felonious banjo,
mauve Ferrari, his Deleuze

her Guattari. Detachment
is indifference with a difference.

What thoughts I have of you tonight, transformers, as the power fails in a swelter, and the subway falters between stations. The charm of the failing transformers is that they deliver peace to neighbourhoods that might deserve a meal by candlelight. I remember a week of statewide black out in a similar heat wave. This was decades ago. On the second night, my wife and I invited an old timer we spotted on the street for supper. I placed a candle on the table. The man was bearded, sweaty and grubby. Over cold soup and raspberry wine, he spoke of desperate nautical voyages he had experienced, of near starvation at sea, often in superb detail. I felt his story contained alien circuitry, but my wife* absorbed the hardship of the man’s cannibalistic past and wept openly. We never told him, but she and I had dabbled at people-eating in college. In those days, our dorm had been a slow-cooker of untenable grief. Those who grabbed hold of the burning filament and climbed inside our fading bulb had made no promises, just as we had made no plans. We had been different people. Over steak, our guest half-forgot a joke whose punch-line was: you are what you eat. My wife laughed. We were like one person then, the flickering meat, the dark hallway behind where my wife was sitting, and the parts of the joke that the old man had forgotten. When respectable Americans bid goodnight to old timers, they seldom make chivalrous vows in Latin, or promise never to forget, but my wife and I did both, first over fortified sherry and blueberry pie, and a second time, on the porch, before the old man finally staggered off into the night and was consumed. Before he had left, our guest asked if he could borrow a flashlight. He asked again, as if we had not heard his words. When he was finally gone, my wife and I knew that we had done the right thing. We sat on the porch swing, and counted all the flashlights in the house. There were six. One for each of the babies that we had planned to have once the power came back on. Look, a shooting star, I said. Amanda turned to me then, smiled, and became an old man for the rest of her life.

*My wife’s unusual superpower was that she was continuously changing age and gender, on average every few months or so, totally randomly. It was beyond her control. It was confusing, and a terrific challenge to our marriage. More a curse than a gift, really.

Valerie notices a crawlspace through the side of the word ‘swan’. Inside it, a file folder on the floor. Inside that: one of seven manila envelopes unfolds into a giant living-room which Valerie enters valiantly. At the window she elbows the glass, hard. Fragments sprinkle the lawn. She tells the hobos out there on the sidewalk, “Be strong”. She tells them, “Be a swan” and to “pass it on”. She swears a stray swan-goblin scientist sent her. Exiled from the Empire of Real Life Problems, is it possible to stand on top of things? “No”, say the doubters on the sidewalk, dubious as fuck. Fricking horse shit, says the Earth, fuck you. Fuck you for not saying “yes”.

Fuck you in upper valleys
when the rivulets drop

they atomize white.
If I was lost in penitent wastelands

without fuel
I would torch my own arm

rather than scorch a single swan
for sustenance.

Fuck you, gnawing the marrow
of your own burnt purpose in service

to the vampire of vague intentions. Lover,
weirdo, that morning you hung up,
conversation itself

froze prismatic and spun, suspended
pale threads of attention. Fuck you, Valerie, I said,
without meaning to, as I touched her writhing tentacle
which gripped, in turn, my tiny tire iron. She asked why,

why the aroma of apples wasn’t apple-colored
for me, as it was for her?

Apparently, I told Valerie to remain in the acutely steamy air
that smelled of gentlemen. 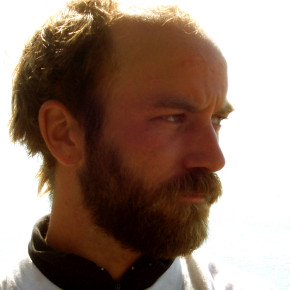 Gabe Foreman’s first collection, A Complete Encyclopedia of Different Types of People (Coach House Books, 2011) received the A.M. Klein prize for poetry, even though it was a book of reference. He lives in Montreal.