Frankie Barnet: Place plays a significant role in your work. Stories like “Wireless”, “Hellgoing” and “Another World” all seem to have an interest in exploring and critiquing cosmopolitan aspects of city life, as well as differences between city and country life. You yourself are from Cape Breton but now live in Edmonton. How important is location to your work and how does your own geographical location influence your work?

Lynn Coady: I think growing up in a place like Cape Breton made me hypersensitive to cultural differences. As a Canadian, you grow up with these self-deprecating messages that you are living in one of the most bland, homogenous cultures in the world and we’re basically all alike from sea to shining sea, so as a young person I wasn’t expecting to experience culture shock the moment I set foot off-island. But I absolutely did. So one of my earliest revelations about human society as an adult was the realization that people’s prejudices and assumptions about life and the world are determined by their surroundings to a horrific degree. I figured that out mostly by looking at myself, by understanding that the starting point for my entire worldview came out of being from Cape Breton, being rural, being Catholic, being surrounded by the Scottish-descended, being working class, being on an island, etc.

This really came home to me in the 90s when I was in a Creative Writing workshop at University of New Brunswick, workshopping the early chapters of my novel Strange Heaven, which was set in small town Cape Breton in the 80s. My classmates kept insisting that the story seemed like it took place 80 years in the past–they didn’t buy that it was supposed to be set in contemporary times. So anyway, culturally-determined differences in people–even the tiniest differences, and the way they can radically alter your perspective–have remained a fascination for me ever since. For example in “Body Condom,” Kim, from the east coast, is dating Hart, from the West Coast–and Hart is a hippie dippie type who behaves in ways that no man would be permitted to behave where Kim comes from. As a result, and even though she knows better on an intellectual level, she can’t quite bring herself to trust him.

Frankie Barnet: You work as a playwright, novelist, and short story writer. How does your process differ between each of these forms? When you first conceive of a project, is it already rooted in its form?

Lynn Coady: Yes, usually. When I have an idea for a novel, I know it’s for a novel because it feels big–the idea has sweep and I feel like I could play around with it for a very long time without getting bored. But it makes me feel tired, simultaneously, because if indeed it is a viable idea for a novel, I know I’m going to have to sit and think very hard about it for several months, making notes and mapping a way to approach the story. When I have an idea for a short story, it’s more energizing. It’s like being given a new toy to play with–there’s not that sense of, Oh Jesus I have to invest in this idea for the next two years of my life. It’s more like: Here’s something fun to noodle around with for a little while and if it doesn’t work out, no big, I’ll just pick up another toy. Short fiction can feel more playful and more creatively freeing because of its lower stakes. But losing yourself in a long form project can be incredibly absorbing and rewarding on its own terms.

Frankie Barnet: Something I found interesting in Hellgoing was how you played with sentence length to highlight some of the more absurd and comical aspects of character’s lives. One of my favourite moments of the collection comes from the story “Body Condom,” where you have the line (which is also it’s own paragraph) “Then they just did yoga for two straight days”. How do you approach humour in your work? Is it something you work at or does it come out more naturally?

Lynn Coady: I mean I’m kind of at the point in my writing where the work is done very intuitively. I get immersed in the process and I’m not thinking so much about the instinctive decisions I’m making around structure and form–I’m just working to make the story the way I want it to be. After I’m done the first draft I’ll look at it with more of a journeyman’s eye and say–oh, look what I did here with the run on sentence. I guess I was trying to get across a sense of time passing rapidly, or a sense of the narrator’s racing mind, or whatever quality I was trying to get across. And in the revising I might finesse those elements a bit, underscore them or downplay them if I think that’s what needs doing. But I’m not really thinking about them during the initial writing. And with humour usually I start out with a feel for the innate humour of the situation or the character’s predicament and those elements just kind of emerge organically via the storytelling.

Frankie Barnet: What role do you think creative writing programs play in the creative development for young writers? What role did your education play for you?

Lynn Coady: Well this goes back to my background–for me it was really important to be around other people who were obsessed with reading and writing because I was never around people like that growing up. It was important to be in a milieu where everyone comported themselves as if the art and craft of writing stories was crucial. Sometimes when people criticize creative writing programs, they take it for granted that most people grow up in environments like that–where books and art and culture have a certain primacy and are revered. And they can’t imagine other would-be artists might not have experienced that as a birthright.

You can hear Lynn Coady read in Montreal, at Concordia University, at 7pm in the De Seve Theatre, Library Building, 1400 de Maisonneuve West. Follow her and Writers Read on Twitter. Students of Concordia can attend a master class Friday morning. See writersreadconcordia (@) gmail.com

Frankie Barnet is a graduate student at Concordia University and acting Writers Read Assistant. This interview was conducted via email. 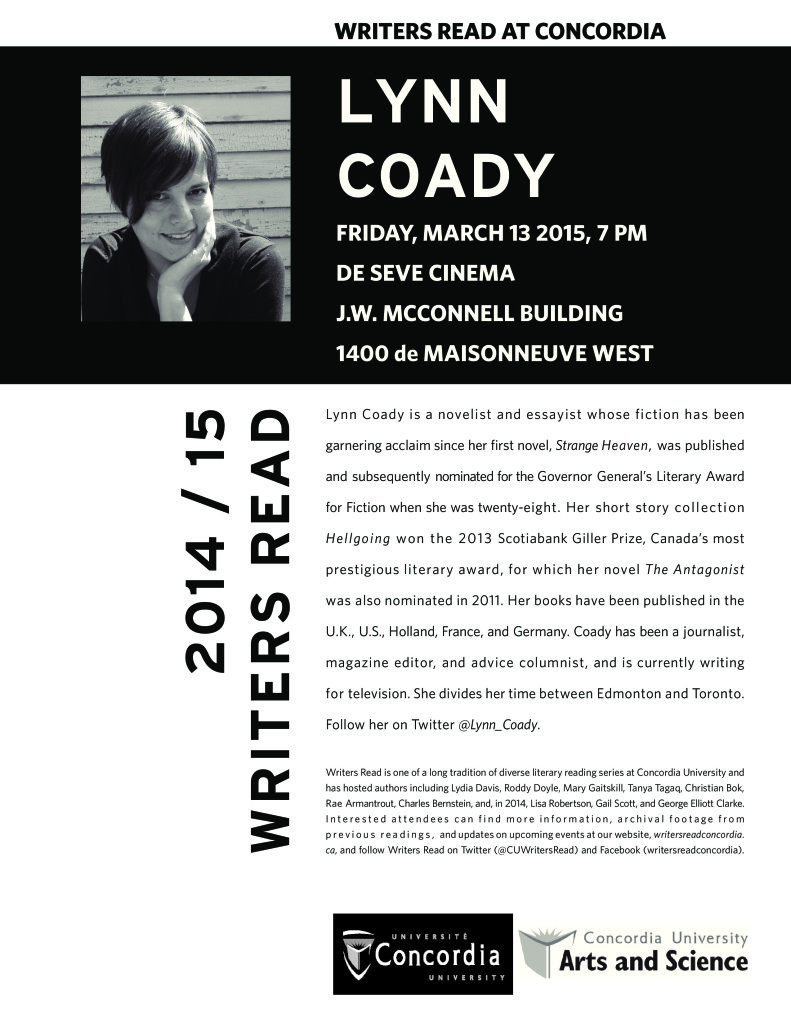