*
I might sing forever with never a goal nor solution

*
while singing of the pleasures of good gianthood

The commonality of all form is constraint and its bending: mine is length and a conceit. This is an ornament, approaching by a leap.

The first trill, or turn, rather, is sound; how Bernadette Mayer’s sonnets sound to me, their melodic or imagined graphic contours, their richness, their affective and harmonic range, intervals and ties.

If a sonnet is a sound and a tune, standing on its own feet, as well as being linked to others, then each one could be said to have a sort of prophetic musical power in that it signals or suggests where it might go next; embracing chances, it is one fragment of something that makes the overall piece memorable or coherently itself.

All sound patterns can bind a moment’s immediacy into a form. I think it is useful to analyse these sonnets as other cycles or series via the playing together of consonant or dissonant arrangements, lengths and rhythms, in which sequential reading can be revisionary and inform the semantic and extra-textual loops and insistences.

As with any sonnet sequence, I want to ask whether Bernadette Mayer’s sonnets need to be read as individual poems or as a cycle. Presented as such, they resemble a compositional and reception problem well-­known from the ‘Klangsprache’ of Schubert and Schuman in their German ‘Lieder’. Schumann’s Eichendorff cycle Liederkreis is composed of stand-­alone pieces but their underlying musical—rhythmic, melodic, harmonic—structure is only legible as a whole. True, the pieces are a ‘romantic whole’, which implies but does not satisfy closure, and Mayer’s sonnets, too, are no ‘cycle’ as such. The last sonnet does not pull towards the first, nor is it a triumphant end-­point prepared by gradual build-up, it is rather an accumulation that is united by textual (syntactic, semantic) and motivic characteristics (open beginnings or endings), or the re-appearance of characters (Grace).

These sonnets are songs that constitute themselves harmonically in a processual revelation, as an everyday epiphanic desiring structure or glimpse of the is and may be. Thoughts doodle and dander, in ritardandos and most of all grace notes—those little embellishments, in small type, clinging but frivolously free, uncounted in rhythm’s measure.

Dante is there in name, Elizabeth Barrett Browning (‘Most gracious singer of high poems!’) in spirit[1]. Sometimes there are word order inversions, in which the deliberately poetic is synthesised, placed on the dinner table, ‘I’m so mad at you I’m sure I’ll take it all back tomorrow / & say then they flee from me who sometimes did me seek’. The sonnet tradition is here present as citation; quoting Wyatt at the lover as a form of rebuff, and as consolation. Or even more explicitly, the sonnets sometimes foreground their sonnetness:

No deliberate show or avoidance of form’s constraint, only a self-­awareness of the poem’s participation in the genre’s evolution. Self-­reflexive moments contour a history of the sonnet form, they showcase a tension, a formal straining, as well as an overflowing, which matches the emotional, physical and mental states they portray or style into a fragmentary whole. The Sonnets traverse and expand generically traditional subjects. For instance, we find the long-­standing anguish that is written into the genre. The Petrarchan sonnet makes garlands of the poet’s masochism, blending love and death as equally tragic—which here appears with a feminist twist: ‘All torn and sore like a female masochist that the rhyme / Of the jewel you pay attention to becomes your baby born’. Motherhood, too, is a political choice:

When Eliot writes in ‘The Music of Poetry’, ‘No verse is free for the man who wants to do a good job’[2]—he claims that absolute compositional freedom can’t produce a good poem, but forgets that this freedom is particularly restricted for a woman who is trying to write, trying to ‘do a good job’. There is a tangible limit on freedom, on movement; the poet and her sonnet cannot go where she pleases, there are domestic, amorous, and financial relations that need fixture.

There are colloquial we’s and you’s and remembered intimacy in an everyday buzz of having a coke with them or you, but here it’s wine instead, and babies need to be fed. Some phrases are without consequence, that is, the consequence is not revealed, and why should it, there’s no stable tonic, but unprepared modulations, polytonal. It’s in this formal way but also in its tone that Mayer’s quotidian sonnets speak to O’Hara’s personal and deceptively anecdotal, casually detailed poems. They are an encyclopaedic or at least telescopic swerve across a person’s life. But there’s less procedural listing; they are less perambulatory, less flamboyant, their movement is thought, and thinking is observed as something to marvel at. Worries about what might seem trivial, what is tremendous, in a constellation of the universe.

These sonnets are responsive, their form adaptive, guided or nudged by a thought, a momentary experience, a sense and sentiment. But it would be a misrepresentation to see them as heavy on the personal, they ask pertinent questions about perception, politics, culture, the poet’s profession, underpayment or no-­payment, socialist thinkers (Fourier), Greek social system and division and community (phratry), and geology (porphyry) and epistemology. They establish poise between extreme introspection and outgoingness with the external world; they suture moments of suspension by way of shortness or pith; for the task is to convey fleetingness but elongate it poetically.

A sonnet’s covenant is anticipation, longing, failure, anguish, disappointment, and pleasure, and these sonnets show themselves to be experts or connoisseurs, rather, in the poses and guises of love-­writing.

I am untrained in writing about intimacy. But the eye and ear—they are; and really what I should have done, was write a score, and sing it. 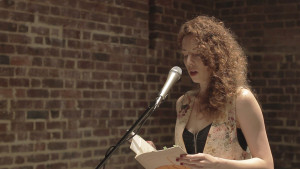 Sophie Seita works with poetry on the page, in performance and in video. She is the author of 12 Steps (2012), Fantasias in Counting (2014) and i mean i dislike that fate that i was made to where (2015), a translation from the German of Uljana Wolf. Her videos have been screened in the US, UK, Ireland and Germany. A recent and on-going collaborative project can be seen here. She lives in New York and is finishing her PhD on avant-garde little magazines.

One Reply to “Sophie Seita on Bernadette Mayer: Sonnets”