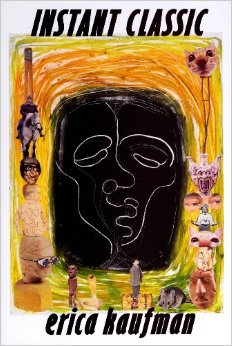 “we can’t all be ballerinas, ducks, or robots / and we can’t all heed the ventriloquist and live / in the apothecary’s store indulging in mercury, tobacco….” (17).

In erica kaufman’s INSTANT CLASSIC the question of ‘why/how poetry?’ crescendos into several lines of inquiry: “Who owns language? Is language a body to liberate?” (12) “What does it matter who is reading?” (11). More metonymy than metaphor, kaufman’s innovative creation of ‘the mutant’ and her self-proclaimed failed attempt at finding a place in “paradise” (also framed as John Milton’s Edenic garden: “There was never a place for me in the garden,” she writes) leads to one of the most pertinent questions of all: “I cannot help but wonder”, she contemplates, “if there is some connection between epic and censorship – between ‘extreme amounts of writing’ and the ‘suppression of speech’” (11). It is with the aforementioned emphasis on re-invention as resistance that I present to you erica kaufman’s very relevant collection of poems, INSTANT CLASSIC.

Before delving into some thoughts on the collection, it might be useful to think about what a classic is, and by extension what an ‘instant classic’ might be? How does it relate to language and to the present time (of composition)? In “T.E. Hulme, The New Barbarism, and Gertrude Stein”, Laura Riding (Jackson) writes:

The word classical carries with it the weight of all works that have ever been called classical. The impressiveness of a “classic” is in the implication that it belongs in the company of other great works and, regardless of its time, really dates from long ago, from the time when the past was so solid that everything was classical…Classicism is what Miss Stein means by distribution and equilibration. (85)

It may seem rather arbitrary to choose Riding’s description of the term, especially when classics can be found just about everywhere; from high art and the classicism of museums, operas or ballets, to the epics of Milton, Dante, or Virgil, to canonical works, and popular musical hits, to the idiom “classic!”, the term is one of many concentric circles rippling out and touching diverse aspects of art and culture, past and present. As kaufman writes in her introduction, “Instead of an Argument”,

What I find particularly helpful in both Riding’s and kaufman’s account, is the manner in which the term ‘classic’ comes to stand in for the institutionalization of art, as in ‘classicism’, and the subsequent absorptive nature of the artefact in relation to time, history, and of course institutions. But at what cost? In the first poem we find “eve / in the garden voiceless” (15), and in the poem that follows we return to the “predominantly stoic but necessary” image of Blake’s tiger, “like being in cahoots / with the experience of power and amputation” (16) – the obvious analogy here being, not with the tension between innocence and experience per se, but with the inscription and effacement of the subject in relation to history. Rather than build an allegorical argument about oppression that would be mirrored in the patrilineal authority of Paradise Lost, its dramatization of warfare, military industrialism and the exploration and colonization of a new world, INSTANT CLASSIC stages its mode of address in the political epic of the mutant:

In a manner that parallels Donna Haraway’s ‘cybernetics’ (see “Cyborg Manifesto”), kaufman situates the classic not in some nostalgic past but as the very terrain that defines present moment politics. It is not surprising, then, to find in the final section’s epigraph a most appropriate quote by Stein: “Let me recite what history teaches. History teaches” (np). If the classic, in kaufman’s hands, teaches anything it is its (ideologically fraught) claims to an ideal past, an ideal world and the fantasy of fixity – the monument without its ruin.

Poised as the problem of how to claim responsibility over the economic and totalizing (read: tantalizing) lure of the classic (read: corporate privatization) that shrinks public space by laying claim over the autonomy of the subject (read: advertisement), it is precisely in their ‘mutantness’ that kaufman’s collection resists the eloquence (read: essentializing) and naturalizing discourse of “the classic”; the following example, especially in regards to embodiement, renders that tension quite palpable:

i want to get used
to how the elite live or mark
impoverishment as luxury like
coffee, soda, and other elements
of delivery genetic or hi there,
make sure you          put your body / in the right space (29)

But the classic is not entirely ‘bad’. And, in fact, one of the complexities of kaufman’s collection is that it exposes the inherent contradictions and tensions within the classic itself as both an abstract and normalizing term, but also as a potentially revolutionary tool. This is why the poeisis of the classic carries so much relevance. It is simultaneously in a state of construction and disarmament, which kaufman literalizes quite successfully through the repetition of “instant classic” as the title for each new poem. Similarly, the mutant too is not without its own contradictions, reproaches and complicities. In other words, the mutant does not pretend that it is not also part of the problem, part of the machine, part of the blasphemy, and part of the revolution. And I suppose that much of the interest in the instant classic, as category, reposes on the ability to transform it into an idiom of protest, to mutanized it. To address

the problem of how
to read billboards, lawyers,
diction as experience

of embracing the leeches.
i don’t control my own
metaphors, humanized

amputation a straw taken
to the puss of the road (9)

Near the end of the collection kaufman writes, “today feel a strange thing / the want to reappropriate / a story allow myself to stay” (79). The key word here being “reappropriate”, which with the appended ‘re’ suggests a double movement that is akin to the doubling and generative move of ‘reframing’ or ‘rewriting’. Of course, the movement is doubled in a self-reflexive manner also, especially if we return to a much earlier passage where kaufman asserts that there was never a place for her in ‘the’ garden, and while the fruits of the collection attest to this, what kaufman has perhaps found is rather ‘a’ garden among gardens. And the classic? The (paradoxical) necessity for re-invention.

I thank Gail Scott for being this essay’s first reader and for her generous attention and suggestions. 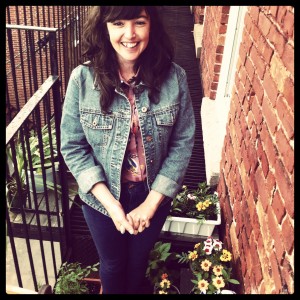 Geneviève Robichaud works in various essay forms and is an editor for Lemon Hound.