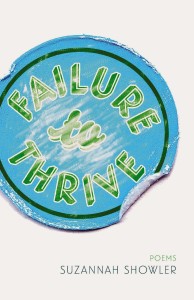 There is a common thread running through these poems – fundamentally, the wry, desolate voice – but Showler’s dark debut collection reveals a range of talents. Her confidence and vision are equally felt in the mapping of a cerebral artifact, such as “A Short History of the Visible”, as in her synthesis of sample-based forms, from playful, unadorned found poems to the sprawling “Already Today You Have Had Several Very Good Ideas”. Her daring, strange metaphors, crackling wit, and music all make for verse that consistently yields on first reading, even as it invites you to look again.

At times, these poems move with a lurching, mechanical force like “the ugly joisting of a jaw” (7); Showler’s mastery over line and break is at its peak as she dovetails several leaping metaphors into one sentence, each drawing you forward, grasping, to their root. It is the sensation of feeling your way down a staircase in the dark, but this drawn tension is neatly countered by a sense of sound and rhythm that manifest in brash, punchy textures.

In spite of Showler’s penchant for the dizzying and sinister, the architecture of her poems is founded upon this same poise and balance. As she writes, “making things fit together isn’t the hard part” (28); instead, it’s creating this vague sense of thesis, the cohesion of the poem, hulking in the periphery, “hovering just outside the vision” (37). The omission of core – and the paradoxical sense of its magnitude – figures most prominently into her experimental pieces. However, prevailing cohesion is essential to root the categorical, thunderous statements and disjointed movement characteristic of many branches of contemporary and experimental poetry. While many young poets seem incapable of keeping a sense of vision and focus in such poems, Showler’s abstractions and digressions feel purposeful and loosely eloquent.

In Showler’s imagination, “you’re in space. From there, a man can fall the length of a protracted guitar solo and wind up in the desert” (21). These cynical poems knit together one barren landscape after another, yet this vision is consistently rendered in luminous detail. Though she posits that “you’ve never seen something so thoroughly as to forget its name” (5), she creates the sort of poignant clarity wherein truth is felt, not known. This is the alchemy of good poetry, and the chief irony of her work: in the act of depicting the common, mediocre, and ugly, it is transmuted.

It is natural, at first, to feel suspicion toward a bold, self-assured voice, but Showler proves she has more than earned it. This is the real thing. Her poems, “shining like a corrosive, lovely weed” (46), pull you immediately into her intricate, barbed imagination. Where she leads, I am willing to follow.

Think of the death portraits as still frames
from a reverse-motion video of each demise:
lamps coming upright like break-dancers
fighting gravity with core strength; fire-bits
leaping back into sockets to become unborn flame;
glass archipelagos sucked into Pangea.

The small one was vulnerable, its cord lounging
like an Achilles spine. Its base was banged to a kilter
and three bulbs replaced before it was done for good.

Here’s the reedy green one – it dragged
too much electricity from the wall,
flamed out from the effort.
It was too good for this world.

The tallest and strongest when down inexplicably,
all alone. We suspect it made a sound
like the prehistoric hybrid that evolved into the horse.
The thick glass dome left a galaxy on the floor.

To take the last image, lard the fallen with flowers
and serve them up, tableaued among their loved ones:
the industrial-thick bookshelf,
the ladder leaning into it that won’t bear weight,
the grey couch that can coax a nap out of anyone.
You may need to use props, pin parts together,
create an illusion of life.

(How many lamps had I already broken
the night you threw me over your shoulder?
The way the ground abandoned me felt reckless.
I told you how much I weighed,
offering evidence of something. Your hand
on my calf calibrated the unexpected balance
we’d become, pulling me towards earth.)

Remember the lamps when they were at their finest,
revealing whole rooms, clearing away shadows
accumulated in corners as though bred from spores,
a dark that catches the periphery, stretches
into masses hovering just outside the vision,
always on the verge of approaching.
Remember that the lamplight held these back. 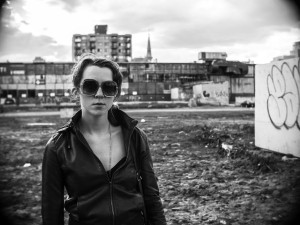 Hannah Hackney has work published in such venues as KIN, Raintown Review, and Shotglass Journal. She is the co-creator of Dyad Press, which publishes small handmade books of art, poetry, and photography. In addition to her work as a journalist & technical writer, Hannah is currently pursuing a double major in Honors English & Creative Writing and Biochemistry. She lives in Montreal.