One last romp before the man strapped on his sandals
and dragged his sword into a bloody field. And some quiet,

unbuttoning all those pearl buttons from nape
to feet, folding calf-length velvet breeches before slipping

Some kinky stuff went down, for sure, maybe involving butter churns.
I don’t know. Mammoth tusks? Some people are super brave and creative.

as were cute overbites and obedience and hunger
and wide birthing hips and relentless seasick nights.

Some of it happened inside a marriage and some outside
and some between enemies in a burning village.

Maybe not all of it was consensual. Let’s be honest, history is cruel.
Some women limped out of it, tried to ignore the shame

swelling their bellies. Some women resigned themselves,
just waited for it to end, floating above their bodies.

Back then it couldn’t be as clean and deliberate. No thawed vials
of specimen, no donor profiles, no eggs suspended in gel.

Just so many bodies crashing into each other, standing, sitting,
on knees, on beds, with oak bark gnarls pressing

into sweaty backs, with straw in hair, with sand grinding
against hands, with goose down pillowing heads,

the smell of whale oil and opium, of elk velvet, of roast hare,
of piss and mead and beeswax, of coal smoke and manure,

so much skin and so many promises, such love and pain
and contempt and doubt, such hope and duty, all that fucking

Catriona Wright is a writer, editor, and teacher. Her poems have appeared in Prism International, Prairie Fire, Rusty Toque, Lemon Hound, The Best Canadian Poetry 2015, and elsewhere. She has been a finalist for The Walrus‘s Poetry Prize, Arc‘s Poem of the Year Contest, and a National Magazine Award. In 2014, she won Matrix Magazine‘s LitPop Award. She is the poetry editor for The Puritan and a co-founder of Desert Pets Press, a chapbook press. Her debut collection, Table Manners, is out with Véhicule Press. 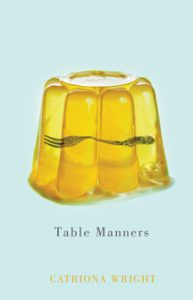