I buy a game for the computer in the family room. The game is a simulation game, I buy it full-price at a game store, not for 50% off from the discount bins at Walmart like I usually do.

The game I buy is called Tropico. In it you are the jefe of a tropical island, and the tropical island is Cuba, though of course the game doesn’t say that. I learn to play the theme song on the accordion. I always play it for you when you come over and mami tells you how nice it is they make video games for little socialistas como tú y yo. What nice bass notes on this song, I love this song, ah yes I know it really well, you say, but I think you’re so full of it. I tell mami this song only exists for this game so there’s no way you’ve ever heard it before. You say it’s nice I’m finally doing something interesting with the bass notes, you ask why I never sing the words, you can’t believe there are no words. I can’t stop rolling my eyes behind your back, mami is in a good mood because now it is a secret joke between just me and her, your incompetence.

I like to describe to you what the game is like; yes, well in the game you start looking at the back of the truck, the cargo of it. You are taken down the anonymous streets of this tropical paradise and everyone is talking and living their lives, they even show gringo tourists. But once you are in your palacio you go very far away and you never see anything up close again, not even an animal. The whole point is you can lead however you want to lead, and so of course I am a socialist or a communist or whichever it is.

But I do not tell you the rest. At the mines there is a revolt and I make a detention centre. Though perhaps nothing happens and I make a detention centre. It does not look like a detention centre like the ones I know, it looks like a school with a large gymnasium. But I get scared, I cannot send the miners to the detention centre. I go back to my old simulation games. In one I build up little cubes of water and place people who are misbehaving in them until they’re all the way under and gone. They’re so small, sometimes I let them live and they pay to come back and ride the rollercoasters, who knows why. Sometimes mami hovers above me laughing smacking me gently on the back of my head saying little things like, que malita es mi hija or mi hija es asesina! When I go back to being jefe she asks me how I am doing and I zoom out and I tell her yes I am being very good and very fair though it’s hard. But I am awake very late at night killing little dissidents in my camps making the newspapers say things that are not true, putting little posters of little missing people in community squares telling their families I am so very sorry for their unfortunate losses when I talk to them from my palacio.

There is a fire in our building because our neighbour was stoned and left all her candles on overnight. The fire spreads into the attic space we all share and mami comes into my bedroom where I am sleeping so peacefully. I tell her to leave me alone and she screams and screams. I end up rubbing my eyes, walking down the stairs, and I see her on the phone. She’s coughing even though there’s no smoke. She’s taking in these long, wild, empty breaths all alone on the phone, shaking and talking in Spanish to the firefighters. Outside they have to sit her down and tell her, miss, there is no longer any fire, there is no longer any fire and it’s all okay now, there’s not even any damage, but she says there is still a fire and she looks me in my eyes and I believe there is still a fire.

I wake up one Sunday and it smells like hot yeast so she must be making bread. I come into the kitchen and she is crying so I think she must be chopping onions for some reason, maybe for empanadas. But when I get closer I see she is not chopping onions. I don’t say anything and over my silence she says today Pinochet died. I don’t say anything so she says, did you know he’s 91? I say no and I say, you must be so happy he’s gone. I take a piece of hot bread from a basket and rest butter on it to watch it melt. She stands over the sink and says, I wanted to smash his hands to pieces and make him play the guitar, then hang him by his feet and spit in his nose. I’ll never in my life get to see him die. And she looks at me, she is so big and close. 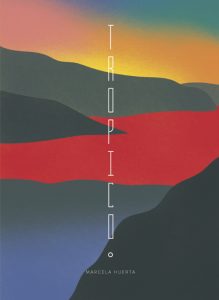 Marcela Huerta is the author of Tropico, a collection of poetry and creative nonfiction forthcoming from Metatron Press in 2017. She has worked at the Museum of Anthropology, Working Format, and Free Agency Creative as a Graphic Designer, and at Drawn & Quarterly as an Assistant Editor. She is the proud daughter of Chilean refugees, and her work centres around their stories, as well as the stories of other marginalized voices. You can find her online @marsmella. Preorder Tropico from Metatron Press here.