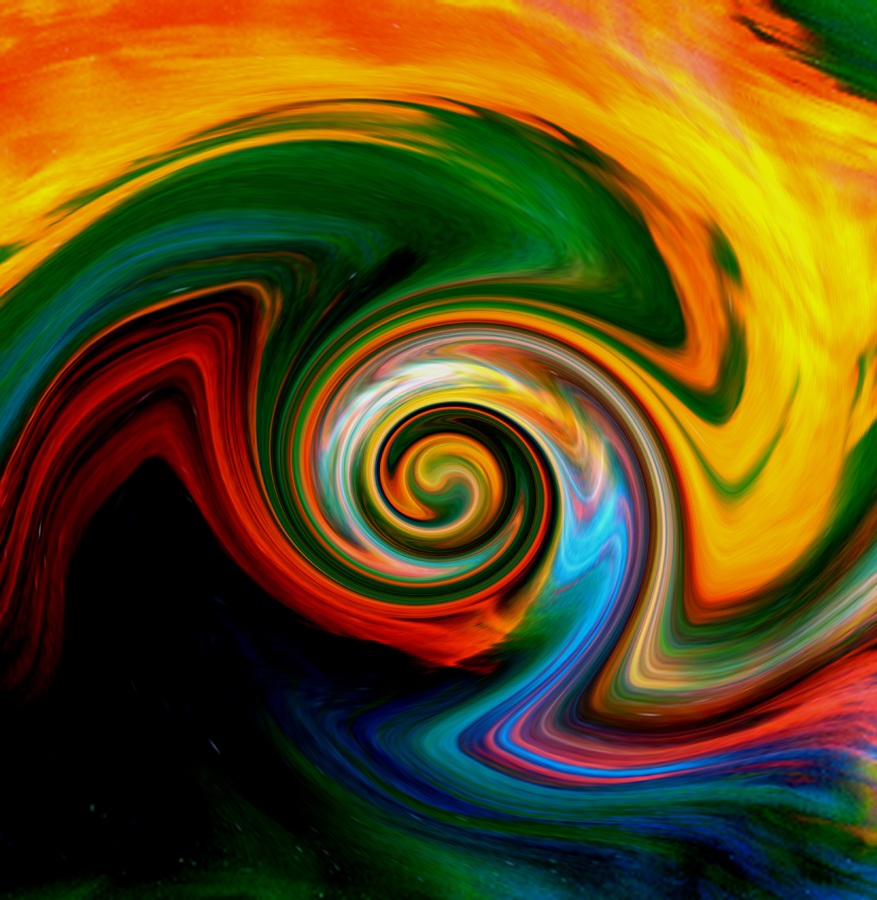 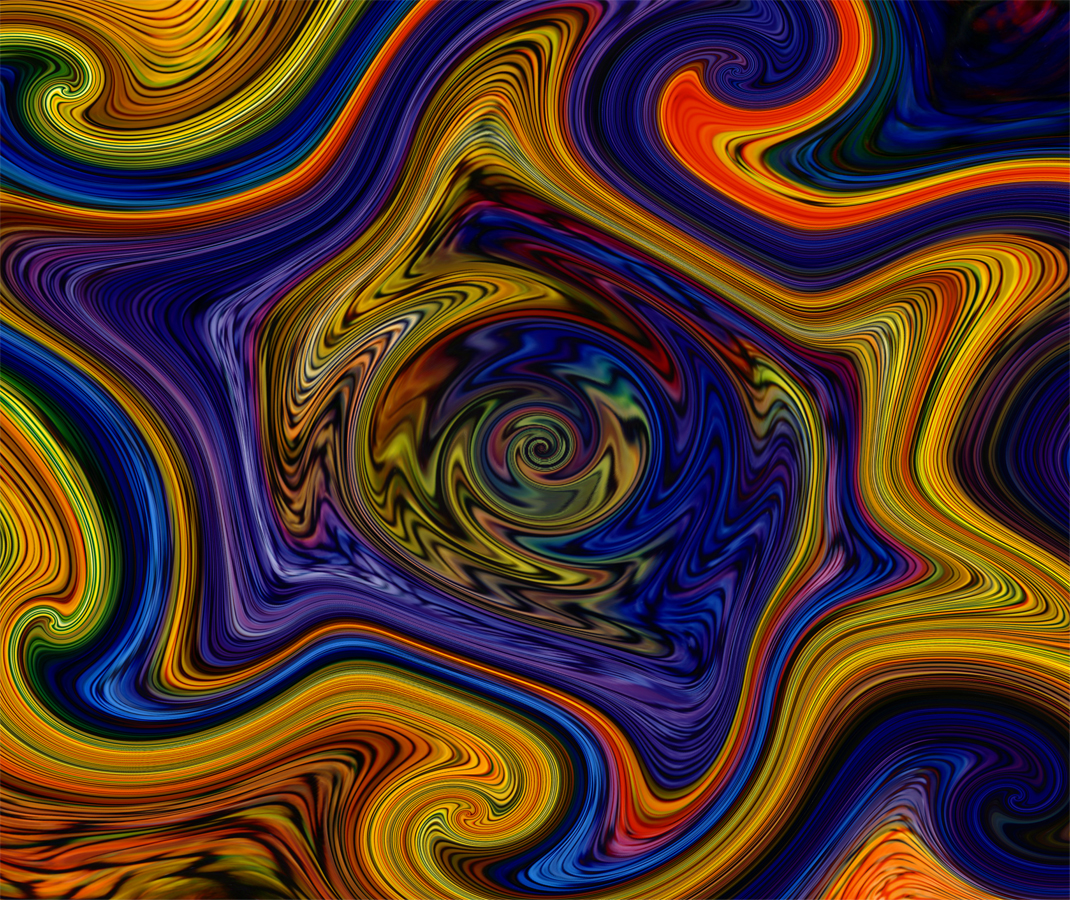 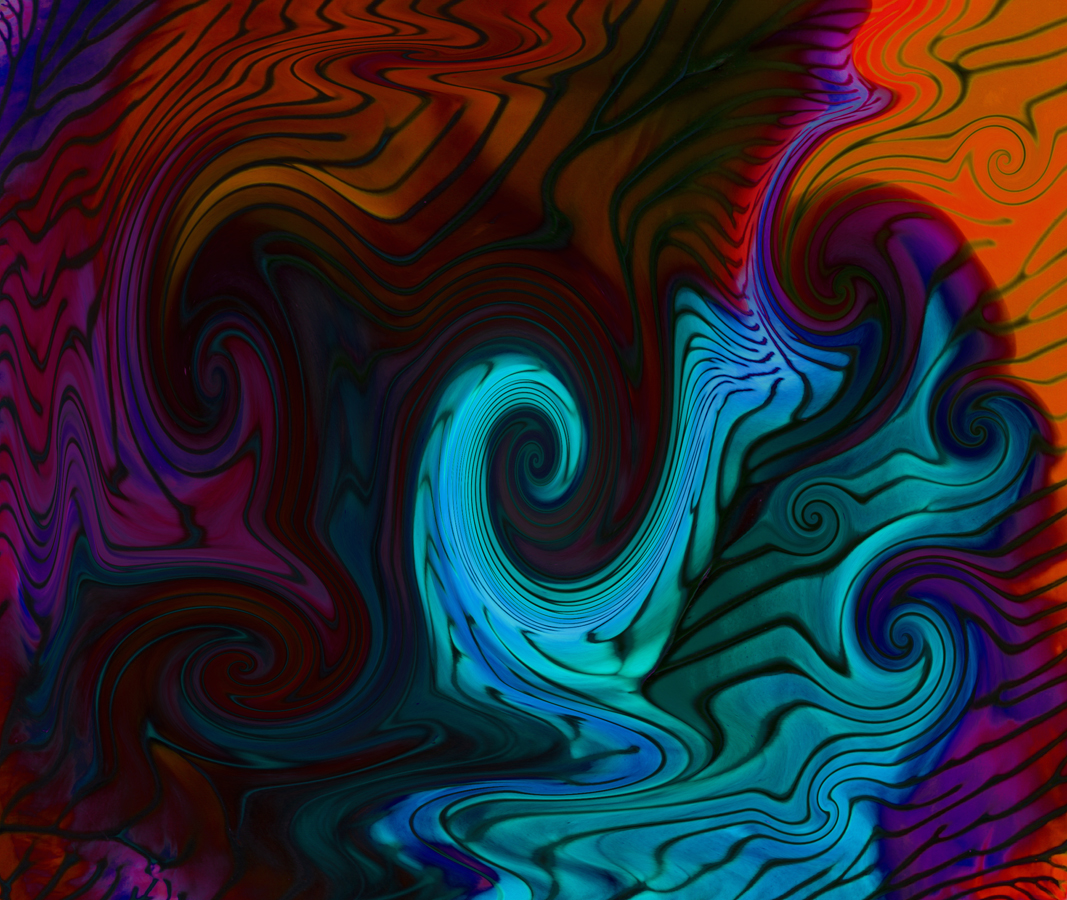 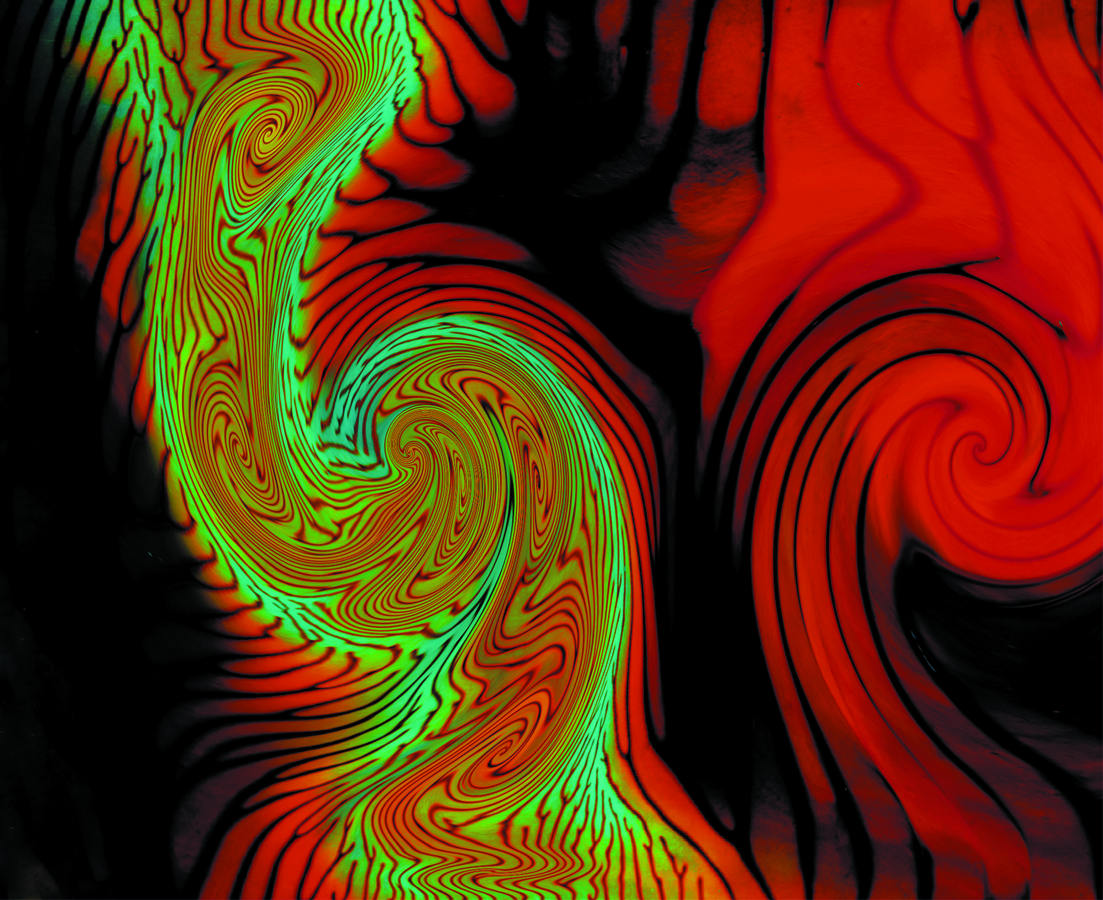 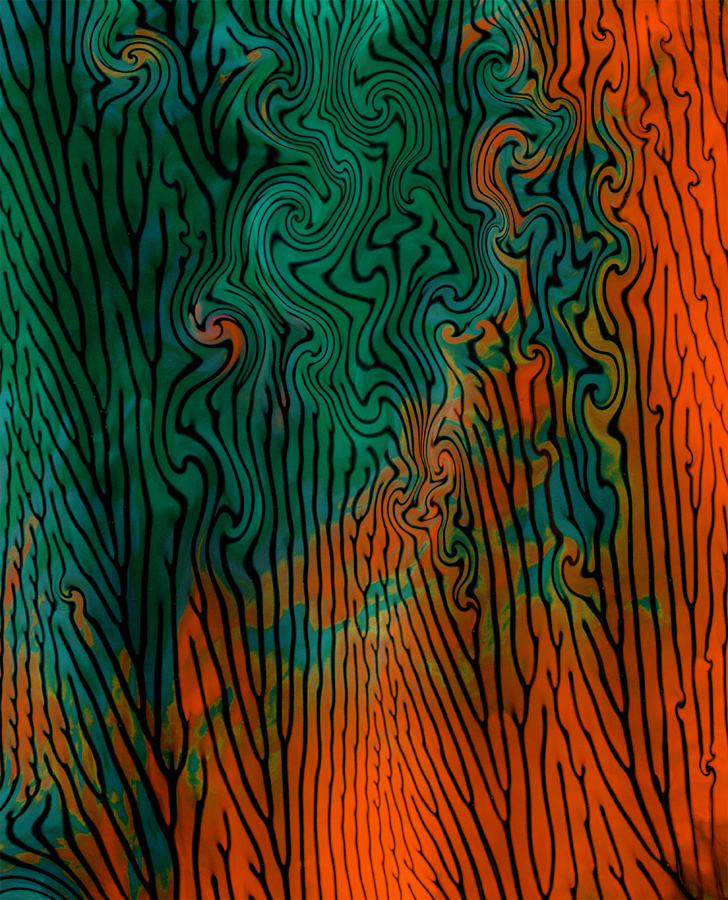 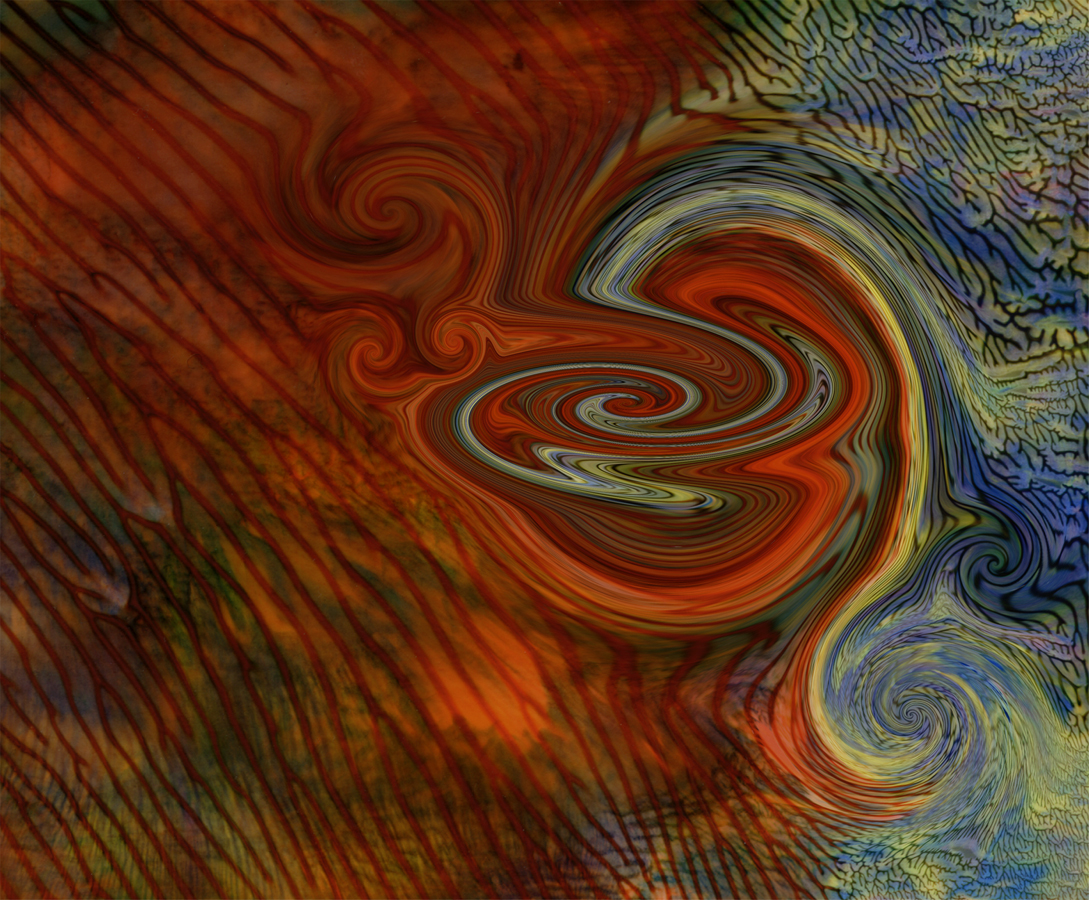 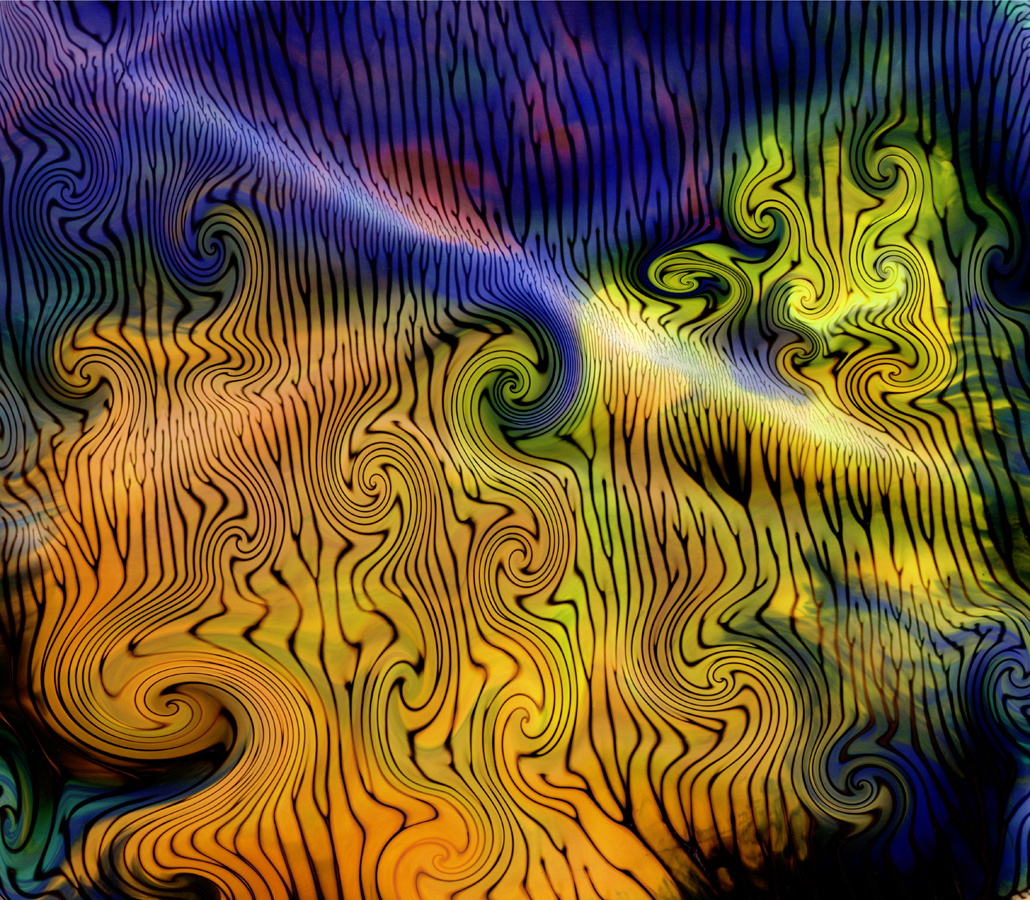 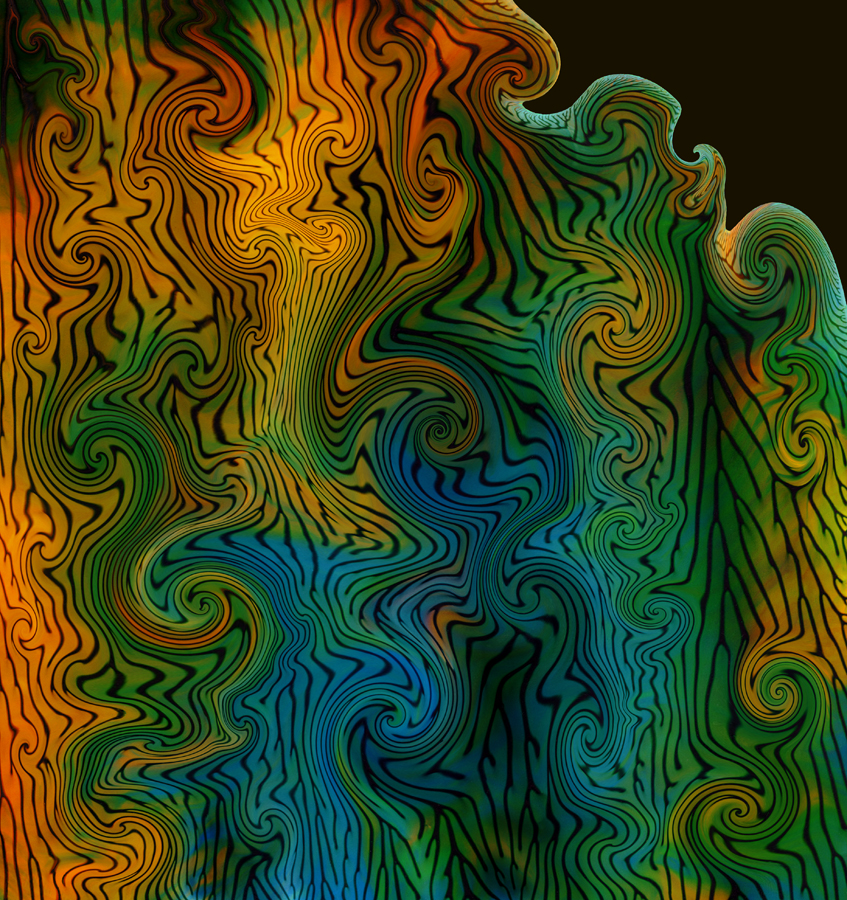 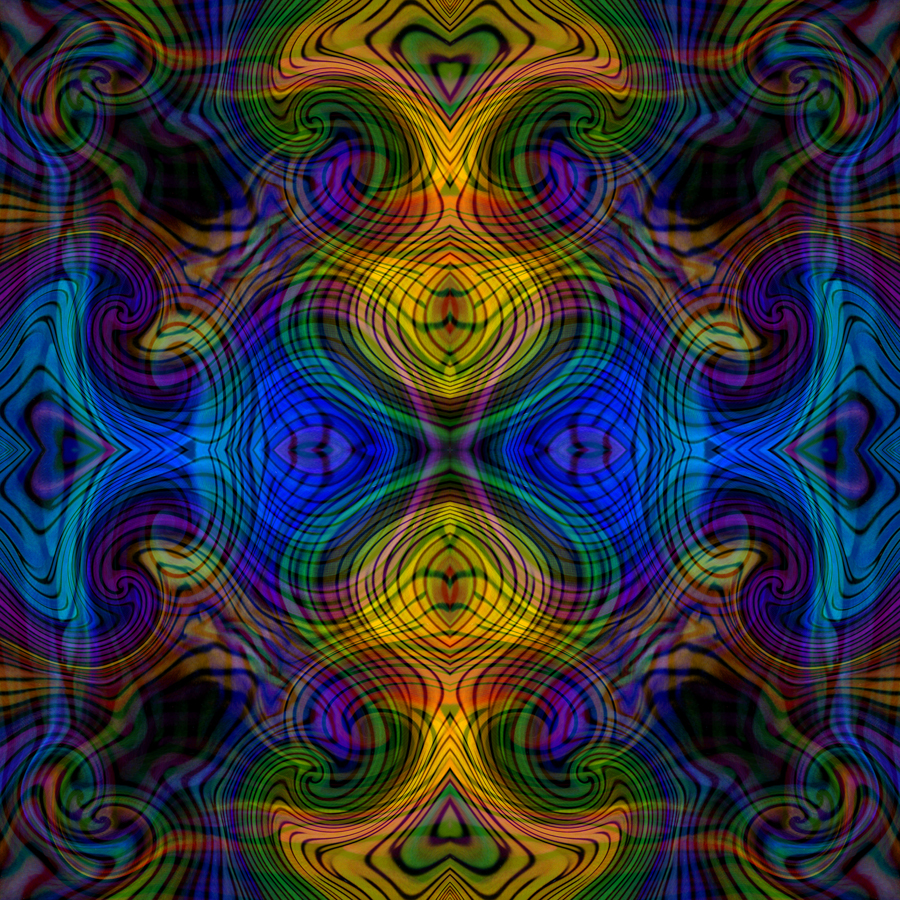 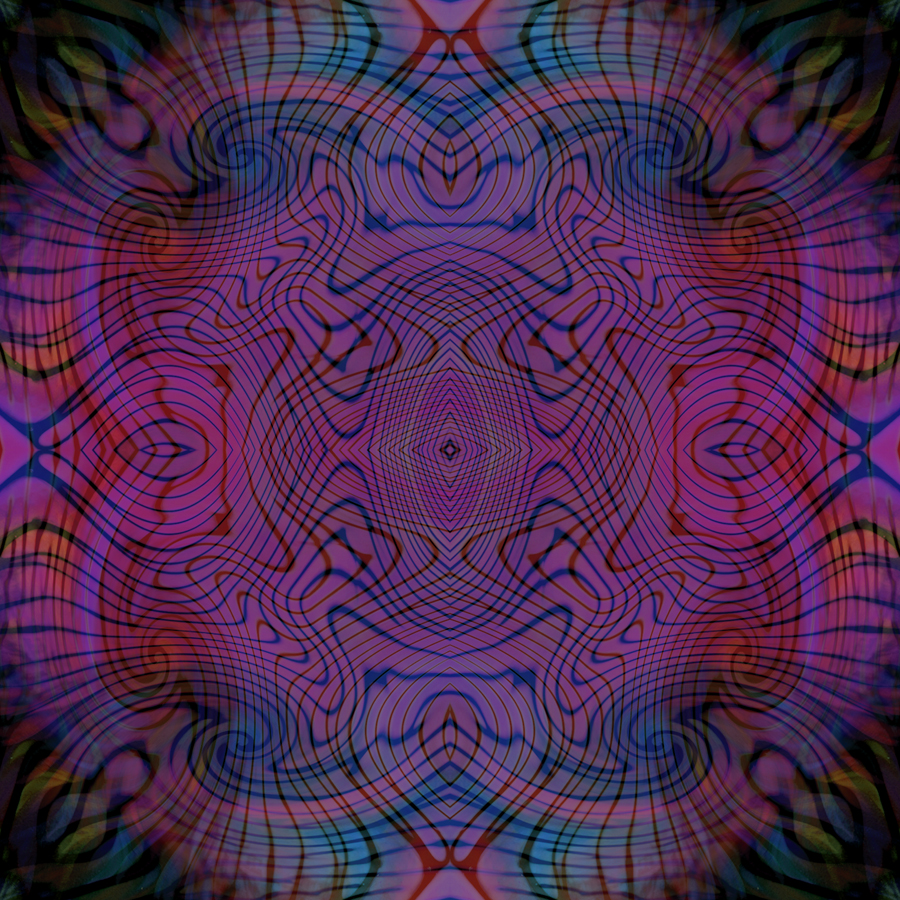 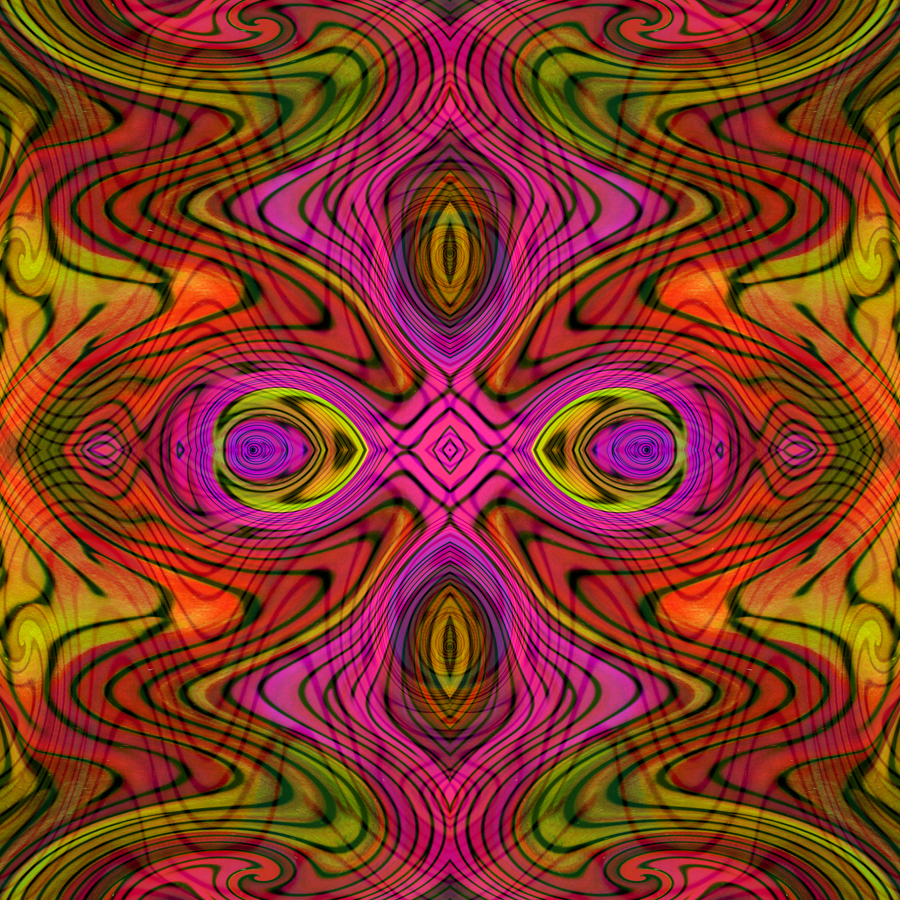 I believe in domains of exis­tence vivid and com­pelling beyond even this mirac­u­lous real­ity we call the world.[i]

Canadian poet, pataphysician, and psychonaut Steve Venright has been experimenting with decalcomania since 1989. His paintings look like drunken mandalas or cyclones that spin around the south pole of Jupiter—dizzying twists, turns, and tumbles of fluorescents in concentric and eccentric spirals. Like his poetry and performance art, Venright’s visual art is a formal and political investigation into the possibility of altered states and other worlds. “I don’t know what it is I’m attempting to reveal exactly,” explains Venright, “but there’s a sense that it is there, that the Other exists, and so I won’t rest until I shine some light on it.”[ii] He is a cartographer of the unknowable and unnamable, or what Timothy Morton calls “dark ecology.”[iii]

Decalcomania is the chance-based composition process first popularized by Spanish Surrealist Óscar Domínguez in 1935.[iv] By 1936, everyone was doing it: issue number eight of the Paris-based magazine Minotaure, for example, includes reproductions of decalcomanic works by Domínguez as well as André and Jacqueline Breton, Georges Hugnet, Marcel Jean, and Yves Tanguey.[v] Benjamin Péret’s essay on decalcomania, “Entre chien et loup” [“Between dog and wolf”], is published in that same issue.

Dominguez’s process involved diluting black gouache with water and splotching the paint, at random, onto a chosen surface (e.g., paper, canvas, or glass) before pressing another surface against it. Then, he would slowly peel back the second surface with the paint still wet. As Pepe Karmel notes, “The combination of pressure and suction … pushes and pulls the colors into strange, visceral ridges, like those on the surface of a sponge.”[vi] Differences in pressure, movement, speed, and gouache viscosity generate formal variation.

In 1949, British Surrealist Ithell Colquhoun—diviner of “the stain”—remarked that decalcomania “tends toward landscapes, with foliage, marine morphology, feathers, and reptilian scales.”[vii] Likewise, Breton said that the process opens a window to “the most beautiful landscapes in this world or any other world”:

The forest that suddenly becomes denser as it leads us back to the times of Genviève de Brabant, Charles VI and Gilles de Raise, then just as suddenly proffers us its clearings carpeted with giant carlinae, a certain sublime peak in the mountain-range, naked shoulders, froth, icicles, the grottoes’ delicious hamlets, the black lakes, the heath’s will-o’-the-wisp, everything envisaged by Maeterlinck’s and Jarry’s first poems, the swirling heaps of sand, the head held eternally between the hands, the rocks whether caressed by dynamite or not, the submarine flora and abyssal fauna that provide splendid parodies of human efforts at representation and comprehension …[viii]

Where in the bottom of slumber an immobile oncome of elementals formed of a submarine snow, and some aflicker, like drowned diamonds blew out their rudimentary bellies—almost protruded foetal arms over all an aimless baton of inaudible orchestra—a colorless water-plan growing the stumpy battlements of a castle in a game of chess waved in and out of perceptibility its vaguely phallic reminder.[ix]

Cellular and celestial, nano- and giga-, Venright’s imaginary landscapes share far more in common with Jules Verne’s Journey to the Center of the Earth and Sun Ra’s Space is the Place than the mechanically-reproduced brush strokes of Romantic ideology used to represent Canada’s landscape on stamps or in schools. His divinations theorize Canada as a science fiction— alien, astral, occult, and utopic.

Venright names his decalcomanic practice “variegraphy.” First, he begins with “glossy” paper and a “blob” of “luminous” paint.[x] Venright’s decision to use fluorescent colors means that Domínguez’s decalcomania is infused with a decidedly psychedelic aesthetic— San Francisco by way of Tenerife. Second, Venright applies the second sheet of glossy paper on top of the first, “smearing, squishing, and pulling” the paint, as he so desires.[xi] Next, he separates the pages and scans the result—either the complete image or an especially compelling detail. Finally, he opens the scanned image in Photoshop, manipulating it through the use of the “swirl” filter.[xii] Venright notes that, at this point in the process, “hues and saturation and other qualities can be altered, too.”[xiii] Thus, Venright takes Domínguez’s visual automatism on a trip through the digital pharmakon.

Venright’s variegraphs are, for the most part, divided into multiples series: Neuralchemy, Pyrofolia, Topomorph, Turbulation, and Spiral Agitator. The series names are based on recurrent visual themes, as intuited by the artist. Some variegraphs remain untitled. Venright creates sequentially numbered entries for every variegraph he produces and within each particular series. Not all attempts are successful. Failures are discarded. Venright’s decalcomania is also the source of his punningly-named “tryptiles.” He selects a detail from one of the variegraphs and creates a fractal series of symmetrical, “infinite replications” of that detail.[xiv] As he explains in an interview with MONDO Magazine, “They reminded me of certain visions I’d had after ingesting tryptamine psychedelics.”[xv]

Venright has exhibited his art in group and solo shows around Toronto since the early 1990s. His variegraphy has also been featured on the covers of his literary publications. For example, Variegraph #88 (Spiral Agitator 1) is on the cover of Spiral Agitator, a collection of poems published by Toronto’s Coach House Press in 1999. The book is, in part, a psychedelic response to the “common sense revolution” of Mike Harris’s conservative Ontario government of the 1990s.

The following digital gallery provides a representative selection of Venright’s variegraphs as well as his “tryptile” experiments. It is intended as a visual supplement to The Least You Can Do Is Be Magnificent: Selected and New Writings (Vancouver: Anvil Press, 2017).

ALEX PORCO is an Assistant Professor of English at the University of North Carolina, Wilmington. He specializes in twentieth-century poetry and poetics. He received his Ph.D. from the State University of New York at Buffalo.