grammar and rhythm are

here. We make em over

all the way to sing.
“acquisition”

Fred Moten isn’t after the basic inter-textual hustle. “Experimentally blackness dwells” he says, and over several decades of black radical scholarship and poetry, his exploration of that dwelling has always presented it as an already many-voiced and collaborative experiment—a depiction the titles of his collections have consistently foregrounded.

Hughson’s Tavern, for instance, refers to an 18th-century New York tavern frequented by free and enslaved blacks and poor whites, and B Jenkins is Moten’s often-credited teacher, his mother. The Feel Trio, the first book in the trilogy that ends with The Service Porch, refers to a live album by a jazz trio of the same name lead by Cecil Taylor and featuring William Parker and Tony Oxley. On the other hand, The Little Edges, the trilogy’s second book, refers to the crispy, tempura-like lattice work of Moten’s Arkansas grandmother’s hot water cornbread. These titles celebrate a black social life that has emerged from the experiment. The series of passages, music, people and conversations that have touched Moten along the way to what he’s trying to say, and subordinate what he’s got to say. A subordination we’re meant to hear and engage.

In The Service Porch, he calls it “the work of being true to the social life / in somebody else 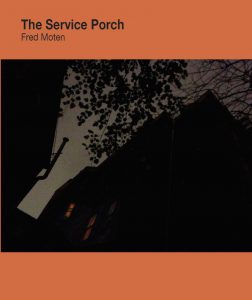 ’s sound and grammar, its placement in my head, my / placement in the collective head as it moves on down the line.” True to the book’s title, that work is sometimes loud—built out of the reach of voices playing off each other, interceding and reacting, as in an ensemble. It’s a music that emerges as a function of an overactive overhearing, with Moten’s own voice deep in its tangle. It’s a result that feels big, and opens toward a different kind of lyric.

In “Anarkansas,” the first of the book’s three sections, Moten’s polyphony is at its wildest amidst the motion and play of public transit. “The 40, and sometimes […] the 15,” he writes later in the book, “is where I started studying how to live in poetry,” and the life of that study comes alive in “Anarkansas.” In the section’s “transit piano” sequence, we get in on the informal, conversational collective (and collecting) that has a way of springing up on buses, where a slop of comingling voices—an “itinerant ensemble,” as he puts it—is sopped up by the poet into raucous arrangements. The approach can be disorienting at first, but there’s intended fun in what that disorientation forces into the open. “Here my partner joe go // he different,” Moten writes in “80.” “He don’t mean nobody no harm // to do this run with me: // here my stickawood my // baseball bat.” Okay, but where does this bus go? “14th? This bus go to san leandro bart?” asks Joe (one assumes), confused. The exchange proceeds accordingly:

now joe you been riding this bus

long as I been drivin

you right that’s right you this let me do

thank you thank you very much

I may still not be sure who’s talking when, but I hear warm, friendly, transient connection fluttering between these tangled voices very clearly. Much of the book feels like it’s been composed in a series of fugitive moves to disrupt the potential stasis and loneliness of authorship—of the singular and of office hours—in favour of this kind of connection and voicing. If nothing else, even when thrust off balance, the reader can engage with the music of speakers engrossed in the blur and bounce of a back-and-forth, as opposed to an authorial address into a void. Here the tradition of that void is subverted at every turn by the enactment of the “social life” Moten describes. While the resulting poems present with a marked opacity, they are ultimately invitations to join in this life—some leading sounds to follow into an open conversation.

Such leads are especially clear in “All School Crit,” the book’s middle section. A series of named prose riffs on the art-school crit setting interspersed with sparse, first-person-plural glosses of verse, the section gets literal about what actively collaborative grammars and social architectures can look like and work toward. Consider “Anton,” a short piece from the sequence:

Anton, irrigation and its discontents are readymade earthwork till afro-

buddhism cleans the mechanism. Then we can sing the riot, g like g

This is how “the nasty’s unlocked,” as Moten puts it. Here the social life in question invokes the spirit of Gwendolyn Brooks as a djeli, the riot g, that is, a griot—a West African storyteller that perpetuates the oral tradition and history of a village or family. And somehow it’s there with “afro-Buddhism,” as the speaker or speakers try to improvise the right mash of terms to pin down a hard thing to pin down. The language extemporized in “Anton” enacts the work where “difficulty and pleasure meet,” as Moten describes later in the book, “in their essence, as practice.” Accordingly, the piece’s words plough through their own inadequacies, as they do throughout the “All School Crit” sequence, in a collective experiment toward a new precision, however elusive.

In fact, for Moten, the point of the experiment is the elusiveness of what it’s working to figure out. The means by which we establish, as Moten writes in “sposin’ al-mashà: a mashup,” “a strain and striation of questioning.” In “it’s not what I have to say,” from the final section of The Service Porch, “cœnoboogie,” Moten comes around to pinpointing a set of crucial concerns he’s been working to sound out all along. “Maybe poetry / is what happens on the bus,” Moten writes, “between wanting and having. I used to think it / was what happened between Oakland and Berkeley.” There’s an expansiveness in that equivalency—an interstice between have-not and have worth lingering in one stop at a time. He goes on: “Now, even in the absence of my office, I still want to move and so I have / to move but never get there in this whole extended region of not being / there.” Not “being there” as in, in the office, on the bus, in poetry? Or, as he writes earlier in the poem: “it’s just that everything I want to say eludes me.” Something he can’t quite get a hold of. Something he began to find in the “slow symposium” of the bus. “But if I caught it I wouldn’t want it,” he continues, “and you wouldn’t want it either.” The poetry he does want to live in is the work that “starts to look like what we do when we come together to enjoy ourselves” —which is to say he’s interested in doing this together.

“It’s not what I have to say” and its insights open up the rest of The Service Porch. Suddenly, the poem’s concerns ring out with an opportunity to participate in every poem, even in parts that first seemed most disorienting and inaccessible. For instance, once I’m urged to dig into “uc santa barbara and crenshaw follies,” it starts to sound like the ensemble behind the free jazz recording it’s named after. What I heard first from the poem’s speaker, the “contraband,” was a kind of fed-up-ness, but what I hear upon returning is the speaker working out the ways the feeling is much bigger than personal:

doing ever again, just this continual interrupt and taper, these precise

broke measurements and displaced tones from all the uptowns you never

been to but read about and have some cousins in, lake providence.

The poem’s “I” transitions to “you,” later to “we.” The speaker’s exasperation gives way to the collective concerns of institutional criteria, levying the one voice’s expansion into a plurality. Now, as a reader, I feel urged to respond, in multiple spots, by digging. “Contraband” is what they called runaway slaves who made it to Union land during the American Civil War. Lake Providence is a Union-established town in Louisiana where a whole lot of “contraband” were made to work, yet again, for free. Meanwhile, modern-day Lake Providence—rich and white on the north side of the lake, poor and black on the south—has a level of income inequality “greater than any other county or parish in America,” according to a CNN profile. UC Santa Barbara’s campus, on the other hand, features an em-shaped pond a stone’s throw from the Pacific Ocean. Modernity’s ongoing big house. And the place the term “black radical tradition” was coined.

What Moten asks of us, if we accept his invitation to dig up this information, is to consider how an impasse can force something further open, like a porch. Or a moving one, a bus. Something not as constraining as an office, or this one-person ink-and-paper thing. You follow him into The Service Porch and you find an all-in investment in figuring out a collective alternative to the ongoing, one deep in the social life practices Moten airs out. “Too bloom in linen pins / too trio for three […]” he writes in “cecil’s culture.” “In very large arrears / in serial / in a flock of flocks.” That’s Fred Moten’s sound and grammar, in my head in your head in ours, working toward an open so big it can be felt. Somewhere that feels radically communal, always “n’em,” never lonely or owned. He tries to move us closer to such an open in these poems by insisting we work with him on the opening. And I think it’s working out—I can feel it.

David Bradford is a poet, an MFA candidate at The University of Guelph, and a poetry editor at Knife|Fork|Book. You can follow him on Twitter and read a poem of his here. You can read a poem from Fred Moten’s The Little Edges, here.