Too Much and Not the Mood, Durga Chew-Bose, HarperCollins Canada (2017)

“I have no pen…and not m 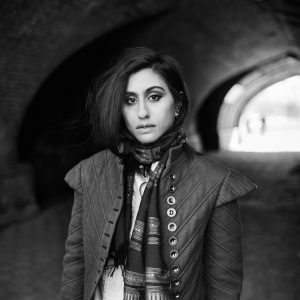 uch to say, or rather too much and not the mood,” wrote Virginia Woolf in a diary entry dated April 11, 1931. Eighty-six years later, the essays which form Durga Chew-Bose’s first book, Too Much and Not the Mood, echo its namesake’s concern about editing oneself in order to please readers, and questioning if she has anything worth saying after all. In what critics have described as “a dazzling display of action and description” Chew-Bose’s debut collection explores the complexity and potential of revisiting one’s past, ultimately questioning the usefulness of such an endeavour.

In the final line of “Part of a Greater Pattern,” the second essay in the collection, Chew-Bose meditates on her embodied memory of her childhood home and former social scene. She writes, “like omens I neglected, like apprehensions I would only later—much later—understand as how my body was, in its way, anthologizing my childhood.” The word anthologizing is key here because of how it relates to tracking one’s own experience, as in the practice of journaling. Chew-Bose reminds us, and herself, that she has lived through everything recorded whether or not she shares the experiences with us—and whether or not we are interested in her way of recounting them.

But if Chew-Bose’s project is working towards an anthology of memories, then the question of editorial intention implicit in the collection’s title returns. Journals, or diaries, are not written to be read by other people. Inversely, the personal essay occupies a realm left alone by the diary entry — in recent years it has become synonymous with airing out the most private parts of your life to the public, often with a comedic flourish. As Haley Mlotek writes in a 2015 article in the Guardian, “‘more is more’ when it comes to the personal essay.” While Too Much and Not the Mood is labeled a book of essays on its front cover, the titular Woolf reference combined with the looping stream of consciousness structure and rapid fire details position Chew-Bose’s book as somewhere in the middle: toeing the line between uncensored anthology and shining personal essay.

Woolf’s diary entry meditates on the habit of censoring oneself in order to be presentable to others. Chew-Bose similarly derides the tendency to over-edit. In discussing the practice of writing in Heart Museum, she says, “the intention shouldn’t only be to polish what we start but to acknowledge that beginning again and again can possess the acquisitive thrill of a countdown that never reaches zero.” Later in the same essay she ponders how to present what is finished while “also taking comfort in knowing it will evolve.” She favours sentences that have the effect of stopping short, “of dirt and cutaway rocks tumbling down the edge of a cliff, alerting you to the drop.” Her writing hurtles forward at breakneck speed, giving the illusion of being reflexive rather than over-thought.

The essays are most compelling when the structural conventions of the genres are blurred. Chew-Bose opens “Heart Museum” with what appears to be simply a list, exploiting the listicle trope and then bleeding into personal essay, by orienting the piece around the number of tasks that are completed while a heart is beating. As the source inspiration falls away, Chew-Bose indulges in this newly carved-out space to wander and create the diary-like prose that constitutes the bulk of the essay. Before this mode of discourse gets tiring, she returns to the heart framework and reveals the initial model for the essay: “While I rely, perhaps in excess, on my wad of massed-together nostalgia and unrelated brain waves, my hope is that there is in fact a frame.”

“Heart Museum” is the best example of Chew-Bose’s detail-oriented style of storytelling that cycles through lists and memories, strings of tiny moments that celebrate the vastness and absurdity of the world by way of a series of small anecdotes. Not the Mood dispels the idea that anything has ever been mundane. She writes about life’s endlessness, and the subjects within: race, divorce, family, pop culture, identity, and love. These essays thrive on nuance, and are effectively a nexus of person and world.

The question we’re left with is how Too Much and Not the Mood’s position between personal essay and diary successfully manages to satisfy her desire for a personal text while continuing to be entertaining and revelatory for readers. Chew-Bose is as savvy about the relationship between herself and the reader as she is her stylistic similarities to journaling. There are lines that reveal her awareness of herself as a public storyteller: “This piece […] is largely composed of interceptions. Starting somewhere, ending somewhere else. Testing the obnoxious reach of my tangents. Likely failing.” And so, Too Much and Not the Mood balances precariously between an object written for the author’s own pleasure and practice—the way one would write a diary—and writing to communicate with a readership, the way one would write a personal essay. The result is a self-aware hybrid that insists on a space of its own between the two genres. —LEC