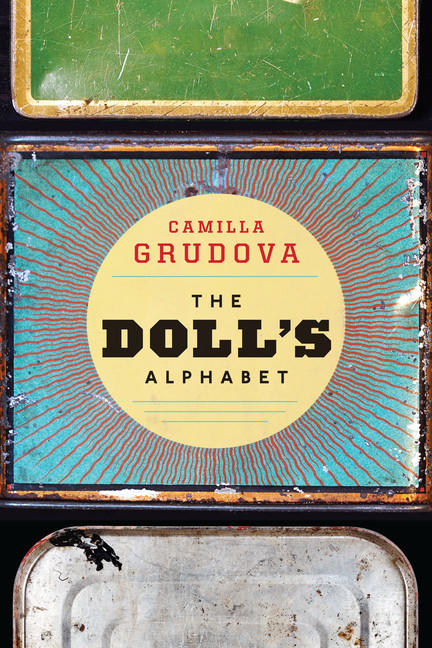 Camilla Grudova’s debut short story collection The Doll’s Alphabet is palpably weird. A gothic pastiche of peeling wallpaper, scurrying cockroaches, and canned food—the world she creates in these thirteen stories is chillingly vivid despite the fantastical nature of the characters and events that populate it.

The book has drawn immediate comparisons to Angela Carter for its magic realism and macabre tone, but the similarities are mostly aesthetic; although Grudova’s stories have feminist undertones, they lack Carter’s overt social commentary. This is not a bad thing: the collection’s strength lies in its unsettling aftermath, the imprint of disturbing and undecipherable images that emerge and fade, only to float back to the surface in the next story. In the first story, “Unstitching”, the protagonist learns how to unstitch herself: “Her clothes, skin and hair fell from her like the peeled rind of a fruit, and her true body stepped out”. When the men in the story try to do the same, attempting to unstitch themselves with razor blades and knives, they only end up “wounded and disappointed… [for] they had no ‘true, secret’ selves inside, only what was taught and known.” The disconcerting stories are undeniably feminist in tone, but it’s the imagery that remains burned into the mind’s eye.

There is little biographical information available about Grudova, but she revealed in an interview with The Culture Trip that growing up without television or the Internet, the first machine she encountered was a sewing machine. It functioned both as a practical tool to create dolls, dolls’ clothes, and clothes for herself, as well as a means to bring her fantasies to life: “It was very much an imaginative tool for me so I associate it with writing.” Tellingly, there are no smartphones, nor is there any mention of the Internet in the universe of these stories. “I find old technology useful to use to think about new technology, like not staring at something directly, maybe looking at its shadow instead. I love the Emily Dickinson line ‘Tell all the Truth but tell it slant—’”says Grudova. If Grudova’s fictional universe is a post-apocalyptic one, it still shares certain cultural references with our own: characters listen to Tchaikovsky, marry men with slicked back hair “like a young Samuel Beckett,” and encounter Hans Christian Anderson and Ovid.

While several of the stories are strong enough to stand alone—“Waxy” and “Agata’s Machine”, the stories picked up by The White Review that led to Grudova’s book deal in particular—it is in the conversation between the pieces that patterns begin to emerge. The Doll’s Alphabet circles back to motifs rather than themes; babies, non-perishables, rodents, and of course, dolls, appear again and again. Indeed, at its core, this short story collection seems to be just that—a collection of things often enumerated through strange and detailed lists. At the end of The Doll’s Alphabet, we are left wondering if humans really have more agency than the objects they collect, or if we are the ones being possessed.

The universe in The Doll’s Alphabet is a slant one; it’s recognizable, but with the shadowy certainty that something is undeniably amiss. In “Hungarian Sprats,” for example, the protagonist decides to seal all of his possessions in tin cans for a transatlantic trip. At this point canned food has appeared in nearly every story preceding this one, whether it’s the tinned peaches and meat the characters subsist on in “Waxy”, or the fishy smell wrongfully attributed to several characters obsessed with canned seafood in “The Sad Tale of the Sconce”. “All over Europe, people opened cans, expecting to find fish, but instead finding the following,” begin two lists that comprise nearly the entirety of the final two and a half pages in “Sprats”. The lists demonstrate the breadth of Grudova’s imagination, which revels in descriptions as startling and unconnected as “a maroon celluloid dildo” and “a retractable gold and ivory back-scratcher in the shape of a dainty hand.”

Grudova’s lists serve a second function as well: they create repeated patterns throughout the collection that nudge the reader in search of connections. But recognizing patterns and discerning their meaning are rather different tasks. Carter’s work is instructive—The Bloody Chamber, for instance, is a collection of fairy tales with empowered female characters. Grudova’s stories, meanwhile, are content to solely reflect our societal problems: characters of any gender, although inhabiting their normative roles, are equally powerless in her slant world. The uncomfortable closeness of Grudova’s ominous world to our own is point enough. The inability to decipher an immediate or obvious meaning contributes to the nagging, albeit pleasurable, sense of unease. The afterimages from these stories persist so vividly in the subconscious that the overall effect is of a remembered dream: pleasurable, mysterious, and haunting.—Quinn Mason

Read an excerpt from “Unstitching”, previously published with permission on Lemonhound 3.0 here.