Our Lady of Perpetual Realness and Other Stories, Cason Sharpe. Metatron Press (2017). 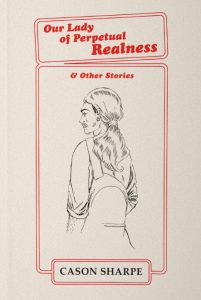 It’s 2017, the year of the great avocado toast debacle, and Cason Sharpe’s debut chapbook of short stories is here to deliver some late-capitalist millennial realness. Six short stories converge thematically around the cost of things. Here, everything has a price tag, often an emotional one. What is the cost of two months rent, a bag of popcorn, or not knowing you had to bring your own condoms? Like Sharpe, the stories progress from growing up in Toronto, to young adulthood in Montreal. Readers follow six gay men of colour through a range of low-wage jobs and the awkwardness of coming into yourself as a young adult.

In “Scam”, a sketchy call center’s corporate culture forces minimum-wage employees to perform a normative identity, erasing identifying aspects of themselves. The protagonist is well aware of this, as he tries to “keep [his] voice ‘neutral’ […] suppressing any auditory hints of Blackness.” In the eponymous “Our Lady of Perpetual Realness,” the narrator also reveals conflict regarding his identity, this time as a gay man of colour in Montreal’s queer community. A question of belonging hangs over him as he chooses between partying in Montreal’s gay village, or staying uptown with his close friend Kalale (clearly based on real-life friend and podcast co-host, Kalale Dalton). Her interjection—“Fuck no, I’m not going to the village”—speaks volumes about the nuanced divisions between the city’s often disparate LGBTQ communities. The protagonist, who ultimately decides to go with the gays, notes his hot makeup, his perfect wig, and his out-of-placeness in a downtown club full of sequin-dappled white bodies.

In Sharpe’s personal essay, “A Year and Change,” published in GUTS Magazine this June, he points out that poverty is “a fourth strike” on a list of intersecting marginalizations (in addition to being a gay black man), and refers to Eileen Myles’ description of class as “one’s ability to sustain constant small amounts of loss.” Sharpe astutely notes this loss in “both the material and the affective senses.”  Our Lady of Perpetual Realness & Other Stories digs into this concept, its fundamental gloom revealed under a lacquer of deadpan humour that is both brilliant and chipped. The collection is consistent, horrifyingly relatable, and the jumping-off point for Sharpe, a genius freak we should all keep an eye on. –Mick Hennessy for LEC