I
of course, no living is continuous,
we take what grows within
we cast them out as though to bloodlet

the life of its lesser sorrows;
it would be easier to brand
the blackened teeth,

the half-headed thing,
the hooved human
as something began in precurse,

landlines, formless substance, hungered
from the mutant offering
of fortune-telling

II
what has any of this to do with
presences, the space that cuts through
what language must be:

from Malawi. mouth: you mothering
anagram. swum from return. give age
to the ravenous dog searching

its own lure of an origin, pushing
the silence of a broken storm, back
to defend its dead.

III
of course, living is continuous
slow regret marbling a hope,
you remind me to arrive here, again,

and yes, i walk, unflagging the morning
understood from this drying version
of a faith. look, i’m just like you,

breath struck through a self, voice-spun,
like the scream of atoms before birthed sun:
and where began that fruit, now ruined, in the mouth

i’m terrified to kiss, and how
to be great in this gathering
misfortune of crowds 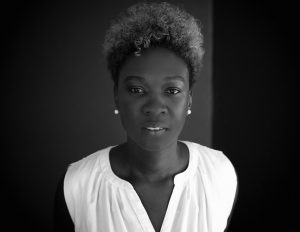 Canisia Lubrin writes. Among other things, she is an editor and teacher and holds an MFA in Creative Writing from the University of Guelph and a BA from York University. Her debut poetry collection, Voodoo Hypothesis (Wolsak & Wynn 2017), appeared on multiple notable book lists, including CBC’s Best Books of the Year.