TO THE EXTENT A TRADITION CAN BE SAID TO BE DEVELOPED; IT IS MORE ACCURATE TO SAY IT CAN BE CLOTHED IN DIFFERENT FORMS

As three persons in one, I come to this life:
the one in it, the one beside it, the one far away.

As one also are my three enemies, and singular
the effect of meds taken at mealtimes.

A three-legged table fits nicely in its corner, like a soul in the cleanliness
of a realm of figures whose mathematics cannot lead to error.

Spinoza so loved the triangle,
he wished to understand God that way.

Pythagorus distrusted nature in its even numbers
which appeared to him, in their easy divisibility, female.

Though the four spiritual violences, four heavens, four hells,
are, like a six-figure salary,
more than seems, strictly speaking, necessary.

The three ways the devil is apparent, you should know them.

And the three waters to which we may be lost,
which flow from injury, exhaustion, sorrow.

Five rows of folding chairs were the first thing police saw
in the starved toddler’s home, and in the home
the seven symbols, and the five kinds of harm.

In the highest place, with no company,
of no definite colour, beak in the air,
sweetly singing lives the solitary bird.

The three laws of sympathy, of inner recollection —
do not be lukewarm in this work.

a story told also about St. Columba,
who, nicknamed St. Colm by the lowland Scots,
was known to the English as St. Qualm, meaning
torment, violent death, destruction, plague.

Cassian’s six ranks of angels correspond to Columba’s.
St. Gregory improved on this, as was his habit, by adding three.

There are twelve rungs on the Desert Fathers’ ladder to perfection.

All you have to do to achieve the last one is to die.

A note on the poem: Though the stories and enumerated categories appearing in this poem have been retold and revised many times over centuries, I’ve drawn on E. Allison Peers 1959 translation of Dark Night of the Soul, a 16th-century text by St. John of the Cross, as well as on Thomas Owen Clancy and Markus Gilbert’s translated collection The Earliest Poetry of Iona — particularly Part 3, “The Alphabet of Devotion” — published by Edinburgh University Press in 1995. –Karen Solie 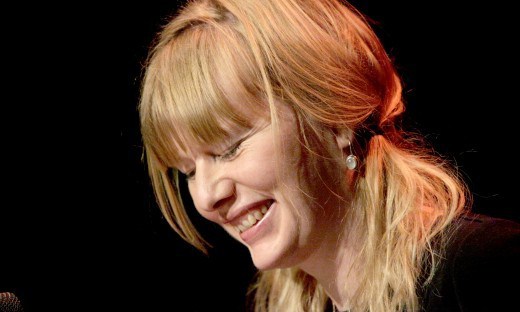 Karen Solie is reading tonight, at the launch for Lemon Hound, and again, at Concordia on Saturday, March 17th at 5:00 in the York Amphitheater in the EV Building with Stephanie Bolster & Tess Liem.