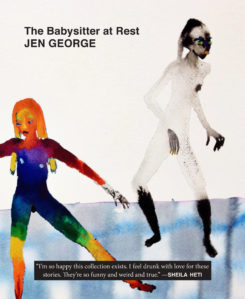 Writing a review for the five stories that comprise Jen George’s debut collection, The Babysitter at Rest, has been somewhat of a riddling task. George has skewered her subject-matter so thoroughly that often the stories are too sharp to swallow. She ploughs through the grotesque, her depraved descriptions multiplying exponentially with the passing of each story. When I could catch a breath, I cheered; Babysitter calls each shit-covered spade a shit-covered spade. George’s collection was published in 2016 by Dorothy Project, a publishing project with a focus on works of fiction or near fiction or about fiction, mostly by women, a suitable home for this collection. Comparisons have been made between Babysitter and Camilla Grudova’s collection The Doll’s Alphabet; both authors paint unapologetically twisted and vivid scenes.

In Babysitter, time is up for the characters—they cannot sustainably exist in their world, and so a tsunami of a change must occur, dragging out to sea or current immobilizing systems. George keenly situates her collection in this moment of becoming, when new ways of existing emerge. Her stories take place in a warped, chemically-imbalanced dystopia where every single one of the female characters are subjected to various kinds of imprisonment in their hyper-sexualized bodies. Her stories are absurd, at times tipping into unreadably toxic, and this is the point. To go beyond narrative structures that perpetually rely on degrading depictions of women, a firm yank will be required – an action that George is not timid about participating in. To fully grasp what kind of tradition needs to be done away with, George drags us through bleak situation after bleak situation, always with emphasis on how close our present realities are to her grimy ones. In the opening of the story “Instruction,” an unnamed narrator explains the “Origins of Action”;

I was sexually attractive, which is highly valued in college and art circles as well as in other hierarchical scenes mimicking the structure of capitalism wherein older men with large hands finger younger women who read novels and possibly write or paint or play an instrument and make declarative statements such as, “If I had to work at an office in Midtown nine to five I’d jump off the George Washington Bridge” or “I’ve never been out of the country.”

At certain points, hopeful gaps begin to bloom in the narrative—just big enough for these fated women to slide through, an opportunity to find some semblance of respite. However, the character’s almost never make it through that gap. In George’s world—a world that is less antithetical to ours than at first it may appear—protagonists existing in female bodies are simply passengers on this wonky carnival ride. There is something uncanny about a male professor saying, “how about a shoulder massage?” to a young female student while “sitting at an Irish bar in Queens,” or deriding her next semester’s project comparing “the female orgasm” to shock waves emitted from colliding asteroids.

In the title story, an unnamed narrator has been “given a fresh start” by beginning her life anew as a young adult, somewhere between the ages of “seventeen to twenty-two.” The only rules are that she must “start pretty broke,” and she has to have roommates. What follows is a young woman’s self-worth being sucked in by the orbital force of an older man’s ego. After meeting Tyler Burnett at a party—who introduces himself by saying “I hear you’d look nice in a swimsuit”—the narrator is then in a swimsuit for the rest of the story, at one point noting “when I’m not at work, I’m in my bikini.” She ends up babysitting his infant who never ages, stuck in the body of a baby forever. The story is an amalgamation of disjointed time that the narrator experiences, a recounting of energy being spent on everyone but herself. Whether it be watching older men with grey hair come onto their stomachs while lying on sunny deck chairs, having the honour of looking after the houseplants at her office job, or watching Tyler Burnett’s wife paint a mural on the baby’s changing table titled “The Babysitter at Rest.” She is perpetually done onto, without a chance to grab her own narrative. She says to the baby, “I get paid ten dollars an hour to watch you… I am not your mother.” Towards the end of the story, when stewing over how she has been spending her time, the narrator rambles off a list of categories under which to file the moments she has spent with Tyler Burnett; “sex, sexual positions, sore buttholes, chaffed nipples, vaginal hickies, blisters. It could also be ice cream, or swimwear. Things that are not mine. Youth.”

Neuroses grow like an invasive species, increasing as each new narrator is subjected to another round of insatiable patriarchal expectations. In perhaps the most absurdly venomous story in the collection, “Take Care of Me Forever,” another unnamed narrator lies on a hospital bed “being pumped full of morphine and oxycodone, vomiting, then being pumped full of the same medications, [and] recalls the ways [she] has always been.” The narrator is at the mercy of a doctor turned sculptor turned painter turned Renaissance Man, who at one point states, “my own image is all I paint now.” She is then put in a full-body cast, told that all of her bones are broken (but they can’t be sure), only to then be cut out of the cast so that the doctor can ejaculate inside her. She is then put back in the cast. Later, she is diagnosed with “auto-pregnancy”, meaning that her uterus stores sperm and fertilizes an egg every month. George locks women in their bodies, ties them to men who “banish women to a realm where they never stop aging and never complete any work, especially if they are struggling playwrights.” Underneath George’s repeated action of putting pins in the taut surface of these sexual dynamics, there is a larger motion taking place: the uncomfortable shift that takes place when the physical body moves into a new phase, an unguided space. Individuals are urged forward by normative claims about ‘the way one ought to be’ in our 21st century. In the first story, a young woman is guided by a savant, alcoholically-indulgent Virgil-like party planner called “the Guide,” who sneaks in through the hosts’ window, insisting that she throw a party in order to celebrate her newly-attained adulthood as a 33-year-old. Instead, the Guide applies pressure on the narrator, seemingly with the hope that she’ll burst. When doing a run through of potential conversation topics, the Guide suggests “literature,” which prompts the narrator to go on a Dante spiel. The Guide interjects, “Yes according to your file you read The Divine Comedy during a brief phase of ephedrine addiction, bulimia, and suicidal ideation in your teens. At your party, the mention of reading classics will be viewed as obnoxious and irrelevant.”

George writes through, not around, the nuclear, patriarchal waste of our current world, seemingly with the hope of bringing us to the other side—whatever form that may take. These five stories grab on and don’t let go: the tooth marks they leave are here to stay.