Montréal, Quebec: I return to the site of an old novel. This will not always be a street of failure, even if still playing the former glamour of the seedy. French-language covers of country music are playing on the radio. Men (sit) alone at tables. One with haggard bearded face. His lower jaw (is) toothless. Teeth in dreams = sex. The low façades opposite parading peeling tin cornices. An air of stagnation possibly verging on cliché. I take some verbs out; put them in again.

It is the hottest summer ever. Meteorologists are, with divine hindsight, admitting global warming. To escape the heat, I go to a dark afternoon theatre. Where a sassy high school troupe’s performing Büchner’s Wozeck. The adolescents’ sweet songs juxtaposed on the gloom and violence under, somehow dissolving earlier-decade interpretations foregrounding worn-out existential despair. Crossing a parking lot behind a smoked meat shop, I am thinking a story, to avoid eternally returning (to keep it moving), might be structured thus: an ‘older’ woman writer circulates at a ‘fringe’ theatre festival of young artists. She has lost her love. Feels discombobulated. Nothing. She skirts the crowd asking several twenty- year-olds: anything good? She will then string a humiliated (but raunchy) love tale together, interlaying bits of youthful sweetness and anger, representing to her in her present state of emptiness, a more contemporaneously rapid conflation of beginnings and endings. A word about narrative:

At another table, a man shakes his purple-shirted shoulders in the hot bar air. To ‘Caught With Your Pants Down.’ Drinking straight tequila. The same table where C. and I sat. Discussing why our favourite writers of ‘new’ (experimental) narrative are not rich and famous. ‘Too abject?’ she ventures. In a bag at our feet, some cheaply extravagant dollhouse boudoir furniture purchased for her little son. From the store with the saggy awning opposite. Leaving, we forget it. Outside another man passing. With several teeth missing. Teeth = action. But why the narrator (the woman) endlessly remarking. Such toothless ghosts of subjects. Among dozens of better-furbished faces? Is her ‘local’ constructed out of some kind of distancing or bias? Or ‘mere’ projection of love’s losses? I am thinking not abject the subject. Unless negatively framed at point of conjunction between work and the world. When site’s signed minor (inadequate). And exterior = dominant. Yet, intrinsic and extrinsic syntax are not separate; rapidly they mate.* Should I be happy the lover having sex with no one? If having only virtual sex with me? I take some verbs out. And put them in again. A word about the waitress:

Dominatrix in clinging leopard-spotted polyester. Small breasts. Ponytail. Fortyish. Saying (in québécois): UN verre de vin-maison ne te fera pas de mal, one glass of house wine will not ruin the stomach. I.e. it’s terrible. For 75 cents more you can have a quarter litre. Adding: you look en forme, terrific. We tell each other – in guise of complimenting – we haven’t changed in years. I opting for the smallest quantity of red vinegar. Now young woman passing by window. Huge breasts encased in tight halter top. Some little cap over short hair. And – upper incisors gone. Like the meteorologist, I admitting only to coincidence of circumstances. Projecting accumulated lack on unsuspecting bodies. (Waitress bringing unasked for quarter litre.) Which bodies, in being thus sentenced, already frozen in past gesture or alias. While environment drifting elsewhere. As in that restless white river lover wanting to attack with kayak. Drifting eternally toward full-colour horizons. The silver flashes indicating minor notes of salmon struggling upstream. Sitting close beside her, I ironically allowing such tergiversation, such battering by context, likely ideal posture for contemporaneous narrating. Just as lover putting hand under skirt cut on the bias to flare out attractively at the bottom. And saying she still wanting something with ‘us.’ A story is something you can put your teeth into:

But what might happen here? With (soon) a closed sign across the window. Two blocks down. A polished glass and marble multi-storey, multi-venue, multi-media repertory theatre. Having replaced the crushed blue façade of the smoky cozy café-cinéma where we used to see old or experimental European movies. Built by québécois Soft Image inventor Daniel Langlois. We’re like that here: always oscillating between the ultra-modern and the crumbling. The sound system’s so efficient, one feels, watching the Buena Vista Social Club, as if in some club in crumbling Havana. Though the octogenarian musicians having mostly ceased performing on their blockaded island. Because ‘nowhere’ to go. Until Ry Cooder choreographing their (global) return. I am thinking of when Québec liberationists claiming solidarity with Cuba. Which solidarity currently updated to meaning ‘corporate opportunity.’ At last, the Cubans playing Carnegie Hall. I am thinking how narrative, if fronted, marketed from economically preferential geographical site, though being troped as exotically remote, must (paradoxically) scale global walls or languish. I am thinking of Cuban sunsets, suffused toward evening with a little blood. Of the woman’s eye growing humid, sentimental. When, in the movie, the elderly guitarist exclaiming: ‘There is nothing like a night of love.’ To keep it moving, I take some verbs out and put them in again. A word about identity:

Now the waitress in her leopardskin is leaning over the purple shirt. Who’s reading a sexy men’s magazine. Pausing, he pulls a huge fluorescent flashlight still wrapped in hard plastic cover from a bag. She points out (speaking [naturellement] French): it’s no good without batteries. Laughing. I can smell him. The conversation seguing to European-French actress Catherine Deneuve. The waitress declaring in drawn-out North-American French diphthongs Deneuve ‘plate,’ boring: ‘Always the same tone.’ Outside a friend passing by window. Looking for a date. Very strong shoulders. Her long red hair streaming out behind. I know she has latex gloves in her bag. Walking naturally, she ‘vogues.’ Causing her to get thrown out of women’s washrooms. For being ‘wrong’ gender. I am thinking how certain minor or unusual demeanors, if flaunted, getting read ‘extrinsically’ as unappealing or threatening. (In Canada, ‘French’ often = flamboyant or risqué; coincidentally, same thing for ‘queer’). This can be devastating. Or interesting. Friend passing again, very feminine in wrap-around skirt, curly red hair. Yet walking as if faking it. I am thinking how narrator (other). IF not knowing how friend herself-self-perceiving, able to create a relationship with reader permitting permutation of both obvious and unspeakable. The body being capable of gestures contrary to understanding. I am thinking of narrative as sub-stantive. Generated precisely at point of dissonance. By even-ing out subject/object weight at each end of sentence. A word about affect:

[It has never occurred to me to be a poet. The poet, even when ‘absent,’ rests imbricated in her utter façade of language. While the reader happily at play. In her sandbox of spaces. Lacking spontaneity, I am drawn to the violence of animation. Experienced by a subject. Drifting toward object. Across the placement of the verb. Which nakedness, exposure, seeming somehow progressive, egalitarian. Yet failing to make the woman (narrator) cease obsession with beginnings (causes) and endings (conclusions). So trauma still risking terminating in single unbearable seduction scene. I am thinking of certain literary feminists. Who using devices copped from poetry to construct porous or unbounded subject, capable of merging somewhat ecologically with context. I am thinking of the gap of the unspeakable. There may be no animal boundary – just the stream and the pleasure that lies in it, teasing the poet.* I am thinking about the portentousness of sentencing. Alternately (defensively?), I am thinking that a sentence in a community of sentences (paragraphs) somehow leaving impression of consciously reaching out in communicative gesture. Notwithstanding characteristic narrative flick of head back over shoulder. At point of the period. For purpose of getting … bearings. This I finding … touching. A word about the geography of the bar]:

Many empty tables. Two beefs in dark corner. Chairs fading outward. Toward sunwashed waitress, purple shirt and harsh light of street. Waitress, flashlight and me. A sign above our heads: ‘Les crevettes de MATANE arrivées!!! Fraîches. MATANE shrimp in!!!! Fresh.’ The drawn-out québécois fraîîîches savorously feminine and plural. The waitress and purple shirt still complaining Deneuve lacking edge. Offering as replacement québécoise country music star. Recently coming out with ‘fabulous cd.’ Though ‘star’ still having to work nightly in bars. Very tough if you’re pregnant. Outside, young nomad in artfully torn outfit and fifty-dollar-haircut. Asking for change in anglicized French. They come here from the suburbs. Not to feel guilty. In this huge dark room with stuffed animals on walls, I am thinking of simulation in a diminishing French-speaking city, where everyone considering themselves minority; yet in some way also faking it. I am thinking of consequence for narrative, so often straining toward ‘natural’ on site where continental popular culture in perpetual transmigration from Germanic to Latinate. Of Mickey Mouse, Patsy Klein, Sylvester Stallone, moving lips in English. While saying something else entirely. I am thinking of living on a Renaissance Ponte Vecchio: less bridge between than Babel of echoes.* Whose interpretation requiring, precisely, resistance to meaning. I am thinking of narration as introjection. Many relatives have dentures. A word about hybridity:

Two blocks up. Little stages. Blue-and-white fleur-de-lys flags for the fête nationale. The Argentinean tango I missed. Somehow having erased Québec ‘patron’ Saint Jean Baptiste’s bleeding and miserable little lamb. Featured in earlier decades’ national feastday celebrations.** Fête progressing north. Group doing samba. Québécois folk songs. Block production of Molière farce. Free good food. Everyone speaking ‘with accent.’ Whole family dragging mahogany dining table out on sidewalk. Now eating supper. Later, I, sleepless, listening to thunderclaps on John Cage piece. To compensate for dryness. Leopardskin waitress offering another glass of vinegar. Muscled guy in tight sleeveless t-shirt and gleaming chain with cross. I am thinking of narrative as opaque barrier. There is no limit between life and deathly fascination. Viva Che! on wall. Now I must go before another cigarette. Buy food. Take messages. If any. The disease is not under control. Police car outside. 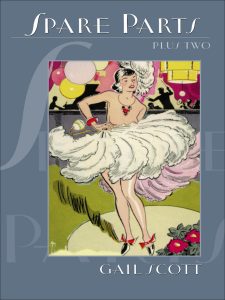 Excerpt from Gail Scott’s Spare Parts Plus Two, Coach House Books, 2002. Posted from the original with permission from the author.