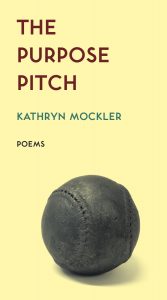 Kathryn Mockler’s chaotic third collection of poetry, The Purpose Pitch, irradiates the deep strangeness of our modern world. The collection embraces various forms, be it dialogue, found poetry, prose or script, which expose the characters and content from all angles. Mockler’s characters move through the collection with a subtly divine knowledge, like everyone (and everything) is “in on it” (the “it” being their whole entire futures). This is seen in the second poem of the collection “Angel at the Bus Stop,” about a back and forth between a woman and an angel. The characters seem to be almost aware they’re in verse, calling the predictability of things before they happen.

—No, she said quickly. I can’t spare a dollar. Besides you’ll probably just spend it on alcohol and drugs.
—That’s exactly what I plan to do, he said.
—I know, she said, I saw it coming.”

While at first glance the absurdity of Purpose Pitch may appear comedic, the poems often subvert, or are in conversation with the byproduct of the society they were produced in. “Byproduct” meaning relics of capitalism, meaning google searches, television interviews, buzzwords and hashtags, all beginning at the vast and vulnerable human brain. She writes from within the nexus of satire, confrontation, and celebration—a trio that effectively exposes the sludge of modernity. The poem “Skyler” is a violent, two page compendium of disorganized and threatening slurs targeted at the poems’ namesake. It channels a voice of mass misogyny, horribly familiar in its tone: “…Skyler fuck her fat sea cow head such a fat fucking head WHY IS SHE SUCH A CUNT finally I’ll be honest…” Then, immediately after “Skyler,” is the poem “World 4,” a mere two lines at the top of the page that read: “How old were you when you realized the world was a nightmare from which you could never wake.” There is an honesty in the discontinuity between these pieces, one that addresses that life is dense with a proximal violence, seemingly eternal in the 21st century.

Mockler’s poems are thoroughly entrenched in the real world, often drawing from numerous points of reference and inspiration. She expands on this in an interview with All Lit Up: “[the poem] You Look Like a Puppet… comes from an interview Joni Mitchell did with the CBC in 2013. I wrote down fragments of the things she said during the interview and then mashed them together to form short poems. Her line ‘I never liked poetry’ gave me the idea for the series.” The structural and subversive nature of the found poem lends itself well to The Purpose Pitch. The poem “April 30 – May 31, 2014,” composed only of headlines from local newspapers about women who have been sexually assaulted, is the longest piece in the collection, running an excruciating ten pages long. Meaning is found in the poem’s laborious repetition; a disturbing assertion that it could continue forever in both directions. In “Your Poem Should Have Four Legs,” Mockler, again, cleverly uses repetition, moving from imperatives that at first appear personal, to phrases of similar sentimentality and popularity to that of a of stock photo, a voice which comes from the blunt, blank, urgency of the collective consciousness; ironically personless.

The Purpose Pitch might be small in physical size, but it is by no means at all, a small book. This is a bold collection both challenging and moving, about a world of equal fervor.