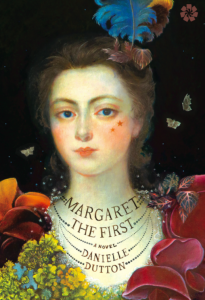 If atoms are so small, why not worlds inside our own? A world inside a peach pit? Inside a ball of snow? And so I conjured one inside a lady’s earring, where seasons pass, and life and death, without the lady’s hearing.

Danielle Dutton’s latest novel brings a historical figure to new life. “My own quill went marching across the page,” declares Dutton’s portrayal of seventeenth-century aristocrat Margaret Cavendish. “I rejected any clocklike vision of the world.” A nonconformist in both writing and fashion (she once attended the theatre in a topless gown) the femme forte makes a routine of transgression. She was a passionate philosopher, scientist, and writer among dreary male colleagues, including both Hobbes to Descartes. Margaret the First explores the Duchess of Newcastle’s early feminist influence while celebrating utopian thought that questions convention and upends rules, in any era.

Centuries ahead of her time, Margaret’s essays, novels, and plays imagined a world free from the constraints that bound Renaissance thought towards writing, gender, and knowledge itself. “Why must grammar be like a prison for the mind?” she wonders, her lifelong love for writing unencumbered by the rules of form. “Might not language be as a closet full of gowns […] filled with difference and a variety of trimmings so that we don’t grow bored?” However, Margaret’s work was not always received with openness; many contemporaries and successors were appalled by her writing style. In A Room of One’s Own, Virginia Woolf refers to it as a “higgedly-piggedly” outpouring of “nonsense,” comparing Margaret’s prose to a “giant cucumber [that] had spread itself over all the roses and carnations in the garden and choked them to death.”

With this sort of reception in mind, Dutton’s account of “Mad Madge” offers a refreshing perspective. Margaret the First focuses intimately on the woman behind the celebrity face and published works, recognizing a need for exploring the plurality of marginalized voices within, and beyond, literature. It takes on the structures that define women’s roles in exclusionary spheres, and breaks with literary formality and rigidity to do so. The text’s rejection of narrative convention—with ‘chapters’ as short as fifty-one words, to a drastic change in point of view that strips Margaret of her “I”— requires the novel to be re-categorized as a sort of extended, experimental prose poem.

Even in death, Margaret is immortalized through writing that refuses to submit to convention. The inscription above Margaret’s tomb in Westminster Abbey, where she is buried with her husband, gives her ownership of her identity and mind in an era that seldom referred to women as more than simply someone’s daughter or wife: “This Duchess was a wise, witty and learned lady, which her many books do well testify…” Narrated with a sense of historical displacement, the undying power of Margaret’s life is in everything yet to come. She is an example of the impact that one woman’s work had—and can have—in staking a claim to a new, blazing world.

As Lemon Hound grapples with the recent unmasking of sexual misconduct and abuse of power within Concordia University’s creative writing department, we, like Margaret, have been imagining. What could our world look like without its suffocating structures, its unwritten style guide? How do we move forward and promote change? Perhaps stories like Margaret the First, with its innovative twist on history and writing, can point us in the right direction.