Here are three short takes from our editorial collective.

ML on Karen Solie: The Road In Is Not the Same Road Out 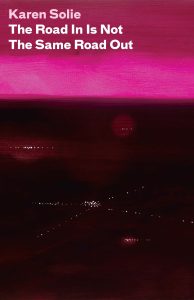 “You’ve outlived your design. / Would need to be retrofitted for safety / and who has that kind of time.” So ends Karen Solie’s terrific “For the Ski Jump at Canada Olympic Park, Calgary,” one of many poems detailing the exhaustion of Canada’s aging infrastructure and urban sprawl. But infrastructure isn’t the only thing due for maintenance in Solie’s fourth collection, The Road In Is Not the Same Road Out. With this book, Solie invites Canadians to join her in negotiating a national subconscious. In “Life Is a Carnival,” a poem about revisiting one’s childhood home on Google Maps, Solie interrogates how we relate to the scenes of our childhoods, asking, “would we burn these places rather than see them / change, or just happily burn them.” Questions are asked throughout the collection to great effect, capturing the psyche of a nation perplexed by its abundant wealth, poverty, youth, and signs of aging. “Look at your past, how it’s grown,” opens “All That Is Certain Is Night Lasts Longer Than the Day,” a poem probing nostalgia as a simultaneously physical and metaphysical presence likened to “the distinction of Ottawa from Hull, Buda from Pest.” The poem seems to beg for the clarity within that final moment. What Solie does with such simplicity is magnificent. The Road in examines how our deepest discomforts, pleasures, fears, and nostalgias connect to each other; how our actions and ideas shaped the communities we’ve left and the communities we create.

KT on Lisa Pasold: The Riparian 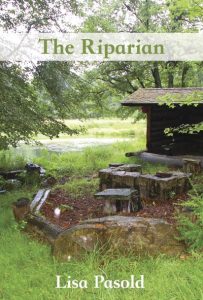 Lisa Pasold’s latest collection of poetry opens with an unsuspecting outsider falling, quite literally, into the world of the River—a spectacular agglomeration of the dank and murky, the dark and forsaken. Here, a guilt-ridden pirate sings flirty karaoke, the bartender carves her own tattoos, and a mythological superintendent with river weeds for hair feeds on sorrow and oppression, drowning the dejected and the lost in his swamp. In its six sections, The Riparian seamlessly blends poetry and prose, taking the reader through tragedy, loss, and transformation grounded in locations along the sodden New Orleans riverbank.

The allegory of the River, teeming with a riparian faction of misfits, is woven through the speaker’s every experience. What seems like a poorly maintained waterway is given deeper meaning with the curious realization that “everyone here has fallen one time or another […] into that water and drowned.” What, in fact, is the big, bad River, if those it consumes do not die? And what of the Nix, the spirit that entices his victims to the edge, and, when starved of the toxic runoff of the human condition, becomes himself a man of flesh and feeling?

The speaker’s thoughtful perspective brings to life a pocket community, like the newcomer’s stray dog and the pirate’s bottlecap cape, discarded and reclaimed. Pasold’s somber yet rich world of The Rip, where outsiders raise their dirty glasses to their shared marginalization, poses further questions about the state of the world, the self, and the capacity for seizing one’s agency from within.

Like the moral of a hideous fairytale, Pasold’s closing poem sheds the grime of her narrative world and leaves the reader with a line like a cup of coffee, rounding off a meal: “The Nix lures you to the water and pulls you down. Sometimes you go willingly. Sometimes you fight.”

KAL on Will Aitken: Antigone Undone 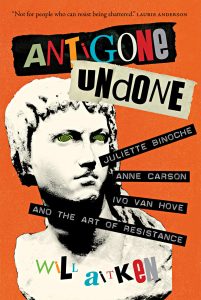 Two winters ago, Will Aitken was invited by Anne Carson to view the preliminary rehearsals of her adaptation of Antigone in Luxembourg. What starts as the seemingly simple task of documenting the events of the next three days generates unexpected emotional responses from Aitken. In Antigone Undone, Antigone’s battle against the hegemony of her time brings Aitken to the brink of madness, as Sophokles’ tragedy persists two thousand years into his contemporary world of strong-handed governments and gender inequality.

The book is divided into three parts and a coda. This first part is an account of travelling with the acting troupe, the second is a series of interviews conducted with Anne Carson, Juliette Binoche and Ivo Van Hove, and the third is a breakdown of the various interpretations of the play by academics such as Woolf and Kierkegaard.

In the second part, Aitken does a superb job of capturing the complexity of what is required to create a successful adaptation. By interviewing Binoche, Carson, and Van Hove, then splicing the collected interviews together to form a narrative of how the production came to be, Aitken highlights the experience of the actor, director, and writer independently, as well as each person adapting while working in tandem with their production team. What is the emotional cost of playing Antigone every night for a month? How is the tension between the masculine and the feminine presented in the language of Sophokles’ original text? How does one stage a modern adaption that doesn’t confine its key arguments to the contemporaneity of the present  moment?

In the third section, Aitken juxtaposes the dramatic movements of the play and a growing sense of helplessness developing within himself. At the tipping point of a mental breakdown, we find Aitken on a hotel balcony in Amsterdam, staring out at the harbour on a cool night. “All I can think is, Nothing’s changed. In the two and half thousand years since Sophocles wrote Antigone, the world persists unaltered.” Aitken plunges into a deep depression. His plummet acts as an interlude to the book’s occupation with the play, as he wanders around Amsterdam in search of reprieve from a depressive realism. He parallels his world with that of Sophokles’, a world in which we find “innocents and rebels crushed, power rampant.”

Aitken then moves on to consider several interpretations offered by critical minds attempting to dissect Antigone’s motives. At times, Aitken is clearly biased and comically blunt, which strengthens his analysis by engaging with the work in a playful manner that does not interfere with the author’s own objectivity. He argues that writers like Hegel, Kierkegaard, Woolf, and Butler have cast their own views over the play, entangling Antigone’s essence in ideologies that ultimately diminish her in some way. Generally, by forcing her to adhere to their arguments’ logical systems. Aitken ends up siding somewhat with Bonnie Honig, a professor of modern culture at Brown University who suggests that Antigone’s rebellious spirit springs from highly confused and complex family dynamics. Combined with the notion of the aristocracy versus the polis, a subject particularly relevant during Sophocles’ time, Antigone “acts politically in impossible conditions,” as a woman, as a child of incest, and as an aristocrat seeking rights for the private burial of a traitor during a time when the dead were to be mourned en mass. Antigone Undone’s narrative ends with Aitken regaining stability through the help of a shrink, and a concession that Antigone’s is perhaps not meant to be completely understood. Aitken speaks to the corpus of academic writings concerning Antigone, as making her appear as. “Less a girl, more a concept. Less a fighter, more a theory. Less a loss, more an explanation.” There is a human element in seeing Antigone’s struggle on stage that triggers us in a way that can never be completely unpacked. For Aitken, it appears as though empathizing with Antigone and recognizing the translatability of her hardships made him susceptible to the unexpected, over two thousands years of relative stagnation regarding several social justice issues. But like Binoche says at the end of the book. “You must embrace your character’s pain and the pain of the world. You must do that, or why bother?” Because once we understand the nature of a particular suffering, we can begin to heal it.