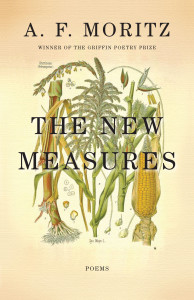 Welcome to “On Beauty,” a series of interviews with contemporary poets about their relationships with beauty.  For a complete introduction to the project, see poets-on-beauty.   I’m delighted that this month A. F. Moritz has taken time to think about beauty.  I admire Moritz’s poetry for the way in which his intense intellectual engagement is animated by  a sense of moral urgency.   What he writes feels like an offering, including the essay he tenders here.

I asked Moritz the same three questions I’ve been asking all the poets involved in this project:

He has chosen to respond with an essay, which begins by addressing the last two questions and ends with a discussion of two poem fragments he finds beautiful:

I think beauty in poetry now is not separable from the idea, and fact, of an accidental structure. The modern locus classicus of this is automatism, in Surrealism. Though thoroughly developed there, the thing and the awareness of it and the motion toward use of it are present throughout the modern era, since the late eighteenth century—less consciously, less fully worked out and adopted, than in Surrealism—and often only in the form of procedures similar and parallel (free writing, notation, etc.) but more mixed than Surrealist automatism with the rational approaches it wished to elude.

In my term “an accidental structure” one might substitute “automatic” itself for the adjective, or “spontaneous”, or “obsessive”. Another possibility is “occasional” in its sense in “an occasional poem”. It’s sometimes been said that all poems are occasional in that they are a condensation of a generally present meaning by a provocation: an occasion. The meaning (idea, sense, feeling, vision-of-the-form-of-things, etc.) is helpless not to remain a diffused, more or less impalpable factor of interplay between self and surrounding until something precipitates it, crystallizes it, etc. Suddenly it has a structure. Or rather, the structure that it had, but which was beyond our ken for various reasons (too vast; too unaccustomed or subtle or unprecedented in its organization; too close to ineffable, etc.) is now translated into another structure, nearer to our bodies and habits. A structure that is inspect-able, graspable, yet intimately related to the first and encompassing structure, and composed of at least some of the stuff that composes that anterior and surrounding form.

The “accidental structure”, a concrete concept not unduly paradoxical, can be seen from the above to be linked to the paradox of the unintended intention, and that of the ‘being half-conscious’ of something.

This is not too far from the symbol according to Coleridge and Goethe: something represents something else more encompassing because the first participates in the other’s nature and body. It’s not a sign but to use a favourite metaphor of mine, it’s an ambassador. He comes from and represents his distant, little known, mysterious land and nation. He says some things about and on behalf of the nation directly, clearly, unmistakably. On the other hand, we have to intuit as best we can his childhood, the way he received his nation’s language, what his people’s customs and family life and the smell of their cooking are like, and what was the influence upon him of the land, his local earth. This latter especially—even with the ambassador right here before us—lies truly at the outermost edge of apprehension and expression, since we realize how difficult it is for us to sense and articulate even the influence in us of our own earth, which we know so well, or don’t know, but hold deeper than anything else.

Breton said famously that “beauty will be convulsive or it will not be”. The definition of “convulsive” is not usually attended to. Convulsive beauty is one version, the most condensed, of the modern aesthetic of change and surprise. Beauty is surprise. It is variation. But if there is constantly and only variation, can there be surprise? In a way, but surprise itself becomes the dead sameness of things. Breton illustrates convulsive beauty with a metaphor which let me put in my own way. We have a bomb, a very formly object, sculpturesque: beautiful, in the old way of thinking, beauty a visual category having to do with proportions in the motionless, erotic contemplation, or rather contemplative eroticism, in which the object of desire is still and the motion is that of the eye and of the thought and feelings traversing (caressing) the body, since it ‘can take it in at one glance’ but not entirely, it must cross it and gather it up to do this. Now we detonate the bomb. There is a moment when the flying apart of the bomb is beginning to begin but has not yet finished beginning. The bomb has fully exploded. In fact, the first instant of the explosion is the most powerful and intense: afterwards, there is successive dispersal and diffusion. The bomb has fully and most intensely, violently exploded, but as yet it has not flown apart. It is still exactly as it was, a sculpture. At the same time, it is utterly dissolved in and converted to fire.

Surprise is the appearance all at once of the reality of the body of a thing, unsuspected heretofore in our looking at the body. I have in mind a couple of lines of Paz translated by Eliot Weinberger that illustrate this: “the two halves of each moment, / muddy sorrow, voice of light”. It leaps out at you that death and resurrection are each moment, the one you are in now or any other one later or before, or any one that anyone else is in.

Thus beauty contains the form and stasis that are needed to base and refresh change so that it can be surprise.

Breton proclaimed irrefragable belief in the spot at which all contradictions are reconciled. Convulsive beauty reconciles form and change. Adventure (self-destruction, self-defenestration into the abyss) and the need for safety, security, home: the stable. The reconciliation takes place not on the level of a defense of nostalgia but a demonstration that desire and pleasure require form as theatre of action, a demonstration that, once made poetically, makes plain that it’s not a question of context and actors but of a unitary being.

These concerns—which can be and have been voiced in various ways, many of them not much resembling my voicing and yet paralleling it—always lead me to the reflection that it’s right, logical, that the example of Pound’s The Cantos should be so important for poetry in English, culture in English. They are a prime example. After the Imagist experiment that resulted in self-stranding on various more or less attractive but constrictive islets, this work attempts to build back a comprehensive, adequate form out of a succession of explosions of surprise and beauty. The numinous wholeness of the fragment and the succession of the fragments: newness, a new world of surprise extending into the future, inexhaustible surprise ever renewed. And this is sometimes achieved. On the other hand, in a poem like Canto LXXX the fragments are huddled such that they impede and prevent each other, and speed is cacophony, such that when Canto LXXXI arrives, we are disposed to shout “Beauty!” when the stability of high sentence breaks out: “What thou lov’st well is thy true heritage” and so forth.

Let us hide the frightful gifts of Lord Poseidon

and we know that this is all that survives, nevertheless its stark emergence, its explosiveness, its beauty, is from a vast context. In the titanic silence all around the surviving line about the washed-ashore dead, the whole context of life and its struggle, the song of the Greeks (which remains ours) and its struggle, inheres. The bringing of the context is how the fragment exists: how it “stands forth from”. That is, how it explodes. Explodes while remaining form: beautiful. The Cantos at their best do the same thing, and not only bring the total human context around and through their fragments but the context that Pound himself has created within it. On the other hand, sometimes the work in its quest for surprise and change becomes too exclusively unpredictable and thus suppresses them.

At the end of this, I’ll simply place a personal belief. At this cultural moment, in which only change and development seems real, the chief form of poetic knowledge is the knowledge of the equal reality and importance of stable form. I would even go so far as to say that the poet knows, if only obscurely, that the body and its stability are of superior reality. Change exists only in and as the things that change. The all and nothing of Buddhism, the forces and particles of physics, the abysses of geological history, the creative void and source from which all constantly emerges, are themselves, yes, but primarily they are components of my body and your selfhood as we talk together. This is their existence. The entire arrow of modern inquiry, toward the anatomy and away from the surface of the body, is wrong.

I was invited in this question to quote a poem I find beautiful. I’ve already quoted a fragment from Archilochos. But I’d like to quote a modern poem in the tradition of the composed fragment, the accidental structure, which will be readily seen to know and perform all of the above (and much more). It’s by Ungaretti:

I seek out beauty both in my poems (both in my writing of them and my anxious re-reading of them after they are written) and in life, and my reflections and examples here give some of the ways I try to understand what it is that I’m doing: what I desire and why I desire it. It might be reduced to: freshness and passion for the sake of the ones I love, the things I love, the civilization I still think it is possible to build, transcending suspicion, no mere unstable balance of self-suppression and disorderly greed, hoping the one does not kill the other, but the balance that is splendour: perfect poise of total forces.

A. F. Moritz has written sixteen books of poetry, most recently The New Measures, published by House of Anansi Press.  His previous collection, The Sentinel, won the Griffin Poetry Prize.  He has received both a Guggenheim Fellowship and an Ingram Merrill Fellowship and has twice been a finalist for the Governor General’s Literary Award.  He lives in Toronto.