“The Hacienda must be built.”— Ivan Chtcheglov[1]

Certain entertainments, certain sensate hourly activities, allow us to brush against this information, but most of it remains partial. Encodings must be sought in the serious locales of fingertips and thigh muscles: the hamstrings, the molars, the minor joints, the mammoth comprehending digestion, the ardent and responsive scalp.

The wrist retains a primitive catalyzing database, but it is almost impossible to employ it for axiomatic interconspiracy without also rejuvenating the index finger’s melodrama. There was once a certain charm of lonely tears dripping off a chin into the sea or to the prelinguistic desolation felt on the left side of the torso of one who had enraged a friend, but these responses are in no way adapted to the demands of today’s struggle. For we are sensate in the twenty-first century even if few people are aware of it. Intermittent instructive sensoria can be located—but in the promised land of theoretical disquietude, new feeling incessantly recedes into critique. Everyone wavers between Adorno and the damp unfolding under her own nose.

This need for unreserved solace has always been intimately associated with the need to weep, with each other, from our eyes and in our bodies, and in elusive generous soft rooms and slightly harder squares. One example will suffice to demonstrate this — a leaflet airdropped at Lascaux: 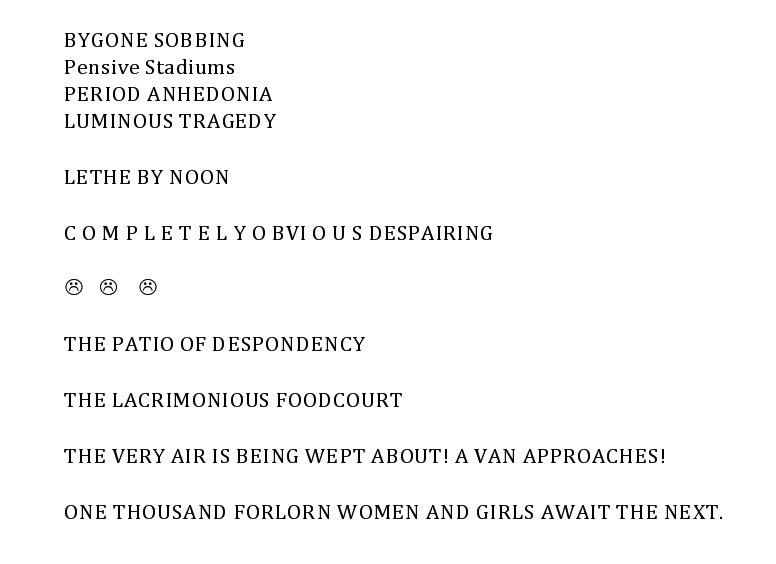 Feeling is the most graceful means of engendering feeling. It is an affair not only of bodily articulation and modulation expressing material remedy but also of a modulation producing reparations of faces, lower backs, shoulders, genitals, and palms in accordance with the actual spectrum of who exists.

The feelings vital to today’s humans will be a means of secreted imperative information and a means of amending the present conceptions of the fixed and necessary location of feeling. The embodied location of feeling is variable. Its nature will change totally or partially in accordance with the will of those who gather together in small, medium, or large groups of humans for the systematic derangement of the sensitivities.

These latest affective advancements would make possible the individual’s unbroken contact with essential common sentiment while eliminating its most disagreeable aspects. The tears of noble children would fall on clean glass ceilings. The rising sighs of the dismayed elderly will trail the daily sun. Mounted on tracks, the chest ache of mothers who grieve can go down to the lake in the morning and return to the suburbs in the evening.

This new regime of feeling will bring forth nothing less than everything.

Anyone thus has the right to ask us on what vision we are going to found our regime of feelings. I will briefly sketch the points of departure:

— A new conception of time (liminal and reparative).

— A new conception of behaviors (ludic and affectionate).

On the foundation of these new conceptions, feeling with each other will, at least initially, be a means of experimenting with a thousand or more ways to modify existence with a view to reparations.

This model of the construction of emotion, which will be the theoretical basis of future constructions, is still imprecise and will remain so until experimentation with patterns of behavior has taken place in sites specifically established for this purpose, sites bringing together — in addition to the facilities necessary for basic coziness and security — temples for weeping charged with evocative power, emblematical edificials, LED screenaries, and elaboratationalist archives of emotionary eventualaries, past, present and to come.

Everyone will, so to speak, feel the feelings of a cathedral. There will be foyers more conducive to anger in one’s fists than any exchange of terrible words, and there will be display halls where people cannot help but adore another’s cheeks. Other buildings will be irresistibly alluring to those whose left legs quiver with dread or those with contemplative lips. Entire cities of sentiment could be envisaged in the configuration of a capricious assemblage of castles for nervous laughter, grottos for the stultified, yurts for burning shame, etc.

Finally, to those who object that a people cannot live in this new order of common emotion, it is useful to recall that in every amalgamation of humans certain types (poets, girls, and mothers) are charged with representing various tendencies of feeling as specialists in sentiment and huddling together in accordance with the dual mechanism of projection and identification.

Our first community[2] would survive largely off income from tolerated and hyper-emotive tourism (special facilities for the feeling of “homesickness” will be provided for these visitors). Naturally, provisional avant-garde activities and productions would tend to gravitate there. In a few years this community would become the tenderness capital of the world and would be universally recognized as such, inspiring many intricate variations.

When we are satisfied with this new order of feeling, there will no longer any paralyzing despair at the rising sun or at its setting. Between the equanimities of the people walking by, the girls will know okayness and the women will know effortlessly eloquent awe. The people and the animals will easily read faces — that gentlest instructive morphology. The war against us will have been given up years ago.

[1] From FORMULARY FOR A NEW URBANISM