In comedy, a “callback” is a joke that makes reference to an earlier joke, to “build audience rapport.” In Bough Down, a hybrid collection you might call prose poetry, lyric essay, or memoir in verse, writer/artist Karen Green employs a constant calling back not for comic effect, but to create a throughline between 184 pages of mysterious prose and collages, helping you piece together a story from crystalline bits of impression and memory. 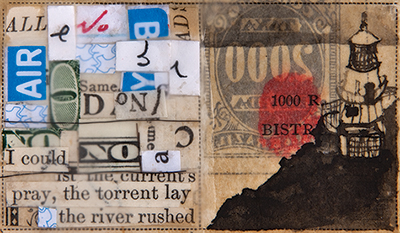 Alice Fulton has called poetry “recursive”: “A poem beautifully, seductively, and partially resists the reader. When poetry resists successfully, it sends you back up the page as much as it sends you forward.” Bough Down feels more like a single long piece than a collection of poems, and the recursion sends you backwards in the book rather than back up the page. (“Callback” is also a programming term, a kind of subroutine.) This is fitting for an elegiac work – written on the occasion of her husband David Foster Wallace’s suicide – and the looping back suggests a mind that keeps replaying memories, both happy and painful.

The first piece in the book reads like the opening of a mystery, calling to mind Kate Greenstreet’s strange, noirish, fragmentary poetry:

The mouth of the Volvo opens to reveal something coiled: cotton paisley affixed to the garden hose with electrical tape. Your simulated overnight bag reeks of American Spirits, a few fuzzy pills caught in the seams. On the back burner, a mercury-filled tooth crumbles. Garden ants draw vibrating, teeming stripes up and down the artichoke stalks. The support guys are in the thick of the starless forest; they catch and release. They call the crows blackbirds. The kind black dog sighs on my shin, sighs on my thigh, relieved and relieved, forever home. Sharpie, ink, humor, hole. Fat widows spin chaos on the patio, their thoracic hourglasses graphic red flags. Here is fruit for the crows, but that will come later.

This seems, initially, almost needlessly elliptical and full of open questions: Why is the overnight bag “simulated”? Is there a real tooth or is that just symbol/metaphor? Who are the support guys, etc.? But this is essentially a description of a crime scene, approached by someone in shock, so not apprehended, perhaps not apprehensible. (Or there’s a refusal to apprehend: “There are hours I refuse to have.”) As we read on, the picture becomes more clear. We learn there are two dogs (a brown one too). “The support guys” are recurring characters, friends of the deceased who try to help in the wake of the tragedy. We learn that the husband was found hanging from a tree – “There is something wrong with the air between the swinging shoes and the dirt” – hence “bough,” hence an obsessive returning and returning to the garden:

The garden and the husband, well, I was confused about what I was keeping alive. The garden fed us all summer long and I thought the thriving was mutual, could be mutual; I was confused. The success of the vegetables was not my priority, and the other thing was not my job after all. My job was humility.

The collages, too, contain echoes and callbacks. They are visually epistolary, resembling pieces of postcards affixed with old stamps. Some seem to contain found text like bits of newspaper or worn books, others bits of the poems themselves, but rearranged or partially erased or made largely illegible, a kind of exposed revision. (A callback is a form of correction, placing material in a new context to provide new resonance and meaning.)

“It’s hard to remember tender things tenderly,” Green writes. It’s both apology and apologia for the memoir – it’s hard to remember things accurately; it’s hard to remember, full stop. Bough Down is as much about memory as it is about grief. Memory of the lost thing is a kind of tyranny – those hours she refuses to have, taking pills to sleep or forget – but also a gift, a form of access to the past she reluctantly accepts as an only option:

Unwrap him like the worst Christmas present ever. Wash hands. Hey, I have a spider bit on my fuck-you finger. Is he really with god?

None of this breaks his heart anymore; he no longer cares that he doesn’t care. Oh the dead do fight dirty and for a while I am sick with fear, but then I get bored. The doctor says this is nonlinear, inelegant progress.

“Nonlinear, inelegant progress” is the kind of progress this prose makes, recursive but persistent. It is messy, but piercing. Maggie Nelson called it “an instant classic,” and fans of Nelson’s work, especially Bluets, will cherish this beautifully made work. 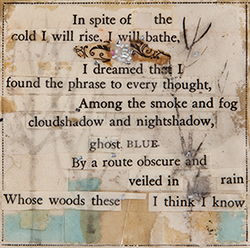 Elisa Gabbert is the author of The Self Unstable (Black Ocean) and The French Exit (Birds LLC).