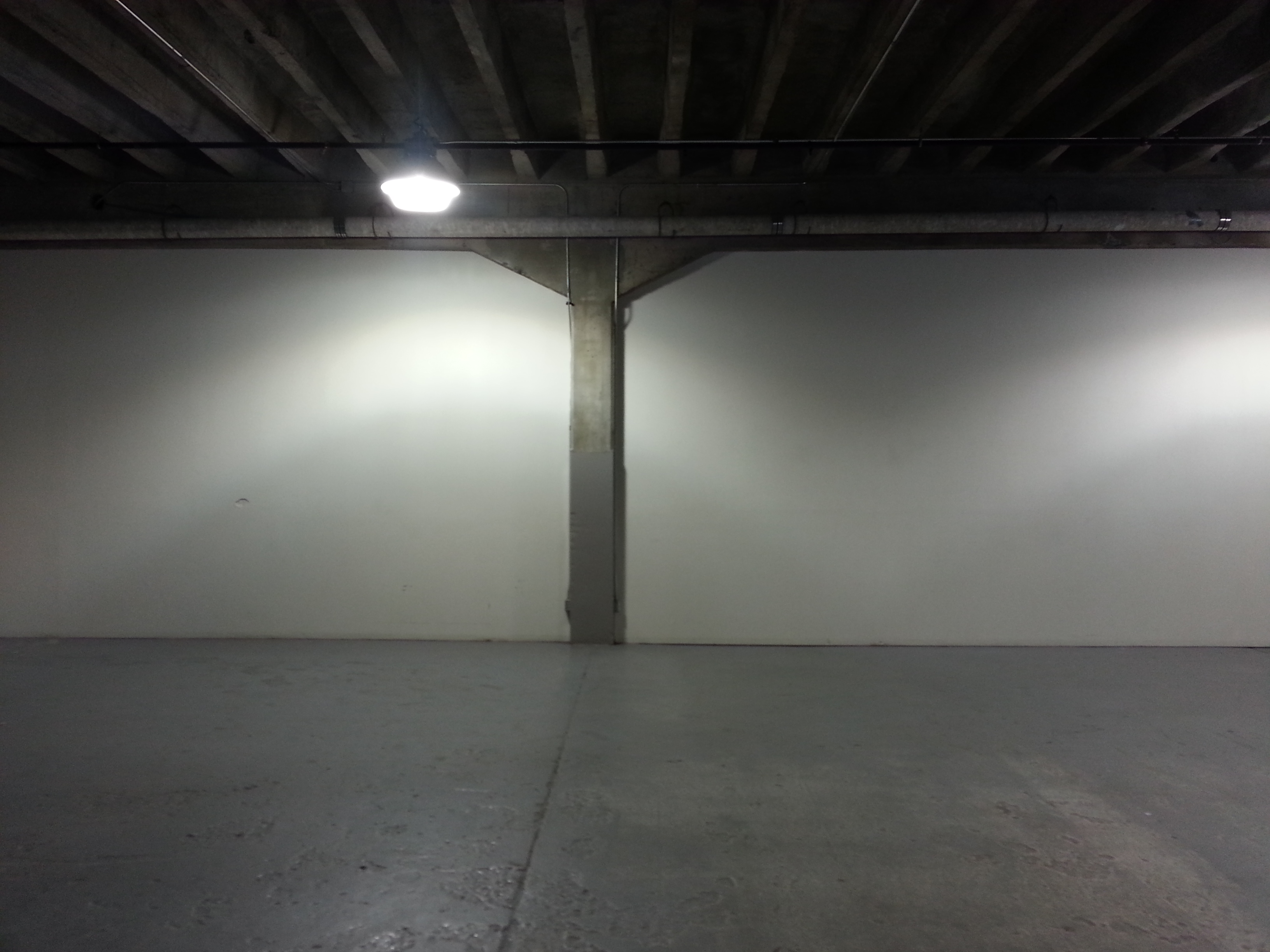 Geneviève Robichaud (GR): You’re curating a Pop-up group show with Margot Ross. What is the show’s intention? What was the curatorial frame/aim? How did you choose the work?

Benjamin Klein (BK): The artists in the show titled ‘Fabrications’ are Laura Anderson, David Arseneau, Pierre Julien, Mathieu Levesque, Simone Rochon and Jonathan Schouela. The space (a warehouse on Ollier just off Wellington in Griffintown) became available recently on a short term basis, and Margot Ross and I decided that doing a show there would be a fun challenge and frankly kind of badass. I’m curating it around the idea of using different approaches to semi-abstraction to activate the formal dynamics of the space, which is quite big and also somewhat unconventional as a gallery environment. There’s a free-form approach to harmonizing the different subject matter/personalities of the selected work, an experimental attitude in the sense of mixing ingredients together with an idea but not a certainty of how they’ll inter-relate. As opposed to other shows I’ve done, there is no definite theme that’s being illustrated here, just some artists’ work I like and admire interacting in a warehouse space.

GR: I find this idea of “activating the formal dynamics of the space” interesting. What does that mean to you? What is it about semi-abstract art that might make it particularly performative in regards to the interior architecture of the warehouse setting?

BK: These kinds of spaces are already the architectural equivalents of a certain rough-edged semi-abstract art in a sense, as opposed to the normative white cube gallery space that does the same thing but in a clean, tight, and cool way. The somewhat rougher edges of this space will pick up and bring out the warmer DIY, and even the more emotionally charged aspects of the work, I’m betting.

I’m hoping that seeing this show will spur some ideas about making as well as showing work. It isn’t an ideological message about ‘abstraction’ but

rather an attempt to be pragmatic about aspects of what that term objectively means.

GR: Pop-up art shows* have been trending over the past few years and they’ve allowed artists and curators, who have less means, to organize exhibitions that are outside the traditional framework of contemporary commercial art galleries, shows that are as equally good and sometimes even better than the more established. Maybe these spaces allow room for more creativity, freedom, and risk taking? What are your opinions regarding this trend? Do you see this as a form of institutional critique? What is its future? What role does it play in contemporary art?

BK: Pop-up shows are a way to side-step the time lag involved in getting to show certain things through the official channels…but it’s not that I think there’s anything wrong with those channels, just that we shouldn’t assume all institutionally shown art is naturally superior or more relevant. I don’t think, to be clear, that there’s a superior locale for innovation to be shown. But we can debut certain things this way, and in the case of already known work, an artist can show openness and courage in putting work into a circumstance that we wouldn’t expect it in. I have no problem with commercial spaces, or any spaces; artists always have to re-balance their autonomy I think, there is no playbook.  That said, I usually would avoid restaurants and cafes.

I wouldn’t liken the kind of institutional critique I have in mind to the kind that term usually refers to, just as I don’t intend to prefer a specific politics to a supposedly less ethical one, like in the work of heavyweights like Hans Haacke or Michael Asher, for example, although they clearly accomplished very important things. One thing I believe in strongly is that art in our time cannot be prevented from colouring outside of the lines so to speak, operating between the channels. There is no linear directive about where to go next and no thinker who could tell us what we need to do. It’s exciting to me to show a bunch of artists together who are not all trying to be within a style or to illustrate a similar theory, but who simply make art in some ways that overlap and others that don’t. Seeing them together can mutually illuminate them all I think. I wouldn’t say much about the future of Pop-up shows except we should do them and judge them as we would a gallery show, if the quality is the same.

GR: Did the space (independent vs commercial) affect any of your curatorial choices? What are some the advantages/disadvantages of showing independently like this, outside the context of a gallery?

BK: As a species of independent, off the beaten track event, I wanted to show professional quality work in a visually strong way, but not as we would normally expect to see it, and to try and provide a fresh appreciation for what can become a routine experience of art in normative contexts. The choice of artists made sense to me both as nicely vibing reflectors off of each other, and providing good interaction with the space itself. I also didn’t want to go too maximal and overload, so each artist will be set off nicely against the large amounts of space around in the room, as well as against each other. Like a band playing where you can hear all the instruments at once as well as listen to the song.

GR: You continue to contribute to the visual arts community in significant ways; most notably, outside your own artistic practice, you not only acted as Associate Director for Galerie Division, but with René Blouin you also founded the Extreme Painting exhibitions, which is now an annual event in various galleries across the city – showcasing some of Montreal’s most exciting (and could we say badass) works. Do you see a crossover or important connections between your work as a curator and your artistic practice? Another angle to the question would be: does your work as a curator affect the way you view your own artistic practice? Do you think about how the work could be shown, its larger context, when you’re in the middle of working on something?

BK: Sometimes I wonder what some people are afraid of. I think Montreal is a more interesting city than it seems, especially thought of in the Canadian context. There are a lot of vital undercurrents here, it’s just that they tend to stay submerged. I have some hope that those sorts of things could see more of the light in the future. It’s not that I’m always thinking about that kind of thing when I’m working on my own stuff, though.

GR: Have you ever wanted to open your own gallery?

BK: No. I’m an artist. I’ve worked in galleries, and it’s not for me personally anymore, although I have a lot of respect for the people who go into that risky business.

GR: What do you and your colleagues talk about when you talk about contemporary art (loaded question, I know)?

BK: That would take forever to get into to any great degree, because I try (and usually fail) to be up on ‘everything’… and I enjoy talking about art, so there’s a lot.

But for me personally with reference to doing a show like this, recently a couple things that have been on my mind are creating a more permissive (and maybe less polite) kind of attitude to some of the stuff here within our scene. I think we need to hell-raise a bit quite frankly, which involves a paradox, I realize, that I enjoy. After all this is art, not war.

And in a related way to somehow draw more international attention to Canadian but really to Montreal’s unique cultural productions. Cities like this can do as much, in my opinion, as the big ones on the international short list, especially in this new information era. Style is international and it’s individual.

GR: What’s a typical day at the studio for you?

BK: I’m not sure if the spirits are people, or fish though. Or maybe neither (or both). Alien selves. Recently I listen to a lot of Lou Reed. Well always actually.

GR: Ben, you’ve been very generous. Thank you for taking the time to mull over some of these questions. Our conversation was a lot of fun! One more question: Besides this show (and the fish), what’s next for you?

Exhibition open November 28 to 30 from noon to 5pm.
Viewing by appointment until December 13th.

Ben Klein is a Montreal-based artist and curator. He holds a BFA in Studio Art from Concordia University and an MFA from the University of Guelph. His work has been exhibited across Canada, in the U.S., U.K and Germany.

*Special thanks to Michelle Furlong for making some very wise suggestions in relation to some of the topics discussed above, and for helping me shape some of my questions around the notion of the Pop-up show.