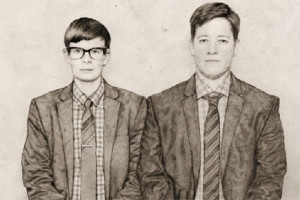 In January of 2008, I heard about a new website that allowed people to post videos of themselves online for the world to see. I was feeling a bit cut off from my own world because at the time I was living in a small town in Germany. I decided to record a video of myself singing in my share house and upload it to YouTube. In the video my hair was in an un- tamed mullet because I didn’t know how to speak German, and I was too nervous to go to the only salon in town because its name was Hair Killer. I was wearing oversize wire-framed glasses from the 1970s, and there was a rack of my laundry drying behind me. I performed an acoustic version of a brand new song I had written called “Come On Forest Fire Burn the Disco Down,” about the ongoing colonialism in Canada. The song is a series of questions asked of people who, like myself, fall in the category of benefiting vastly from the his-tory of Canada being a colony. I was nervous about the song and had rewritten it over fifty times. I thought that posting it would get me some valuable feedback from the public. The video appeared with the description: “Acoustic version of new song recorded in Weimar, Germany, January 2008.” I had always been an independent musician and for the most part sheltered from public opinion about myself due to my lack of mainstream media attention. I knew that I didn’t project the typical image of a male-identified musician, but I thought that performers like Prince had paved the way for my high-pitched voice decades earlier. To my surprise, there was an unexpected landslide of opinions posted about my video. What follows is a list of all the comments that viewers posted that had anything to do with my gender, appearance, or voice. Some of them are hidden from public view because they got too many thumbs down on the site. I think that taken together, they read as a poem of sorts about gender expectations in the music industry.

“Rae Spoon has a vagina.” Reply: “Biological fact, nothing to be ashamed of.”

“nice voice but what is up with your hair”

“For a canadian transgender, Rae Spoon is an amazing singer/ songwriter.”

“did he make this song?? Its really good. i like his voice as well!”

“wow you are like a new Fiest or something you make me think of fiest mixed with amy milan broken social scene should pick you up haha nice work watch out for too much vibratto, by the way”

“I’m a young man and I know you probably love women but I would like to lay in a bed and just talk with you, you seem amazing , lovelovelove”

“at first i thought this was a joke and then you started to sing. i would like to say this song is really good. did you write it yourself?”

“yeah, someone’s gender and sexuality is their own business, the song is amazing you said that, everything else is pointless.”

“I’m just pretending it’s a girl the voice is great anyways, and the guy/ gal is pretty cute :]”

“a bird or a lad? who knows? Awful haircut anyway.”

“you look the dude from into the wild if he were to make it another month or so, but sound kinda like laura veirs”

“good song. but i just dont see you on tv. you look like someone from wonder years. but hey youre still awesome! peace.”

“Great voice girl, you have to look more like a girl if you want to succed. Thats how the world is :-/ ”

“A GIRL???? i know LOL. I was wondering the same thing myself”

“was expecting myself to laugh at this video, but this is pretty good :o”

“Dude- wtf? He’s so hot. Not everyone has to look the same.”

“wow, is this original? you could go far … granted if you changed your hair and got contacts. (:”

“Yeah , it sounds great! Like the woman of the cranberries ^^”

“youre the first person ive seen who has a mullet and large glasses and some how pulls it off. …thats a compliment. sweet song”

RAE SPOON is a musician/writer/workshop facilitator originally from Calgary, AB. Rae has been nominated for a Polaris Prize, toured internationally and released six solo albums, the most recent being My Prairie Home (2013). Rae is the author of the Lambda Literary Award finalist First Spring Grass Fire. They are the subject of a National Film Board documentary entitled My Prairie Home, which was released in Canada in 2013 and debuted in the US at the Sundance Film Festival in 2014. Rae lives in Montreal, QC. raespoon.com