In an essay called “Against Decoration,” Mary Karr makes a case for using “decoration” in poetry – figurative language, sonic beauty – only in service of a greater purpose, what she takes to be the “primary purpose” of poetry: “to stir emotion.” “Delight in dense idiom or syntax,” she writes, is a secondary purpose (50).

Further, she claims, the problem with many contemporary poets (this essay was published in 1991) is that they favor decoration over emotion and clarity. “In my view,” Karr writes,

emotion in a reader derives from reception of a clear rendering of primal human experiences:  fear of death, desire, loss of love, celebration of being. To spark emotion, a poet must strive to attain what Aristotle called simple clarity (56).

Using a James Merrill poem as an exemplar of typical New Yorker-friendly, neoformalist verse, she rattles off five or so ways that it displays a “lack of clarity” and therefore does not “earn the right” to its “glittery pushpins of language and metaphor” (55). These ways include:

While I’m sympathetic to some of these ideas, I’m very resistant to Karr’s basic assumptions about what poetry is for and how those means are accomplished. In particular, I don’t agree that the primary purpose of poetry, or any art, is to stir emotion (do people really need help having emotions?), and further, I don’t agree that clarity on the level of character and setting are crucial components of a poem. Karr seems to think that poems necessarily look like the world (have verisimilitude) and are loyal to a verifiable reality (communicated via “key facts”).

To borrow a phrase from Karr, in my view, poems—like all other art forms—are about making meaning. Art is expansive because there are so many kinds of meaning and so many ways of creating it. Emotional meaning achieved through clarity is a valid goal for art, but it can’t be the only goal. It would rob us of huge chunks of music and visual art, as well as most poetry. (John Ashbery is the poster child for “lack of clarity” in poetry, but I don’t go to Shakespeare for clarity either.)

Julia Cohen is a good example of a young poet who is working outside the tradition of narrative clarity. In a feature for the Poetry Society of America, Cohen recently wrote: “My poems are not narrative in the traditional sense. There is not an identifiable plot. The story of treasure-seeking children has been pared down to a single, first line of the poem above. But I hope an emotional and philosophical arc can be detected.” The primary goal, then, of Collateral Light, recently released from Brooklyn Arts Press, may in fact be to “stir emotion.” But Cohen achieves emotional impact not through clarity of setting and character but through accumulation of association, the way keys in music or swaths of color in an abstract expressionist painting stir emotion indirectly.

When Cohen’s poems work, they build a world that draws you in through specificity rather than clarity – we may not know “what is happening” on a linear level, but the pieces we can see are clear and exact. Let’s look at a poem in full, the last one from the book’s second section (48):

YOU’VE HANDED ME SOMETHING THAT WILL NEVER DRY

Scrape of a vintage empire          wax & cola
How do I explain hiding in the lumberyard
as cloth on your knuckles?

The poem is not beholden, documentary-like, to reality, and so it’s possible for the “action” of the poem (action as a series of images, like “montage theory” cuts in early film) to take place in two (or more) settings at once – one a room with a table, another a lumberyard with “tree-turrets.” The lumberyard can exist inside the room as a kind of portal, the way a photograph in a museum gives you a view into another place. Each line or cluster of lines feels like a photograph – a slice of time and space that gestures toward its own history. But the histories themselves are not in the poem, and don’t need to be. If the poem were a puzzle for the reader to decode, “one would no more reread such a poem than one would bother reworking an acrostic already solved” (Karr 51). But this poem does evoke emotion (to me, a sense of desperation of memory), and it does invite re-reading, because there is no answer to the riddle; the incompleteness is part of the point, the undeveloped photograph that will never dry. 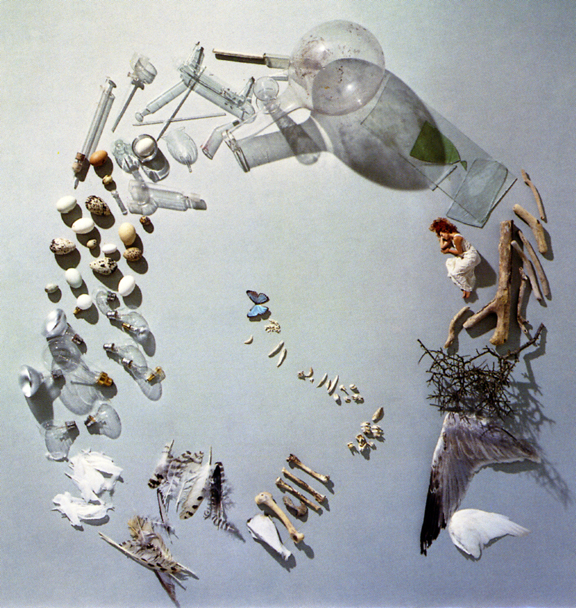 The room (or diorama, or Cornell box) is a good model for a Cohen poem, and her poems are almost anxiety-inducing in their messiness at times. They are cluttered with detail and “stuff,” objects chosen not for their function but for their names and suggestiveness: “bloody paper & the voyeur”; “the luxury pond”; “legroom              flyleaf”; “my wooden knife.” There’s a dark but fanciful whimsy that reminds me of Tori Amos lyrics – contrast these Cohen lines from page 47:

Simplicity of the greatest feat: hurt
as few as possible            Dry the heart’s fog
Hold tight & how to let go

Valves open        close
The fullness of a Siberian pear

With these lyrics from “Space Dog” (on Amos’s second album, Under the Pink):

New characters are entering and exiting continuously. There is no one setting. Instead, we enter a fluid dream-space where everyone and everything is morphing, and it’s impossible to tell what is a symbol and what is merely random neuronal firing. But with or without clarity, Cohen’s dream-like, associative verses find room for flashes of wit (“Death is the opposite of dying slowly”) and artistic epiphany (“Now beat back against what you made”). And you emerge from them with feeling.

Elisa Gabbert is the author of The Self Unstable (Black Ocean) and The French Exit (Birds LLC). Follow her on Twitter.