“Eye Rhymes: An Introduction to the Photography of Janieta Eyre,” Suzanne Zelazo

As an innovator and agitator, Janieta Eyre (1966–) has pioneered an integrative photographic aesthetic that pushes the boundaries of creative forms and subjectivity to confound ontological certainties. She deploys the currency of her own body not only to subvert a gendered objectification, but also to challenge the extent to which we are imprisoned by our own subjective projections and identifications. 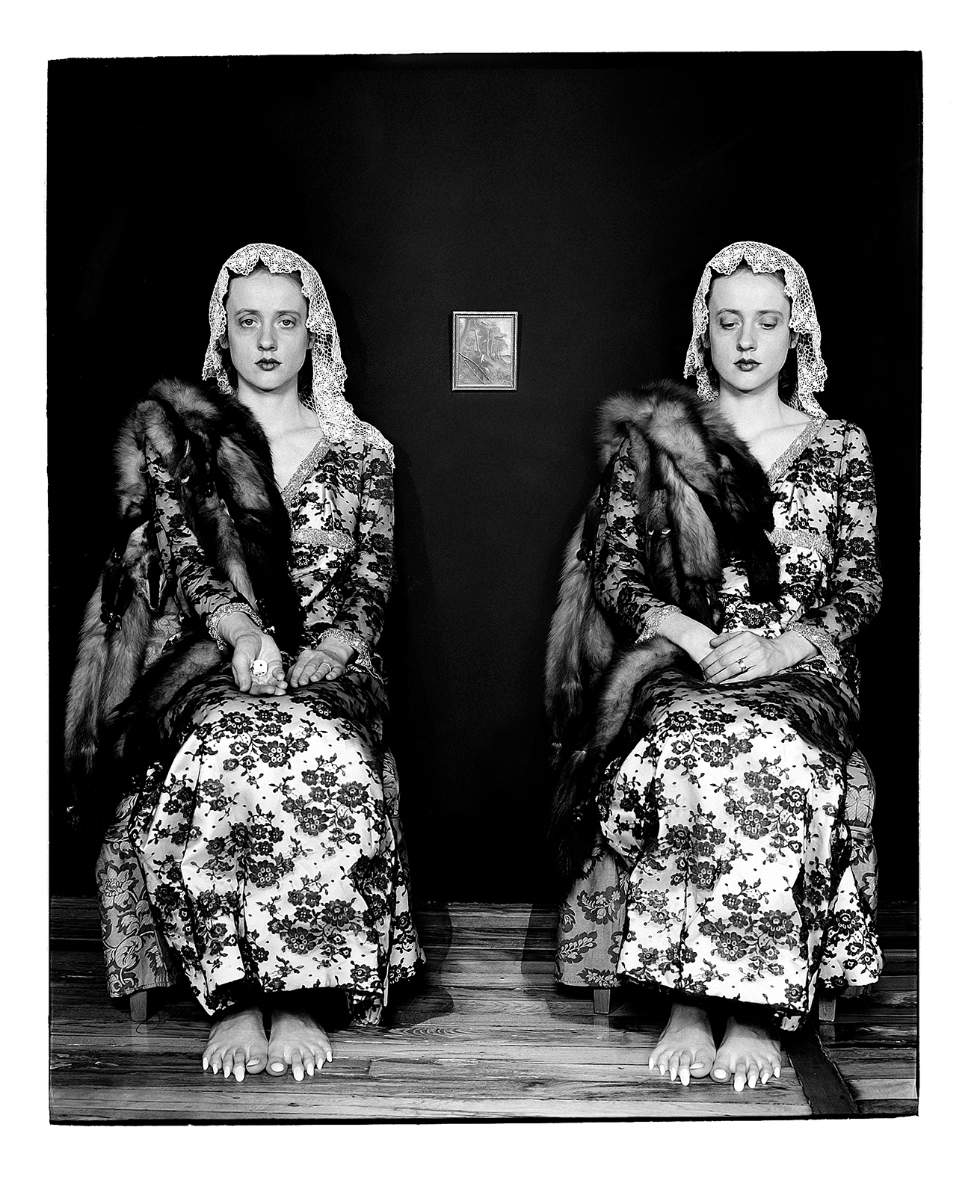 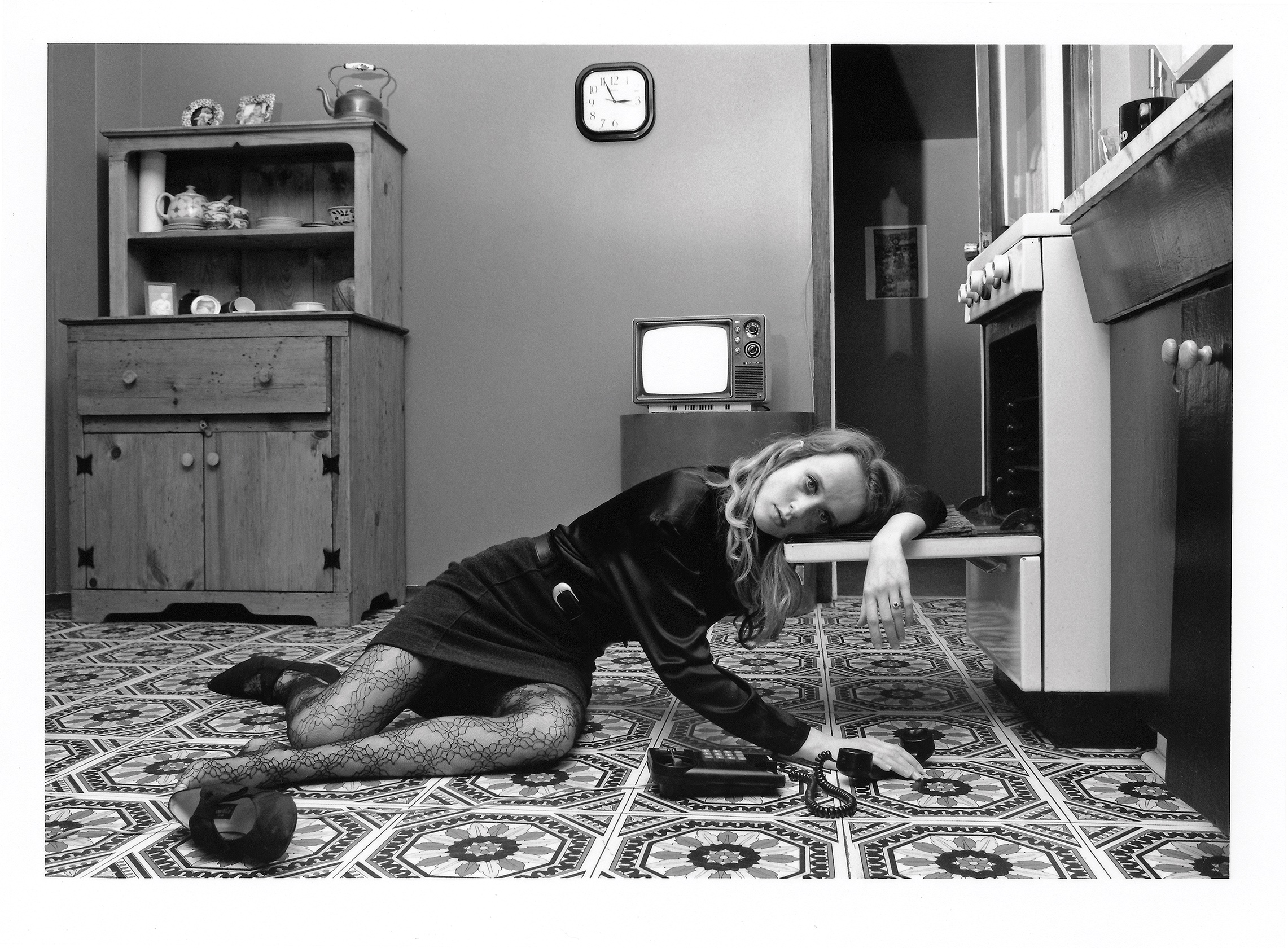 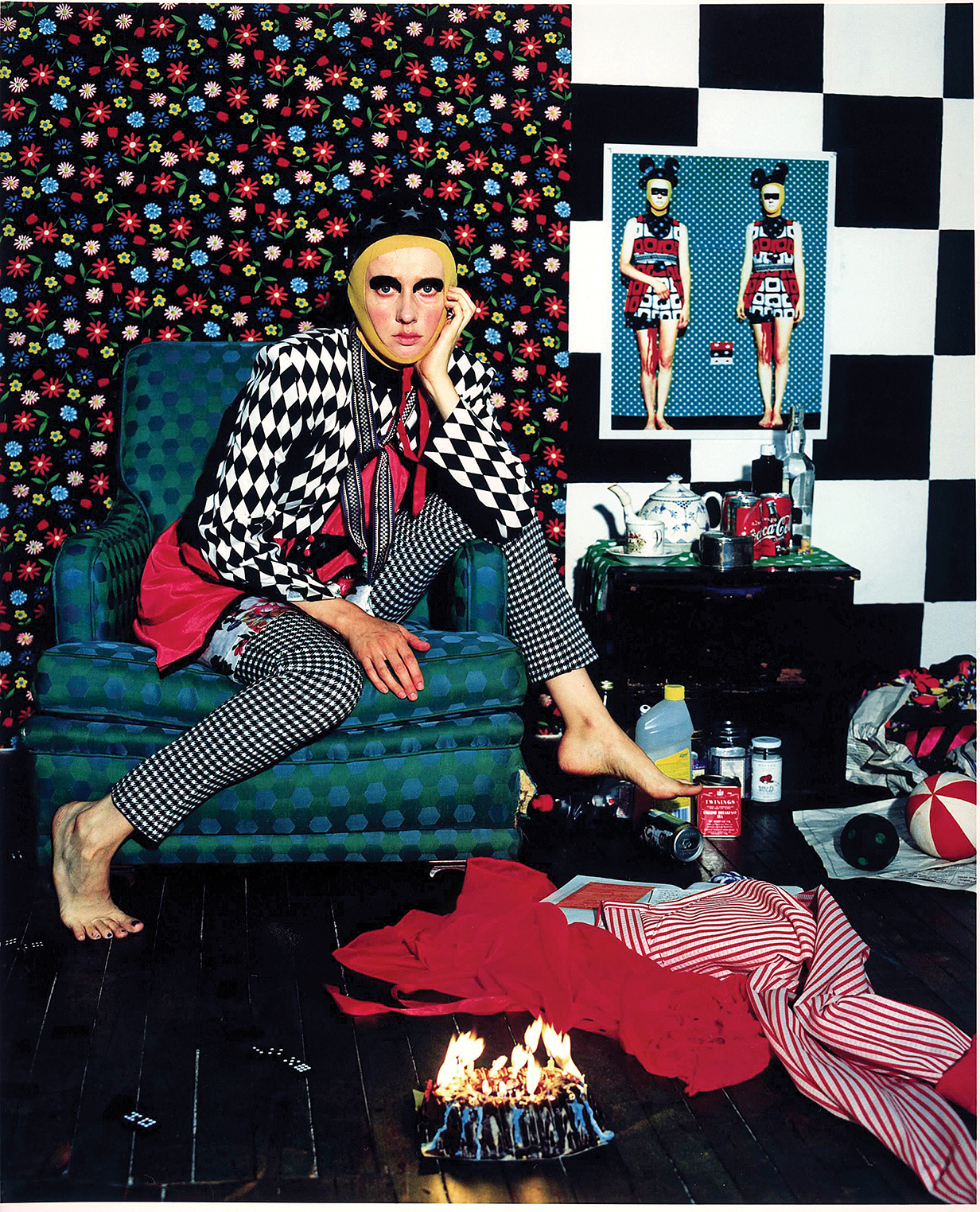 Although she is recognized primarily as a visual artist, narrative functions prominently in Eyre’s photographs, creating highly nuanced image-texts. Her work underscores the fictional nature of autobiography and memory even as it highlights how the often limiting stories we tell ourselves about ourselves nevertheless retain a strong hold over self-understanding. Effecting a Bakhtinian dialogic, the heteroglossia1 of the photographs invokes a lineage of feminist experimentations in photography by artists such as Hannah Maynard, Suzy Lake, Francesca Woodman, and Cindy Sherman.

In the years since I first published Eyre’s work on the cover of the literary magazine Queen Street Quarterly (where I was the editor), I have repeatedly returned to her work. The cover featured a jarring portrait entitled Motherhood (2000), from her eponymous series, which depicts the artist cradling a severed sheep’s head wrapped in a blanket. What has continued to strike me about Eyre’s photography is the extent to which the visual elicits the sonorous. It is as if one can ‘hear’ Eyre’s work in the act of apprehending the images with one’s eyes. They sound a defiant and celebratory – if not shocking and terrifying – explosion of heteronormative signification. It is precisely because of this synaesthetic interplay that her portraits could be said to push beyond the two-dimensional space of the photograph into the realm of performance. Yet Eyre is also a talented accompanist. She guides the viewer – offering herself in meta-artistic refraction as subject, creator, and curator – through the complexity of her photographic explorations such that the experience becomes one of collaboration rather than mere spectatorship.

Eyre’s work ruptures the very notion of mimesis even while performing its principles. Seeming to incarnate from the very material folds of her hand-sewn, carefully arranged costumes and backdrops, Eyre, as subject, enacts a living collage only to dissolve and so eschew those representations in a plurality of becoming. Her experimentation with mimesis offers insightful theoretical observations of the gendered making and unmaking of language – visual, linguistic, and embodied forms of expression – to powerfully subversive ends. Eyre’s photographic enactment recalls French feminist theorist Luce Irigaray’s insistence on the usefulness of mimesis as a form of resistance in a gendered hegemony:

To play with mimesis is thus, for a woman, to try to recover the place of her exploitation by discourse, without allowing herself to be simply reduced to it. […] It also means ‘to unveil’ the fact that, if women are such good mimics, it is because they are not simply resorbed in this function. They also remain elsewhere…2

For Eyre, this ‘elsewhere’ is the negative space of the photograph, which is always just as readable as that which is immediately visible. Even when, as the subject, Eyre looks directly at the viewer, she instantiates that negative space of the photograph through her own act of looking. Eyre’s work beguiles. As photographer, subject, and viewer, Eyre offers herself as a screen, her body a kind of Shroud of Turin on which the viewer sees not the face of Christ but his or her own. These reflections comingle with the various histories of art that viewers bring to bear in the ‘intersubjective’ 3 act of art making and consumption.

1 Mikhail Bakhtin, ‘Discourse in the Novel,’ in Literary Theory: An Anthology, 2nd edition, ed. Julie Rivkin and Ryan Blackwell, (Oxford: Blackwell, 2004), 674–685. In this essay, Bakhtin explains the inherent interaction of multiple discourses that always become inter- woven in language, yielding layers of signification: ‘Thus at any given moment of its historical existence, language is heteroglot from top to bottom: it represents the coexistence of socio-ideological contradictions between the present and the past, between differing epochs of the past, between different socioideological groups in the present, between tendencies, schools, circles and so forth, all given a bodily form. These “languages” of heteroglossia intersect each other in a variety of ways, forming new socially typifying “languages.”’

3 Siri Hustvedt, Living, Thinking, Looking (New York: Picador, 2012), 347. In her discussion of artist Joseph Kosuth and her awareness of his youth and interest in Ludwig Wittgenstein, Siri Hustvedt engages Maurice Merleau-Ponty and refers to the personal ‘intersubjective’ knowledge bank we bring to bear in art appreciation. She writes: ‘The Tractatus and years of boyhood spent in a mental institution are part of the intersubjective and linguistic fabric that clothes my perception as I think about what it is that I’m actually seeing.’

from Incarnations: the Photography of Janieta Eyre, Coach House Books 2017, edited by Suzanne Zelazo, used with permission from the press.